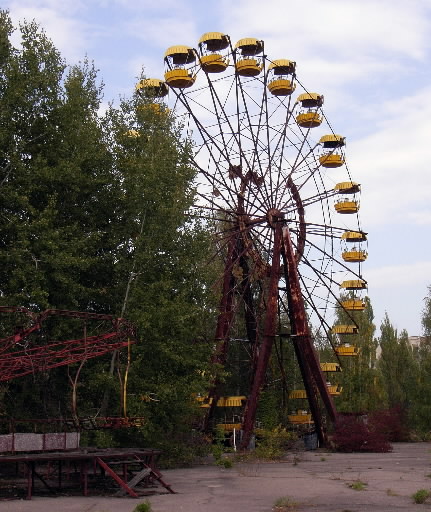 “It was indeed a beautiful city, with its forests and rivers. There were a large number of young people, and the city was full of energy.” Those forced to evacuate from Pripyat to Kiev reminisced over their lost city, one after the next.

The city of Pripyat was constructed in 1970. It was located amid isolated wilderness, about three kilometers to the northwest of the Chernobyl nuclear power plant. Roughly 50,000 people lived in the city’s rows of five-story, nine-story, and 16-story apartment buildings.

But an explosion that took place before dawn on April 26, 1986 completely upended their lives. At noon on the following day, April 27, a message was delivered by radio, instructing the population that they should evacuate the city “for about three days.” Without being informed of the details of the nuclear accident, the people began to be evacuated at 2 p.m., boarding 1,100 buses that had rolled in from throughout Ukraine to transport the residents.

One man, who was ten years old at the time, got on a bus with the tennis ball he had been playing with. “I’ll be able to return in three days,” he recalls thinking. But it would be an exodus from the city that had been the boy’s home. At the time, the level of radiation in Pripyat reportedly exceeded 30 millisieverts per hour.

A no-man’s land for 26 years, the city has fallen to ruin. The invisible radiation has transformed Pripyat into a ghost town.

The town square, ringed by hotels, restaurants, and a cultural hall called Energetik, is now a scene of desolation. Poplar trees have broken through the concrete ground, growing thick. The windows of the apartment buildings are barren of glass.

An organization located in Kiev is a base of mutual support for the evacuees and serves as an oasis for the suffering of the former Pripyat residents. At the office of this group, known as “Zemlyaki,” I listened to an elderly couple tell their story. They both had worked for the nuclear power plant.

They told me that the people of Kiev look upon the evacuees from Pripyat with envy as a result of the relief measures they receive. The evacuees were given units in apartment buildings on a priority basis, but some Kiev citizens have complained about the preferential treatment, contending, “It’s unfair. Kiev is contaminated, too.” In one instance, the couple was ordered by a taxi driver to leave his car when they told him that they had come from Chernobyl.

The evacuees say that they suffer more from the stress that they have faced in the wake of the disaster than from their fears of radiation exposure.

Currently, a variety of relief measures offer support to the evacuees, including a higher pension, reduced rates for public utilities (by half), a food allowance (about 21 U.S. dollars each month), and subsidies for health-related travel. But they all agree that access to mental support, as well as material support, is vital for their lives. Regarding the accident at the nuclear power plant in Fukushima, some of the evacuees voiced criticism of the measures taken in Japan, saying, “They haven’t made full use of the lessons of Chernobyl.”

The disasters at Chernobyl and Fukushima differ in terms of the reactors themselves, their structure, as well as the cause of the accidents. They cannot be compared so simply. However, in one way there is commonality: The fact that information was concealed, and action was delayed, exacerbated the damage.

As for the effects of the unleashed radiation, it may take decades, even centuries, before the answers are clear. Because the future effects of low-dose radiation are not well known, and this is a source of anxiety for the people of Fukushima, we must confront the reality of the Fukushima disaster by taking to heart the lessons learned from the experience and research involving Chernobyl, which have grown over the past 26 years.