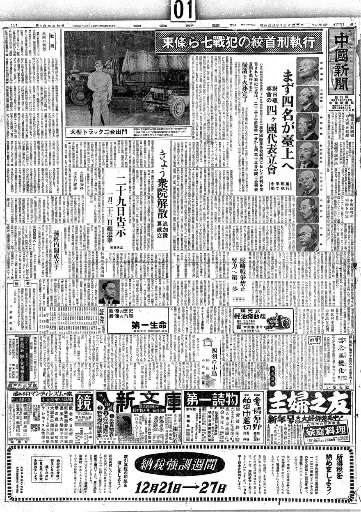 In 1947 Jitsuichi Yamamoto, president of the Chugoku Shimbun, and Masafusa Yamamoto, vice president, became subject to the edict purging certain people from their positions. At the time, the Chugoku Shimbun was a general partnership company, and the holdings of the two men represented nearly 75 percent of the company. Because they were partners with unlimited liability, even if they resigned they would not be mere shareholders.

They struggled to figure out how to handle the situation. They decided to create a new company, shift the right of management to it, and then lease the land, buildings, machinery and equipment of the general partnership company to the new company. They put together a proposal to form a limited liability company and make it a joint-stock corporation later, and submitted the proposal to the labor union. At times like that I was amazed by my father’s ability to grasp a situation and how quickly he made decisions.

In January 1947, when Jitsuichi stepped down as president, the company was changed to a limited liability company, and in November of the following year it began operating as a joint-stock corporation. The representative director was Tomoichi Tsukifuji, who was manager of the company’s Business Department and remained in that post. Akira Yamamoto was named a director.

The union executives tore into us saying, “A newspaper company that has no printing presses is inconceivable.” Then came December 1948.

On the 2nd, the union demanded one month’s basic wages (8,084 yen) as a year-end allowance. On the 11th, the company responded with an offer of 50 percent of the basic salary and another 1,000 yen as crisis relief funds. On the 13th, the union demanded to see the company’s books, and the next day they demanded that the company allow the union to bring in an accountant to examine them. The company rejected these demands. On the 17th, Mr. Tsukifuji addressed all of the employees. At 6:10 p.m. the union declared a strike and we entered into a conflict. We decided to put out a tabloid edition and asked the department managers for their cooperation. We stayed in the Sera Ryokan, a Japanese inn, (near the company offices).

On December 18 the union dumped all the type (from the type cases) onto the floor and obstructed operations under the pretext of a clean-up. The company immediately protested and the type was replaced (in the cases). On the 19th, the union’s lobbying of the department managers became more aggressive. The tabloid edition could not be published that day.

On the 21st, Lt. Buckingham of the (Occupation’s) Chugoku District Military Administration came to the company’s offices. He got up on a counter with his military boots on and gave a speech in which he urged the union to bring the strike to an end promptly. The union members responded by singing “The Internationale.” The lieutenant gave up and left.

Jihei Yoshida, 90, who worked in the editorial department of Yukan Hiroshima, said, “Everyone was strongly opposed to the U.S., which had dropped the atomic bomb, and to its occupation policy.”

Nobuko (Mr. Yamamoto’s wife) wrote this in her diary: “December 17: A strike was called at the paper. Father (Jitsuichi) said, ‘We should wash our hands of the Chugoku Shimbun, and Akira should find another job.’ I will follow you no matter what path you choose to take.” “December 22: I finally went to the paper, but you were in a meeting and I couldn’t see you. You are young, so keep your spirits up. Hang in there.”

On the morning of the 22nd, the company, the department managers and the union entered into discussions to see whether there was some way to reach an agreement. Around 7 p.m. that evening the employees held a rally on the first floor (of the company’s office building). They vented their frustration and then came to the Deliberation Office. During that time the union called out each department manager individually and shouted at them saying, “Are you the union’s enemy or its friend?” It was truly a kangaroo court and just one step away from a riot.

I thought the department managers and the union would create a divide that could never be bridged. Or else the board of directors would be isolated, one or the other. Kazuta Iwasaki (manager of the Administrative Affairs Department, later president of Radio Chugoku Company) came to me and said, “Please just give them (what they’ve asked for).” If the hard-liners among the managers felt that way, we would be able to reach an agreement, so I was happy.

At 5 a.m. on the 23rd, the strike was settled and production of the morning edition began. We put out an extra edition with a headline saying, “Hideki Tojo and six others hanged for war crimes.” So we were unable to issue the paper for a total of three days. (The morning edition was not issued December 20-22, but publication of Yukan Hiroshima was suspended December 18-23.)

The union members sang “The Internationale” and rejected the attempt by the officer from the military government to persuade them to end the strike. They had such clout that it seemed there was nothing they couldn’t do. The company was thought to be at the mercy of the union after that. But that was not the case. That’s what makes life interesting.