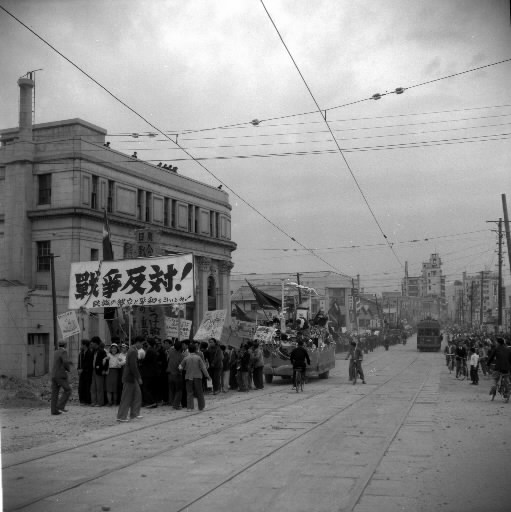 On March 29, 1949 Major (Daniel) Imboden, Chief of the Press Division of GHQ (General Headquarters of the Allied Forces) came to the Chugoku Shimbun offices. He issued a warning to management and lectured all employees, including those of the evening edition (Yukan Hiroshima, which was published by a separate company). In his warning he said that General MacArthur had repeatedly stated the need to get rid of Communists. He also questioned why management had transferred various responsibilities to the union, which was controlled by Communists.

GHQ’s occupation policy, which also regulated the newspaper industry, became increasingly anti-Communist as a result of the rapidly growing labor movement and the Cold War between the United States and the Soviet Union. According to a history published by the Japan Newspaper Publishers & Editors Association on its tenth anniversary, Imboden, who had run a newspaper in California, “began to adopt a contemptuous attitude” toward Japan’s newspaper companies.

Then came the summer of 1950. On July 28 (following the start of the Korean War in June) the first “Red Purge” of newspapers was carried out in Tokyo. GHQ’s decision had been made. (A total of 336 people at eight newspaper companies were simultaneously fired.)

At 3 o’clock on the rainy afternoon of July 29, Masao Tsuda, executive director of the Japan Newspaper Publishers & Editors Association, secretly came to Hiroshima. He met with Tomoichi Tsukifuji, the paper’s representative director, and others. That evening the president of the Ehime Shimbun came to Hiroshima, and the next day the vice president of the Sanyo Shimbun arrived also. Mr. Tsuda said he had come to tell us about the Red Purge of newspapers outside Tokyo to ensure there would be no misunderstanding. I took notes on everything he said.

According to a supplement to the 1980 bulletin of the Japan Newspaper Publishers & Editors Association, Mr. Tsuda, who later became ambassador to Argentina, held a gathering for the presidents of newspaper companies throughout the Chugoku-Shikoku Region in Okayama on the 30th and explained the Red Purge. There are some discrepancies with Mr. Yamamoto’s account, but there were very few instances in which executives recorded details of the purge.

“On August 5 all members of the Communist Party, those who are secretly members, Communist sympathizers and others stipulated by the company will be fired. This is an order from Col. (Jack) Napier (Chief of the Government Section) of GHQ. Implementation of the order will be left to the president of each newspaper company, but arrangements have already been made by the National Regional Police, and this matter is outside the realm of Japanese law. The terminations will be carried out based on a letter by Gen. MacArthur (to Prime Minister Shigeru Yoshida on July 18 in which MacArthur ordered the indefinite suspension of publication of Akahata, the official organ of the Communist Party). Party members are being investigated by the CIC (Counter-Intelligence Corps) and the police. Employees are to be told that their termination is in line with MacArthur’s intentions and that there will be no discussion of the matter. Nothing more should be said.”

At 3 p.m. on August 5, 21 employees (including four women) were told they were being terminated. They all refused to accept the order and descended on Mr. Tsukifuji’s office. CIC people came and began shouting.

The 6th marked the anniversary of the A-bombing. I talked it over with my family and decided to take the day off. Nobuko and I visited the grave of my brother Toru (who was killed in the A-bombing). In the evening I got a phone call saying that nothing special had happened. (That year’s Hiroshima Peace Memorial Ceremony had been cancelled).

The next day the remaining employees were fairly calm. Those who had been purged gathered at Sawa (a nearby coffee shop) and looked in on the company offices. The union had told them that nothing could be done. The 21 people met with Haruo Kasai (managing director). They took their severance pay and the notice of their termination and left.

On the 9th, there were rumors about the relationship between the president and other officials of the Chugoku Shimbun Labor Union and me. They said I had leaked information. I let them say what they would. I was doing what I felt was right and believed it was for the good of the company. Later the issue of compensation for the Red Purge arose, but there is no doubt that the activists had gone and that labor-management relations were stabilized as a result.

Kineo Matsuoka, 87, one of those who was fired, said, “The U.S. military’s order took precedence over the Constitution, and even those who were not activists were run out. I was dogged by the Communist label for a long time.” According to a history of the labor movement published by the Labor Ministry, a total of 704 people at 50 newspaper, wire service and broadcasting companies were purged.