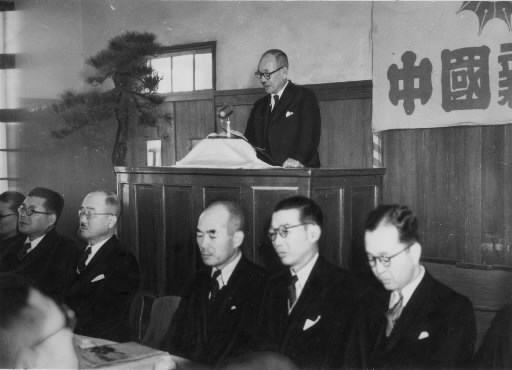 Part 17: Father’s death
Secrets of one who embodied the post of president

On October 13, 1950, Jitsuichi Yamamoto received a special exemption from the purge of officials. (At the order of the General Headquarters of the Allied Forces more than 208,000 people (including civilians) were removed from their posts.) After my father returned to his post as president, although it struggled, the company’s business steadily improved.

In 1955, 10 years after the atomic bombing, the Chugoku Shimbun Company remodeled and expanded its offices in Kami-nagarekawa-cho (now Ebisu-cho, Naka Ward), which had been burned out. The eighth newspaper industry convention was held there.

In May 1952 Radio Chugoku (now RCC Broadcasting) was founded, and Jitsuichi Yamamoto was named president. (Broadcasting began in October.) In November of the following year new broadcasting facilities opened in Kami-yanagi-cho (now Hashimoto-cho, Naka Ward). Private television broadcasting was finally approved, so we applied for a license and became rivals of Hiroshima Telecasting Co. If Radio Chugoku had a weak point it was that Jitsuichi Yamamoto served as president of both the newspaper and the radio company. Some people believe that it is not desirable for organs of public opinion to be in the hands of certain powers.

At that time my father’s health was quite poor. He was troubled by the problem of the distribution of stock, and his doctor told him to lower his stress. After discussing it with my mother, I decided to take advantage of the issue of his holding two president posts to reduce his burden somewhat. He wasn’t happy about it, but I felt there was no other choice and that it was my last resort.

In 1957 Jitsuichi stepped down as president of Radio Chugoku. Television broadcasting began in 1959. Hiroshima Telecasting launched its station in 1962.

Few people loved the company as much as he did. Perhaps it was his pulmonary congestion or the sleeping pill, but one cold day before the coming of spring my father was unusually agitated and talked nonstop for four or five hours. He expounded on how the president should behave and what was unacceptable as president. He was not his usual cool, calm self, but I had to listen respectfully. Rather than his last wishes, I had the feeling he was conveying to me the secrets he had learned over the years.

One could not carry out the social responsibility of the president of a newspaper company without that sort of strength. On the other hand, I pitied him a little for this awareness as president, which was burdensome. But of course my father ended his life feeling satisfied. At that time I was 39. I felt I was fortunate to have been able to learn the spirit and method of management from my father firsthand.

I don’t think my father was considering anyone other than me to succeed him as president. He was proud to have taken over as representative partner at the request of Saburo, founder of the company, and was confident in that role. In Jitsuichi’s family serving as president was taken for granted. The proper thing would be for me to take over, but I wasn’t sure I should stress that.

After attending the Buddhist memorial service on the seventh day after my father’s death, I consulted with Tomoichi Tsukifuji (president of Radio Chugoku) and Shigetoshi Itokawa (managing director of the Chugoku Shimbun Company) in an effort to make up my mind. Mr. Itokawa said, “The thing Jitsuichi (company president) feared most was that discord (over who would succeed him) would impede the growth of the company.” Mr. Tsukifuji agreed and said, “You should step aside.”

At an emergency meeting of the board of directors on September 24 I recommended that Masafusa Yamamoto be named president, and he recommended that I succeed him as senior managing director. This was announced in the morning edition the following day.

My father’s friend Zenichi Matsui, a lawyer, came to the newspaper’s offices and said to me, “Your dad is praising you saying, ‘Good going.’” After that I felt more confident about the action I had taken. I couldn’t become president right away, so until I did the best thing would be for me to undergo training and work toward a prosperous future for the company. And I began to feel that that was what my father would have wanted. I decided to work very hard.