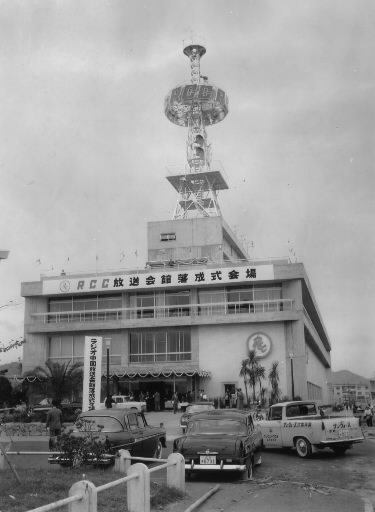 Part 18: Newspaper and broadcasting
Reliability of news: Bearing it in mind

In November 1958 the shareholders’ meeting for Radio Chugoku was held at the Shin Hiroshima Hotel (which was located in Peace Memorial Park). The chairman said, “With the death of Jitsuichi Yamamoto (in September) there is one vacancy on the board. How shall we handle the appointment of a replacement?” Yoshikazu Tanaka (president of Sanyo Wood Preservative) immediately said, “I would like the chairman to appoint someone.” Whereupon the chairman, Tomoichi Tsukifuji (president of Radio Chugoku), said, “I appoint Akira Yamamoto, senior managing director of the Chugoku Shimbun.”

Radio Chugoku (RCC) began broadcasting in 1952. It was the 16th commercial radio station in Japan. With the promulgation of the Broadcast Act in 1950, the Asahi and Mainichi newspapers cooperated with the Chugoku Shimbun in the establishment of the station. Jitsuichi Yamamoto, then president of the Chugoku Shimbun, assumed the post of the company’s first president. In 1957 he was replaced by Mr. Tsukifuji, according to a history of the company published on its 50th anniversary.

At the board meeting that followed I said, “I am humbled by this honor. My father ended his days having devoted his life to the newspaper, but he was interested in commercial broadcasting, and even after he stepped down as president and was sick in bed, he was considering its future. I believe my father is glad that I was selected to fill the vacancy on the board resulting from his death. I would like to express my sincere appreciation for your consideration.”

Mr. Tanaka said to me, “I was angry when Radio Chugoku refused to make a donation for the municipal baseball stadium (which was built in 1957 with funds provided by 10 companies in the Hiroshima business community). I was impressed that your father had the newspaper company put up the 5 million yen instead.” I was the one who recommended that to my father, but I didn’t think I would be repaid for it in this way (by being named to the board of directors).

Radio Chugoku began television broadcasting in 1959, and new broadcasting facilities were built (in what is now Moto-machi, Naka Ward) in 1961. At that time there was a series of capital increases. While under pressure to pay the inheritance tax on my father’s holdings, I also had to provide funds for the capital increases. I had the feeling that I was being set upon so that I would not be able to maintain my father’s holdings. I was determined not to be defeated. I had the people who had been holding my father’s shares return them to me and put them all in my name. Once the capital increases ended, I was the top individual shareholder, following the three newspaper companies.

At the party celebrating the completion of the broadcasting facilities, the subject of how promising the broadcasting business was came up. Kokyo Shiraishi, president of the Kyoto Shimbun, who was present at the party, later came up to me and said, “It’s not a matter of whether newspapers make money or not.” I was in agreement with his view. Newspapers may not be able to match radio or television in terms of their ability to get the news out quickly, but they have reliability. We manage the newspaper in order to bring prosperity to the region or—on a larger scale—the nation with little thought of making profits for the company.

In February 1967 the matter of changing the name of Radio Chugoku came before the board of directors. The company was also doing television broadcasting, so it was felt that the name should be changed to one that was more inclusive. A board member from the Mainichi Shimbun surveyed the employees to find out their preferences. Some wanted the name to convey an awareness of “global Hiroshima,” while others wanted to take “Chugoku” (which can also mean “China”) out of the name because it sounded like the broadcasts were from China. Suggestions were also submitted for names with “Hiroshima” written in katakana or names that included “Seto Inland Sea” or “Far East.”

I went to see Mr. Tanaka, who had proposed changing the name of the company, and said, “It will be a problem if you take ‘Chugoku’ out of the name. I can’t agree to that.” I went around getting everyone on the Hiroshima side to band together against it. On the day of the meeting, when the matter of the name change came up, Mr. Tanaka started off by saying, “Let’s have each person comment on this matter.” So each person, including the outside directors, stated their opinions. In the end the name “Chugoku Broadcasting” was the overwhelming favorite.

In 1988 the Chugoku Shimbun and the Asahi Shimbun swapped the stock they each owned in Chugoku Broadcasting and Hiroshima Home Television Co. (which began broadcasting in 1970) and further promoted their partnership in RCC.