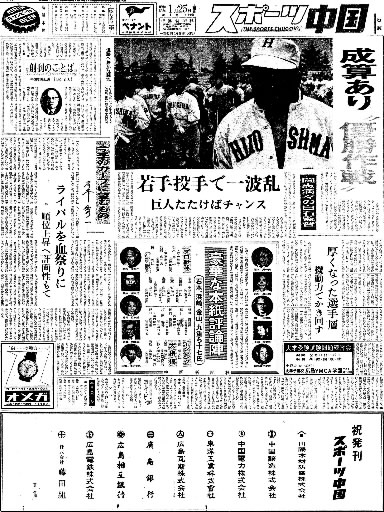 The year of 1963 was devoted to the matter of a sports newspaper. At a board meeting soon after the New Year’s holiday Masafusa Yamamoto, company president, said, “Let’s put out a sports paper.” He wanted to get it out as soon as possible. It was an order. No one could understand it at all. The president seemed impatient. Every time there was a meeting he flew off the handle and then left the room.

From the start, Takeshi Okazaki, manager of the Personnel Department, said it was out of the question, but in the meantime he presented an idea to start publishing a sports paper in February of the following year. He said it took time for newly hired graduates to learn the ropes, and the issue of excessively heavy labor during that time would have to be negotiated with the union. The decision to put out a four-page paper was not reached easily. The existing sports papers were all 8 to 12 pages, so breaking into the market was not a sure thing, but from a labor standpoint we couldn’t try to do too much at first.

As a senior managing director, I fretted about whether or not we should put out a sports paper right up to the very end. The Olympic Games were to be held in Tokyo in 1964. One could argue that that offered a good opportunity, but what about the relationship with the Chugoku Shimbun?

Instead of creating a separate bureau, a sports department was set up to put out the paper, and Takashi Hiraoka (later mayor of Hiroshima) was made manager. After pondering it all night, Hiraoka said, “If we devote our energy to this sports paper, how much will that contribute to society?” I wondered that too. Many times I asked the same question: Why do we have to put out a sports paper? And each time I was bawled out by the president. If I opposed the plan we would clash, so in the end I compromised.

The first issue of Sports Chugoku was published on January 25, 1964. It cost 5 yen per copy. “The Chugoku Shimbun had priority on articles from the Kyodo News Service,” said Takashi Hiraoka, 84. “And articles that should have been coming in from cooperating papers took a long time to arrive. The seven of us in the department worked ’til dawn for days on end to put out the paper amid a lot of constraints.” At one point more than 50,000 copies were printed.

In the bonus negotiations in the winter of 1964, the company responded with a description of its financial condition, which showed that while revenues had increased by 12 percent, expenses had increased by 17 percent. This was primarily due to the 28.9 million yen loss posted by Sports Chugoku. Bonuses were raised by only a small amount. Eiichi Hoshika, president of the labor union, said, “Can management sit around acting unconcerned at work despite bring about losses of tens of millions of yen?”

The Deliberation Office, primarily, considered what to do about Sports Chugoku. I spent all my time in meetings every day. It would not be easy to cease publication. Revenues would be zero, and there would still be labor costs. (The company had hired 112 employees, including regular hires, to put out the sports paper.)

On December 18 the directors gathered and debated the issue from morning to evening. In the end it was decided to go ahead and discontinue publication. No one spoke up in support of continuing the paper. The president listened without saying anything. He simply said flatly, “We have no choice.”

On the 28th, I gave the news to Hiraoka and the top three officers of the labor union. We were not in a position to take two or three years to get back in the black. We urgently needed to move forward on constructing a new office building, a long-range, large-scale project. So we decided to cease publishing the sports paper. It wasn’t that the paper was bad. Kazuo Tsuda, sports editor, wept and said, “We didn’t try hard enough.” I painfully sensed the responsibility of an executive.

One of the selling points of the Chugoku Shimbun was its sports coverage, particularly articles on the Hiroshima Carp. Dividing that coverage between the Chugoku Shimbun and the sports paper was just not as good. The negative effects had slowly but steadily appeared.

The business was launched although its prospects were uncertain, and the employees devoted themselves to it. But all they got in return was an unhappy ending. The project was pushed through against my opposition. Why couldn’t I have made a decision like this at the start? No matter how much ill feeling there would have been, I should have abided by what I believed in. I will never forget the events leading up to the launch and the discontinuation of the sports paper or my responsibility as an executive that went along with those events.