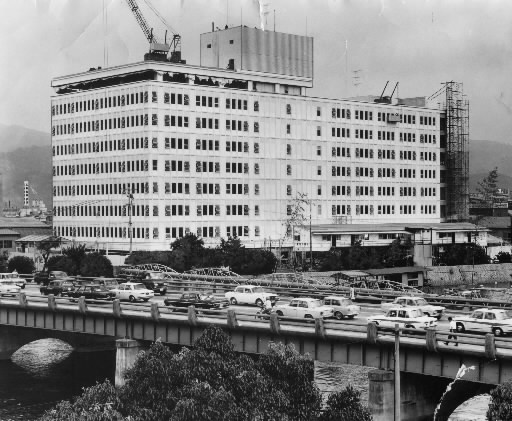 Part 21: Installation as president
Respect for people as goal

For about two years after we bought the property in Dobashi-cho through the end of 1967 I spent all my time working on preparing the construction plans for the company’s new office building. After purchasing the property owned by the Hiroshima Prefecture Federation of Livestock Agriculture Cooperative Associations (now the Hiroshima branch of the National Federation of Agricultural Cooperative Associations) and other parcels, we also acquired the surrounding private residences.

The purchase price came to 340 million yen, and the property had a total area of 930 tsubo. (One tsubo equals 3.3 square meters.) The plans for the building were to be based on how many pages the paper was to be and how many copies we would print.

We decided on a target of 24 pages and 500,000 copies. (The morning edition surpassed the 300,000 mark in 1968.) The first phase of the work involved installing 18 presses. Paper would be fed from the second floor of the basement, and the presses would be located on the first floor of the basement and the building’s first floor. Dispatch was to be on the second floor with typesetting (page make-up) occupying the third floor and the editorial offices on the fourth floor.

Ultimately the building had two floors below ground and nine above, but Tadashi Murata, the head of Murata Sogo Architect & Associates, had designed a high-rise building, and strongly recommended a 15-story building with 13 floors, and a two-story rooftop structure. Even if we kept it to nine floors, there would be 5,000 tsubo for the company’s offices and another 1,500 tsubo for other tenants for a total of 6,500 tsubo. By adding a wellhole that expanded from the seventh floor to the ceiling of the eighth floor it would come to 7,000 tsubo. If we went with 13 stories it would be the tallest building in Hiroshima.

From the start the building was designed with construction costs of 200,000 yen per tsubo, and we discussed the conditions with Kajima Corporation (which would do the construction work). We could not spend more than 1 billion yen on the construction of the portion of the building for the newspaper’s offices, which we decided would be 5,000 tsubo. If space for other tenants were included it would come to 7,000 tsubo, and the figure of 1.4 billion yen came up, but in the negotiations we said we wanted that portion to be paid through the cooperation of others and for the deposits to be paid by the contractors.

The thing that everyone fretted about to the end was whether or not to bring the old presses to the new building. The No. 1 press in particular held a lot of memories. It had been brought back from Nukushina (Higashi Ward), where it had been taken for safekeeping, and supported the lives of all the employees after the A-bombing. But we had no choice. We wanted to build a clean, functional building and put out the paper in a comfortable working environment using advanced machinery and equipment. We decided to dispose of the old equipment and replace it with all new equipment.

Construction of the Chugoku Shimbun Building (with total floor space of 20,830 square meters) began in February 1968 and was finished in September 1969. The move to the new building was completed on the 23rd of that month. The company’s former office building was torn town, and in 1973 the Mitsukoshi department store opened on the site.

A board of directors meeting was held on October 31, 1969. In order to implement a chairman system, the regulations for the board were revised, and Masafusa Yamamoto was made chairman. I was named president. No one expressed any objections.

After the board meeting I visited the graves of the company’s first president and my father. My mother wept with joy. Perhaps she had been waiting for the day when I would be able to visit my father’s grave and report that I had become president. I couldn’t have been happier to have been able to do that while my mother was still healthy.

On November 1 we gathered the employees in the auditorium of our office building, and first the chairman and then I made remarks.

As the day drew nearer, I thought about what I would say with respect to what I most wanted to do as president. It may be trite, but I wanted to show respect for people. That is most important and is the basis of my philosophy. I decided to state that plainly. So I made “Respect for People” the topic of my address upon assuming the office of president.

Akira Yamamoto was then 50 years old. In his memoirs he put down the remarks he made upon his appointment as president in their entirety. He closed by saying,

Newspapers are put together by people. I want to cultivate human resources, put the right people in the right jobs and develop ability. You and I are devoting our lives to this company. Everyone has but one life. There is no going back. So I want to make this a company where work is truly enjoyable and worthwhile. In order to do this, I will call on the wisdom of many people, and I ask for your cooperation in this endeavor.