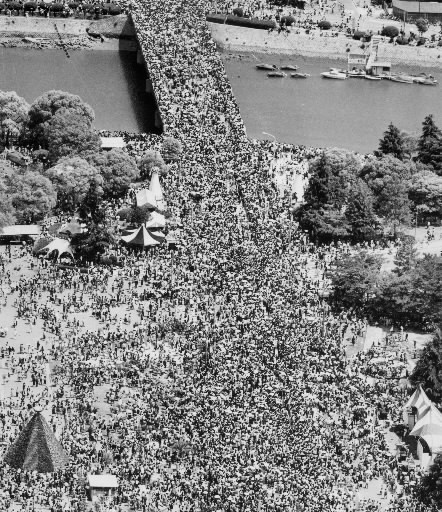 In 1969 a total of 45 new employees came to work for the Chugoku Shimbun. One of them was Ichiro (Mr. Yamamoto’s son). He had hoped to study in the United States as one of his professors at Keio University had recommended, but he was important as my heir. So I asked him to come to work for the company first. He seemed to have trouble making a decision, but he took the written test and had an interview and then came to work without trepidation.

He was 176 cm tall, weighed more than 100 kg and had rugged good looks. He was a warm, serious person. People felt at ease just having him around. That wonderful Ichiro died. On the night of his wake I wept freely. But upon thinking there could be no greater grief, I pulled myself together. I had to keep going for Ichiro.

Ichiro Yamamoto died of meningoencephalitis on February 27, 1976. He was 29. At the time of his death he was manager of the planning section of the General Planning Office.

There were several things that Ichiro wanted to do for Hiroshima; one of them was to create a festival. According to notes he left, he wanted residents to share joy and the preciousness of peace at the festival and he wanted to make it a regular community event.

Hiroshima was destroyed by the atomic bombing. Ichiro wanted August to be a month of “stillness” during which people prayed reverently. But 30 years had passed since the A-bombing, so he felt perhaps May could be a month of “motion” in which people shared the preciousness of peace and the joy of being alive. So he wanted the festival to have an international scope and for local citizens to play a leading role.

He decided it should take place on Peace Boulevard with the street closed to traffic for several days. He had spoken to Gov. Hiroshi Miyazawa. Yonezo Oshita, manager of the Chugoku Shimbun’s Events Administration Department, and Koichiro Kanai of RCC Broadcasting and others had gathered materials on festivals in Japan and abroad and discussed the matter on several occasions.

According to Koichiro Kanai, 72, who later served as president of RCC Broadcasting, “Ichiro had been formulating the idea of a new festival in Hiroshima ever since the days when we were both working at our companies’ Tokyo offices. Even before the 1975 parade celebrating the first championship of the Hiroshima Toyo Carp, he had been making a case for a festival along Peace Boulevard.”

At the Buddhist memorial ceremony on the 49th day after Ichiro’s death, it was made known that Gov. Miyazawa and others wanted to organize the festival. Hiroshima Mayor Takeshi Araki came up to me and said he wanted to hear the details later. So Jiro (Mr. Yamamoto’s son, then assistant manager of the Events Administration Department, now chairman of the company) met with the mayor and outlined the idea behind the festival and how it would unfold. Jiro worked hard to prepare a plan based on Ichiro’s notes and negotiated with the prefectural police. The name “Flower Festival” had been written in Ichiro’s notes.

The prefecture took a fairly positive stance toward the project, but Mayor Araki was cautious and said, “Things are moving too fast.” On September 14 I held a meeting with the governor, the mayor, and Katsuhiko Yamada (vice president of Hiroshima Bank), president of the Hiroshima Chamber of Commerce and Industry, at the chamber’s offices. We finally reached agreement to hold the festival in May of the following year and announced it at a press conference.

It was a new field in which I was inexperienced, and I had all sorts of thoughts about it. It was essentially a project of the Chugoku Shimbun and RCC Broadcasting. (The two companies bore the costs for the festival, each putting up 25 million yen.) So neither the local business community nor the news media was cooperative. In a written statement and newspaper articles, we were attacked for our plan to have the Self-Defense Forces band participate.

As the first (1977) Flower Festival neared, I felt under a lot of pressure. For that reason I’ll never forget how happy I felt on the morning of May 3, the first day of the festival. Thousands of people had gathered on Peace Boulevard under sunny skies, and they all seemed to be enjoying themselves.

The festival began with the lighting of the flame of peace atop the tower of flowers and a moment of silence. Naomi Sagara’s performance (of the festival’s theme song, “Hanaguruma”) was good, and crowds pressed in on Agnes Lum (a Hawaiian celebrity). I rode in the parade of flower-covered cars, and it took more than two hours from the time we left until we reached the end. A total of 1.25 million people turned out for the three-day event. It was a tremendous success.