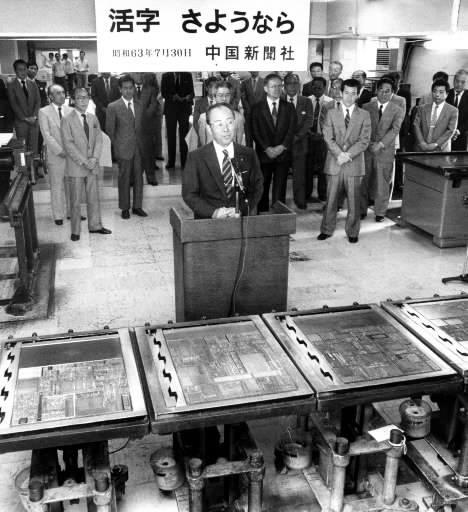 Part 23: Abandonment of letterpress
Delay could lead to later trouble

The 33rd National Newspaper Convention was held in Hiroshima in October 1980 for the first time since the 8th convention was held in the city 25 years before. The Chugoku Shimbun had grown. At a workshop titled “Japan’s Newspapers and the World,” I introduced projects we had undertaken over the preceding 10 years.

These projects included the production of an English-language version of the film “Hiroshima: A Document of the Atomic Bombing” to mark the 80th anniversary of the founding of the paper in 1972. Copies of the English-language version of the documentary, which had been produced in cooperation with the City of Hiroshima, were donated to 14 major newspaper companies throughout the world. Other achievements included the launch of the Flower Festival in 1977 and the establishment of the Hiroshima International Cultural Foundation. Starting in 1979 the foundation provided support for a program under which reporters from local papers in the United States were invited to Hiroshima and Nagasaki. (A total of 34 reporters were invited over 10 years.)

After the conference had ended, I went to Tokyo to tour the new offices of the Asahi Shimbun in Tsukiji (Chuo Ward). Working with IBM, they had completed the switch to computerized typesetting (CTS) and changed over to offset printing at the same time. I felt that if we didn’t switch to computerized typesetting we would lag behind our competitors in the future, but I also thought about the kind of money I had heard would be required.

Research into the computerized processing of articles and photos began in the late 1960s and ultimately led newspapers to abandon letterpress printing. In 1978 the Nihon Keizai Shimbun became the first paper in Japan to make the switch, and the Asahi Shimbun followed suit in September 1980, according to “Media no kobo” by Takao Sugiyama and other sources.

The Chugoku Shimbun needed to switch to both CTS and offset printing. In 1976 a Newspaper Production Development Division was created and research proceeded. Circulation of the morning edition was approaching 600,000. (It surpassed that mark in 1982.) I couldn’t decide which we should adopt first: CTS or offset printing. But I decided to introduce offset printing first because the pages would look sharper and color printing would look better.

In March 1983 we broke ground for our Inokuchi Plant at the industrial center in Hiroshima’s Nishi Ward, and in December we held a ceremony to mark the start-up of the offset presses that had been installed there. They had been manufactured by Mitsubishi Heavy Industries. In January of the following year we began printing the evening edition at the Inokuchi Plant, and from April we printed one fifth of the morning edition copies there.

All that remained was to make the switch to CTS. We intended to do it right away, but starting in April 1984 advertising revenue continually fell below the levels of the previous year. In 1985 more and more newspapers began to switch to CTS. In particular, in Osaka the national papers were reportedly going to take the plunge simultaneously, so I felt that if we delayed any longer it would create problems in the future. In my New Year’s remarks I announced that a decision on which system to use would be made that year.

The systems manufactured by IBM and Fujitsu had been coming down in price for several years. When we first began to formulate a plan, we were told the cost would be 5 billion yen, but ultimately the cost was less than 2 billion. The Chunichi Shimbun and Hokkaido Shimbun had purchased IBM’s basic software and then added features that they had developed in house. The Fujitsu system was adopted by the Hokkoku Shimbun and the Kyoto Shimbun.

At a board of directors meeting in February (1985), we decided on the Fujitsu system. Several people strongly recommended IBM, but Fujitsu had experience with medium-sized papers, and I felt it offered advantages in terms of customer support. I also hoped we would be able to integrate it with our computerized administrative system (which had gone into operation in 1975). The final estimate was less than 1.7 billion yen, and we told Fujitsu that the system should be in place by late 1987.

We had to enter into negotiations with the union about what sort of training should be carried out and how we could make a smooth transition to the computerized system. A fair amount of resistance was expected, but there had to be a common-sense approach we could take. I felt we would gain the union’s assent and understanding in any event.

Tetsuo Nagayasu, 80, first head of the Newspaper Production Development Division, said, “Computerized typesetting revolutionized newspaper production, and with the investment in equipment it was a major undertaking. The employees shared a sense of crisis.” The shift to the “Phoenix” typesetting system that the Chugoku Shimbun used was made with the morning edition of August 1, 1988. The shift to offset printing was not completed until 1995.