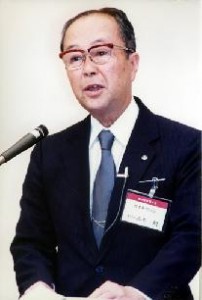 Part 25: Living as a newspaperman
Asserting beliefs without fear

We won the 1985 Japan Newspaper Publishers and Editors Association (NSK) Prize in the features series category for “40 Years after the Bombing” (“700 People of Danbara” and “Akiba Reporters”). The selection subcommittee unanimously recommended us for the prize saying, “The Chugoku Shimbun is highly commended for exercising its responsibility as the newspaper of Hiroshima and for compiling a multitude of facts in the course of its reporting.”

The prize was presented to Wataru Imanaka, news editor, at the 38th National Newspaper Convention, which was held in Shizuoka in October. That evening Imanaka and Yukio Ogata, managing editor, came to the room where my wife and I were staying and asked me to open the envelope containing the gold medal. It was a weighty moment.

In January of that year a gang member fired shots into Mr. Yamamoto’s home in response to a campaign by the Chugoku Shimbun to rid the community of organized crime. Mr. Imanaka, 76, said, “I rushed to the president’s home, and he said, ‘Go ahead and write what must be written. Don’t worry about this.’ He was a true newspaperman.”

At 6:33 a.m. on January 7, 1989, the emperor passed away. The Chugoku Shimbun printed 670,000 copies of a special edition reporting his death and distributed them to all the paper’s readers. “Heisei,” the name of the new era, was announced at 2:37 p.m. We issued another special edition for that.

The 43rd National Newspaper Convention was held in Kanazawa in 1990. At that time Yosaji Kobayashi, chairman of the NSK (president of the Yomiuri Shimbun), was recuperating from an illness. (As vice chairman of the association) I went to visit him, and he asked me to take over for him at the convention.

The convention got underway in October at the Kanazawa Bunka Hall. After my opening remarks on behalf of the chairman, the NSK prizes were awarded, and I stepped forward to present them to each of the winners. The second person was Kunihiro Shimazu, who represented a team of reporters from the Chugoku Shimbun. They were recognized for a series of feature articles entitled “Exposure: Victims of Radiation Speak Out.”

Before we launched the series, Mr. Ogata said, “We’ll have to spend a lot of money.” I said, “Don’t worry about that. Go ahead.” In fact, nearly 20 million yen was spent on travel expenses, which was no wonder because the reporters went to 15 countries and 21 regions around the world. Nuclear test sites and nuclear waste disposal sites are located in remote areas, but the reporters dashed off to those places without complaint.

When accepting the award, Mr. Shimazu said, “My predecessor, the late Toshihiro Kanai, said, ‘Nuclear weapons are known for their power but not for the human tragedy they cause.’ I felt our assignment was to convey this earnest belief.” Through his remarks I could see that the tradition of Hiroshima reporters had been passed on, and that made me happy.

Mr. Yamamoto’s memoirs end with his account of this convention. He made no reference to serving as chairman of the National Election Administration Committee or receiving the Grand Cordon of the Order of the Sacred Treasure in 1991. Excluding his rough draft, his memoirs consist of 1,018 sheets of 200-character manuscript paper. The preface that Mr. Yamamoto added after finishing his memoirs concludes this way:

I have never once wished I’d been anything other than a newspaperman. Of course it has not all been fun. Thinking about it now, there may have been more hard times than good times. I have tried to record the course of events honestly. I feel that because I was a newspaperman I was able to gather my courage and assert my beliefs or persevere through difficulties.

My father constantly preached the social responsibility that comes with running a newspaper. He pounded it into my head. He and my kind-hearted mother lavished attention on me. I loved my wife and four children and have been loved by them. After we lost our son Ichiro, I never spent a day apart from my wife. I feel a measure of relief at being able to leave behind this certain testament to the fact that a man named Akira Yamamoto lived and has come this far with his wife Nobuko.