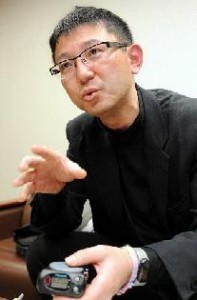 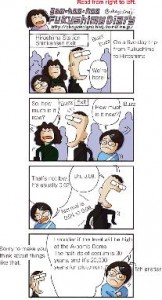 Life in Fukushima introduced in cartoons and essays

Shuji Akagi, 44, a high school art teacher in the city of Fukushima, has produced a series of 4-panel cartoons and essays on raising his daughters and his family’s everyday life. Starting today the Chugoku Shimbun will publish his “Boo-hoo-hoo Fukushima Diary” monthly. It illustrates the concerns of the people of Fukushima and what they need in the aftermath of the leak of radiation from the Fukushima No. 1 (Daiichi) nuclear power plant operated by the Tokyo Electric Power Company,

Mr. Akagi’s wife, 45, is also a high school teacher. They have two daughters, an 11-year-old in the fifth grade and an 8-year-old in the second grade. Because of their concerns about radiation resulting from the disaster at the nuclear power plant, their daughters have been living with their grandparents in the city of Aizu Wakamatsu in Fukushima Prefecture since May of last year.

It is about 80 km from the city of Fukushima to Aizu Wakamatsu and takes about an hour by car. While continuing to work in Fukushima, Mr. Akagi and his wife take turns visiting their daughters. Sending their daughters away to live placed a great burden on the couple, and they discussed it at length before coming to that decision. Their daughters, who were reluctant to change schools, accepted their parents’ decision and began attending a new school.

“I may consider the risks of radiation contamination too seriously,” said Mr. Akagi. He said that in the city of Fukushima how people regard the risks and what they think about moving out of the city vary widely from person to person. “If you don’t know where the other person stands, it’s difficult to raise the subject of radiation contamination,” he said. “If you have different ideas on the subject, there’s friction. It’s really a shame.”

At the end of last year, Mr. Akagi brought a group of students to Hiroshima to meet with people in the art community here. His family accompanied him on the five-day trip. “I felt that even in Hiroshima, which experienced the A-bombing, the concerns of the people of Fukushima were not well understood. I want to convey Fukushima as it is through my cartoons and essays,” he said.

These days, people in Fukushima are more likely to inquire about the ambient radiation than someone’s age or the temperature. If you say “0.09,” there’s no need to refer to the unit. Everyone knows it’s microsieverts per hour.

Before the disaster at the nuclear power plant, the normal ambient radiation level in Japan was 0.04 to 0.08. But in the city of Fukushima now, it’s about 0.10 inside concrete buildings and from 0.60 to 1.00 outdoors. It’s not unusual to get readings of anywhere from 5.00 to 20.00 under rain gutters or in ditches alongside roads. For us the fact that there is radiation all around us has become part of our everyday life.

The last panel is about the half-life of radioactive materials. The amount of time it takes to disintegrate by half varies depending on the type of material. For cesium 137 it is 30 years, and for plutonium 230 it is 24,000 years.

My fifth-grader daughter thought that since the A-bomb was dropped on Hiroshima in 1945, there must still be radiation there. I didn’t know what to tell her about that. The people of Fukushima have to think about these kinds of things as information that has a direct bearing on our lives, our future and our health.