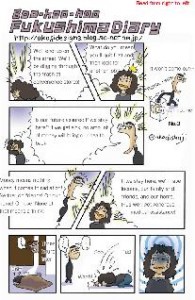 When we went to Hiroshima in December of last year, I often brought up the subject of “nuclear disaster divorce.” Most of the people I met had never heard of such a thing.

I wonder how many quarrels there were between husbands and wives in 2011 in Fukushima Prefecture – or in eastern Japan for that matter. I suspect that most couples don’t talk about their arguments. But I don’t think the quarrels my wife and I had are unique in Fukushima Prefecture. I imagine that after the earthquake there must have been millions of “nuclear disaster arguments” behind closed doors – not just between husbands and wives but also between parents and children and between relatives.

In most of the elementary schools in the downtown area of Fukushima City, just under 10 percent of the students transferred to other schools in order to avoid radiation. Whether 10 percent seems like a lot or a few is purely subjective. But, even if there is serious bullying involved, changing schools is a drastic measure I think.

In the case of most of those who sent their children to different schools, the father stayed behind in Fukushima City while the mother and children moved to an apartment in a city at a distance, such as Sendai, Niigata or Yonezawa in Yamagata Prefecture. Not only does this result in a financial burden to support two households, but the family is also split up.

And they continue to live as evacuees, without knowing whether or not it was the right decision and without anyone in the family knowing how long it will go on.

A year has passed since the disaster. All sorts of people have Fukushima on their minds, but conjecture and cogitation won’t help the residents of Fukushima City any time soon. Unless action is taken, it’s difficult to change the outcome. By making public the ugly arguments between my wife and me, I would like to convey the plight of the people of Fukushima City. It has even occurred to me that it may be important to record the fact that there have been a lot of arguments between couples as a result of the accident at the Fukushima No. 1 (Daiichi) power plant.