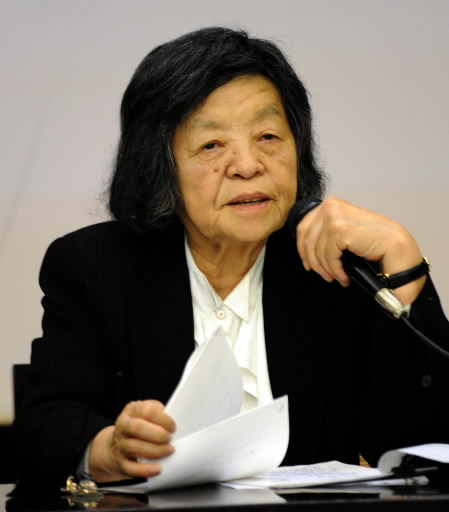 My life up to this point has been very busy. I’m now pondering how I should spend the rest of it.

After retiring as the superintendent of the Iwakuni Board of Education in June 2010, Ms. Isono has been active as a speaker.

Community centers and NPOs frequently ask me to speak. The topics include creating programs in a digital format and using the Internet as a media platform.

On the first Saturday of each month, I speak to a group of women in a seminar sponsored by the Iwakuni Women’s Council. In the session on December 4, which summarized our studies for the year, I talked about the appreciation of the yen and such diplomatic issues as the collision of the Japanese Coast Guard vessel and the Chinese fishing boat near the Senkaku Islands.

I’ve also shared my thoughts on what Japanese businesses should do as they struggle with high costs. If Japan remains complacent and rests on its past success, it won’t be able to stay competitive on the global stage. I concluded this year’s seminars by predicting that next year will be a tougher one for Japan.

The Iwakuni Women’s Council is composed of 40 members who seek to realize a society where men and women are treated equally. Ms. Isono has been speaking there for 30 years.

Of course, I talk about journalism, too. Wars continue to break out, one after another. The global environment is deteriorating. With the world changing at such high speed, journalism has an important role to play. Journalism that isn’t based on ratings or biased views is needed to report from a global perspective and help guide a nation’s direction.

Although it is said that television viewing will shift to the Internet and mobile phones, and the industry will face difficulties, I expect TV will continue to be the visual medium that the public feels closest to. These days, though, there are too many entertainment-oriented shows. This may be enjoyable and profitable, but the media’s commitment must not only be to such shortsighted aspects of its work.

I want younger people to produce the kind of documentary programs to which we devoted ourselves. I want producers to hold strong convictions and value high quality. I want to see more programs that break new ground and show us a unique perspective on the world. These are my highest hopes.