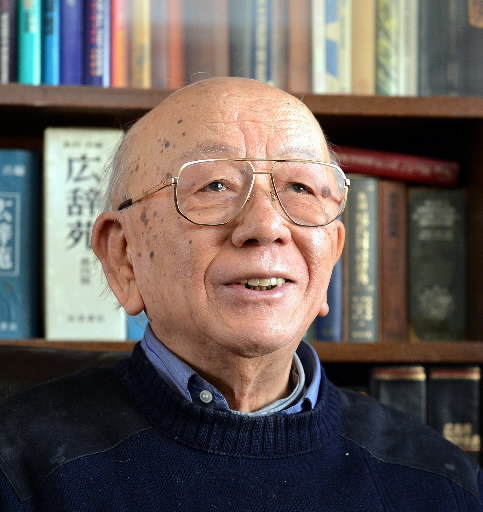 Makoto Kitanishi, 87, professor emeritus at Hiroshima University, chose to live his life to opposition to war and nuclear weapons and has been deeply involved in these movements. He is also a political scientist with extensive knowledge of the behind-the-scenes history of the atomic bombing of Hiroshima. The Chugoku Shimbun asked him about the development of his political thought and his activities over the years.

Suspicious movements are emerging. With the single-seat constituency system, a lot of votes are wasted, and it is the least effective way to reflect the will of the people. The Liberal Democratic Party (LDP) is making a comeback under this system and racing to strengthen the Japan-U.S. military alliance. The LDP openly advocates relaxing the Three Principles on Arms Exports, exercising the right to collective self-defense and revising the Constitution.

Policymakers don’t have a proper overview of Japan’s war of aggression. They haven’t examined the nation’s responsibility for the war. A powerful member of the ruling party has said that the Constitution was “forced on” Japan. But if you look at the process by which it was adopted, after Japan was defeated in the war, the government tried to get by with just making minor revisions to the Meiji Constitution, so in frustration GHQ [the General Headquarters of the Allied Forces] took on the task of drafting a new one.

When it comes to the U.S. military bases in Okinawa or the training flights by the Osprey [tilt-rotor transport aircraft], the politicians who are always advocating Japan’s formulation of its own constitution just do whatever the U.S. says. Of course, North Korea’s nuclear weapons tests pose a threat, but the politicians ignore the fact that Japan is under the U.S. nuclear umbrella.

The fact that the Constitution was given to Japan has had a major influence. There are faults in it, such as the fact that too much power is concentrated in the hands of the prime minister. But it provided the basis for Japan’s postwar democracy. Implementing the articles of the Constitution to the letter can provide the foundation for an ideal society, but in fact a movement running counter to this is gaining strength.

I’ve lived my life in a hit-or-miss fashion, but Japan must never again go to war. I have never wavered in this belief. I’ll be a Marxist until the day I die. The kind of Marxist society I’m talking about is one in which those who are oppressed or vulnerable and those who work hard can be happy.

I started out researching the political party system in England and broadened my studies to include the anti-war and anti-nuclear movements. As for my wartime experience, I’ve been influenced by my guilt over the fact that I escaped the hardships of the war while so many others of my generation died. Looking back, anti-military sentiment has been ingrained in me since I was a boy. I think my resistance to authority and power partly comes from my home environment. Outside our home my father, a scholar of Japanese literature, was a liberal, but at home he ruled the roost.

(This series of articles has been prepared by Masami Nishimoto, Senior Staff Writer.)