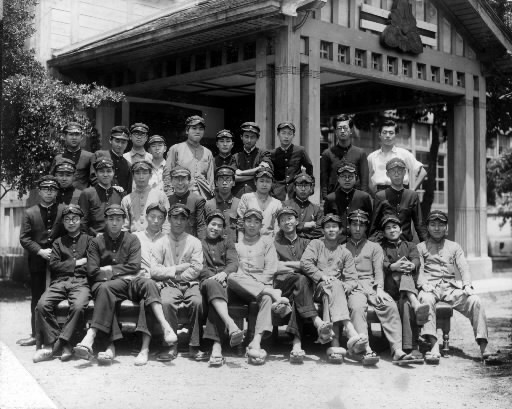 In those days, the course at Kyoto Prefectural University of Medicine lasted seven years: a three-year preparatory course followed by the four-year regular course. Although the fighting in China was dragging on, I didn’t think the war against the United States and Great Britain would last seven years and I felt certain that Japan would lose.

I didn’t have a clear anti-war philosophy. I just didn’t want to go into the army, which I thought was absolutely ridiculous. I told my parents how I felt. My brother had been drafted while a student at Osaka School of Foreign Languages. Losing both of their sons would have been too much for my parents. They understood how I felt.

On August 15, 1945 I had been digging an air raid shelter on the university campus since morning because it was thought that Kyoto might also become a target of the new type of bomb (atomic bomb). Until then there had been no air raid shelters. We were told to gather to hear a broadcast by the emperor at noon. I listened to it in a student break room on a poor-quality radio. “Ah, it’s finally over,” I thought to myself.

A Korean underclassman I was friends with gave a cheer. Several people began beating him, and I stepped in to break it up. I recall going back to the boarding house, tearing down the black-out curtains and falling asleep sprawled out on my back.

During the war I felt sorry for the guys who had been drafted, though I just looked on. But after the war, when I heard that classmates and childhood friends of mind had died in suicide attacks, I felt guilty. Ichizo Hayashi lived next door to us in Fukuoka. His last letter is included in “Listen to the Voices of the Sea” (a collection of writings by Japanese student soldiers who died during World War II, first published in 1949).

Mr. Hayashi was drafted while a student at Kyoto Imperial University and died on Okinawa in April 1945 in a kamikaze mission. He was 23.

He wrote that he might fly over Hakata, where his parents lived, on the way back from Wonsan on the Korean peninsula. I had often played with him since I was in the third grade. After the war, his brother, who was a year younger, just kept staring off into space on a corner in the neighborhood. I put my cleverness to work to become a medical student and avoided going to war. Because I was in Kyoto I didn’t experience air raids either. While I was in Fukuoka on temporary leave from school (in June 1945) I escaped that air raid too because I’d gone to Saga to do some shopping.

Kyuichi Tokuda (who rebuilt the Communist Party) and others were released from prison in October 1945. That’s when I learned that there were people who had risked their lives to resist, and I was very impressed. I decided to oppose any movement toward war, and I did not hesitate to drop out of Kyoto Prefectural University of Medicine.