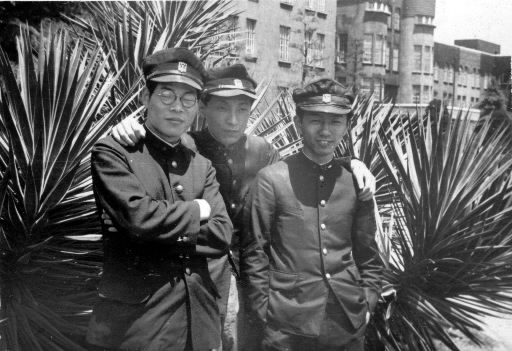 In 1948 Mr. Kitanishi dropped out of Kyoto Prefectural University of Medicine and went back to Fukuoka where he enrolled at Kyushu University.

I started reading Marx after I entered Fukuoka University. I also heard lectures by Itsuro Sakisaka (translator of “Das Kapital” and a professor in the Faculty of Economics). He was a good writer, but his lectures were as hard to understand as “Das Kapital.”

It was the time of the switchover from the Imperial university system to the new system and there was no liberal arts course, so I joined the seminars of Tsugimaro Imanaka and Kanesaburo Gushima (later president of Nagasaki University). Lectures were generally held twice a week and lasted 100 minutes, but Mr. Imanaka said that wasn’t enough for him and held classes three times a week. He never cracked a joke during them, but he was known for his excellent lectures. Although I was no match for him, I often picked arguments with him.

Mr. Imanaka had sought ways to oppose Fascism, and after “Political Science,” which he wrote in 1941, was banned, he left Kyushu University the following year. He returned in 1946.

I formed an international politics club, and in 1949 I joined the Communist Party at the invitation of a friend. I had managed to gain time to avoid going into the military, and I felt that from then on wars had to be prevented not through the intentions or knowledge of individuals but in an organized fashion centered on the Communist Party. Speaking in the extreme, under the occupation headed by the General Headquarters of Allied Forces (GHQ) you had to be prepared to risk your life when you became a member of the Communist Party. When members of the Kyushu University “cell” (branch) of the party gathered, we filled a large lecture hall. There must have been 1,000 of us. I gave rabble-rousing speeches from the balcony of the library.

On May Day I made a placard that said “Go Home Quickly,” a play on “GHQ,” and participated in a demonstration at Kyushu University. I was walking behind employees of the Food Department of the Ministry of Agriculture and Forestry, where I worked part-time, and they threw my placard into the river. You could be arrested for criticizing the Occupation forces.

In 1950, when the Korean War broke out, jet fighters made sorties from Itazuke Air Base (in Fukuoka City). We discussed the fact that if Itazuke were to become unable to operate, fewer Koreans would be killed. I suppose it was partly the easygoing attitude of a student, but I decided to become a labor activist after I graduated.