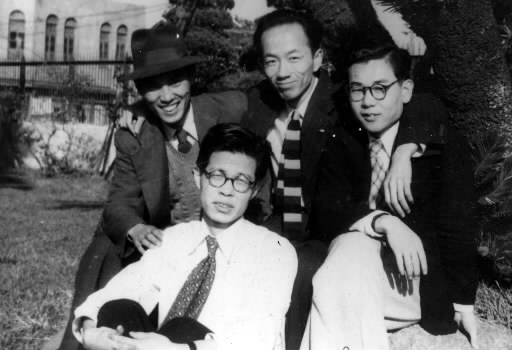 Aiming to be a labor activist…quits his job

After graduating from Kyushu University in 1951, Mr. Kitanishi went to work for Ube Industries, Ltd. (in Ube, Yamaguchi Prefecture).

I wanted to be a labor activist at a manufacturer. I interviewed with a number of companies but couldn’t get hired. I had been involved in the student movement, so I was always eliminated when they checked into my ideology. I had been the vice-captain of the rugby team at Kyushu University. I asked Taijiro Kasai, who was head of the team and a professor in the Faculty of Engineering, if he knew anyone at Ube Industries, and he wrote me a letter of recommendation. That’s how I got hired.

The year I started working at Ube Industries, the rugby team beat the team from the Hiroshima division of the National Railways in the finals to win the Chugoku region tournament for the first time. I was a pretty good fullback, if I do say so myself.

I worked in Management Section No. 1 of the Industrial Division. The “red purge” by GHQ (General Headquarters of the Allied Forces) had taken place the year before, and union activities were at a standstill. Ube Industries was a diversified company involved in business such as nitrogen and cement. It had separate unions for each of its facilities, which Kaoru Ota (later head of the Council of Labor Unions of Japan) headed up.

When Ota and others asked the company to eliminate the differences in wages between its facilities, they were notified that they would be fired. The nitrogen plant staged a strike, but the head office union didn’t support them. I had joined the company in order to be a labor activist, so I felt I had to cooperate.

At night people from management came to the company housing for the nitrogen plant workers in an effort to win them over and break the strike. I joined a picket line to try to prevent them from doing that. That’s when I got started talking with Hideko, who later became my wife. She worked in the section next to ours and lived in the company housing with her mother, who was a cleaning woman, and her father, who was a security guard at the Port of Ube.

According to a history of Ube Industries published in 1984, the ammonium sulfate industry was under heavy pressure to streamline in response to the boom in the economy that resulted from the Korean War. The nitrogen plant union went on strike on February 22, 1952. The strike lasted 53 days, and the union’s demands were ultimately met.

This is another example of the haphazardness of my life, but while I was supporting the strike I decided to quit my job. I don’t drink, but I was a new employee so I was sent out to buy unrefined sake. And I was invited to go to the local red-light district. I felt that someone who intended to be a labor activist shouldn’t be buying women. People thought I was snobbish and figured that because I had graduated from an Imperial university I would come around to management’s side sooner or later. I didn’t get along well with my coworkers.

So in the end I quit Ube Industries after one year and entered graduate school at Kyushu University. I had started going out with Hideko, and she said to me, “You should be a scholar.” Her suggestion also had an impact on me.