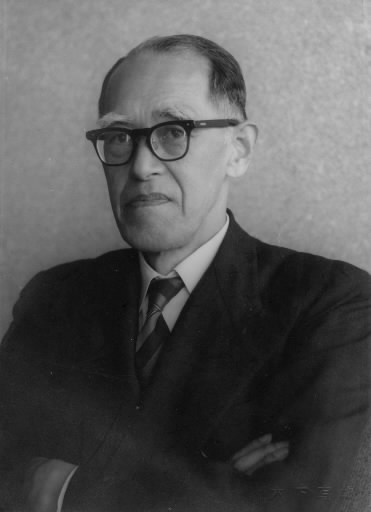 Led into the life of a researcher

In 1952 Mr. Kitanishi entered graduate school at Kyushu University, where he studied under Tsugimaro Imanaka, who was an authority on political science.

I went home during the New Year’s vacation and called on Mr. Imanaka. When I told him I didn’t get along with my coworkers at Ube Industries, he said, “You’re not cut out to be a company worker. If you come here to do research, you can study under me.” I had spent my undergrad years participating in the student movement and playing rugby, so I was a little anxious about it, but I took him up on his offer.

Unlike the current system, the stipend for special research scholars was 10,000 yen, more than the 7,000 yen starting salary of a research assistant. So I decided to be a research scholar, and in May of that year I got married.

For new grad students the classroom was also our office. In those days Mr. Imanaka’s family was in Tokyo, and he lived in a boarding house. So he came to the university very early in the morning. Hiroshi Yamada (later a professor in Hiroshima University’s Faculty of Integrated Arts and Sciences), who was two years ahead of me, was very conscientious and got to school even earlier, but I had trouble getting up in the morning, so I usually sneaked in around 9 o’clock. Nothing was said to me about that, but I was spoken to about the way I did my research into political science.

I went from the history of political thought to the study of political science, but you can also start with the theory of political movements. After Mr. Imanaka found out that I could understand English, I ended up studying England’s political party system. But he didn’t tell me what to read. After one month you had to report to him on what you had done. Depending on what you said, Mr. Imanaka might get up out of his seat during your report. If that happened two or three times it was his way of letting you know that you weren’t cut out to be a research scholar.

He also said researchers should immerse themselves in their studies for three years. But after six months I was named to the board of the university’s teachers’ union. Mr. Imanaka ended up taking phone calls for me from the union’s secretariat in the teachers’ office. “It’s for you again,” he’d say. But he let me keep studying with him. I was his last student – the baby – at Kyushu University, and he spoiled me in some ways.

Mr. Imanaka (1893-1980), who was the great-grandson of a chief retainer of the feudal clan in Hiroshima, was invited to join the Faculty of Politics and Economics at Hiroshima University in 1949 and went to work there in 1953.

My union activities really got going in May 1954, and I became a member of the Central Executive Committee of the Japan Teachers’ Union. Two members of the committee were from universities. I traveled all over organizing unions at universities throughout Japan. The president of Kyushu University, who had graduated from the Faculty of Law, didn’t look kindly on my activities. He thought it was strange that I was serving on the union’s Central Executive Committee while still a graduate student. He must have mentioned this to Mr. Imanaka, who contacted me asking if I’d like to come to Hiroshima University. He got me a post as a research assistant.