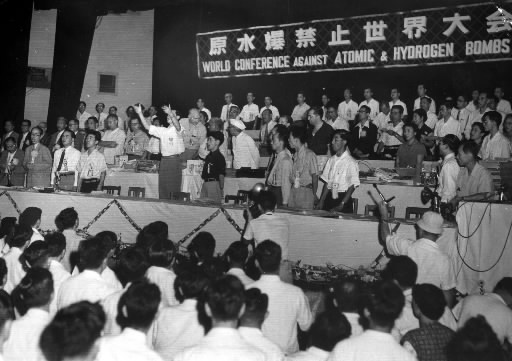 The movement to ban atomic and hydrogen bombs began as what would be referred to today as a “grass roots movement.” With the test of a hydrogen bomb on Bikini Atoll on March 1, 1954, a petition drive was started at the Suginami Community Center in Tokyo. It spread throughout the country, and eventually 32 million signatures were collected. But the petition made no reference to support for A-bomb victims. So the idea arose in Hiroshima to make the movements to ban the bomb and to support victims of the atomic bombings part of the same movement and to hold a world conference.

Tsugimaro Imanaka, president of the Society of Academics, Kiyoshi Sakuma, its secretary-general, and other members were very involved in the preparations for the conference, which was the first international conference held in Hiroshima. But I had not even experienced an air raid much less an atomic bombing, so I decided to stick to leg work for the conference.

The World Conference against Atomic & Hydrogen Bombs opened on August 6, 1955 at the municipal auditorium, which was located in Peace Memorial Park. Representatives of 14 countries attended. About 30,000 people, including local residents, also held a “Welcome and Prayer Convention.”

In order to keep a record of the conference, we set up an “information-sharing desk.” Hiroshi Yamada was actively involved in that. Meanwhile we received a complaint that there was no simultaneous interpreter for French, as was usual for international conferences. I looked all over but couldn’t find one. The group meetings at separate locations were very exciting. On the last day of the conference, we all sang “Never Again the A-Bomb” under the direction of Koji Kinoshita (a teacher at Hibiya High School in Tokyo), who had written the music. I sang with Mitsuru Ito, Naomi Shono and others on the tiered platform. It was very moving.

Until then most of the people involved in the peace movement had been members of the Communist Party who were active in the struggle against imperialism. This was true of me as well. I had participated in the Stockholm Appeal (a 1950 petition drive calling for an absolute ban on nuclear weapons) while I was at Kyushu University. The ban-the-bomb movement, which declared that it was based on humanism, was more popular. Neighborhood associations raised funds for the world conference. The movement was widespread, but I wondered how popular it would become.

On August 8 the conference adopted a declaration that also called for a movement in support of relief measures for the victims of atomic and hydrogen bombs. The next day the Japan Council against Atomic and Hydrogen Bombs was established.

When the Hiroshima Council against Atomic and Hydrogen Bombs was formed, Mr. Sakuma, Mr. Shono and Ichiro Moritaki joined as members of the board from the Society of Academics, although Mr. Moritaki seldom attended meetings. Most of the members were atomic bomb survivors. When the sailing was smooth I wasn’t asked to serve in a leadership role, but when things hit a snag I would be called in. This was true at the university as well. In 1962, when the conflict between the Socialist and Communist parties over the ban-the-bomb movement became apparent, I was asked to serve under Mr. Ito as vice secretary-general of the Hiroshima Council.