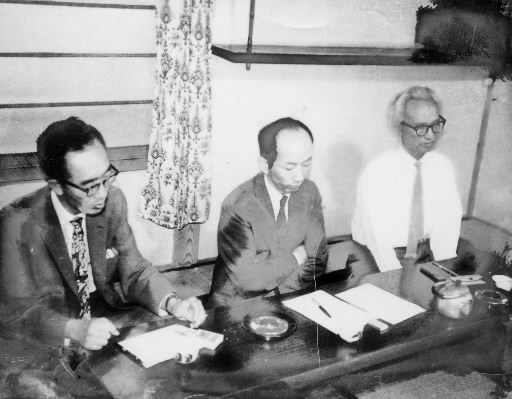 The turmoil in the ban-the-bomb movement, which had begun as a grass-roots effort, grew worse as a result of the struggle between the leaders of the Socialist and Communist parties over whether or not to oppose nuclear tests by all nations. This issue was difficult for those not involved to understand.

The stance of the Socialist Party and the General Council of Trade Unions was to oppose nuclear tests by any country, whereas the Communist Party regarded nuclear tests by socialist countries as a defensive measure. This conflict also represented a difference in their political agendas in terms of presenting a united front. The Socialist Party had consistently been passive with regard to presenting a united front with the Communist Party. Then the Socialist Party faction, which represented a majority of the leadership of the Japan Council against Atomic and Hydrogen Bombs (Japan Gensuikyo), issued a declaration on February 21, 1963 stating that opposition to nuclear tests by any country would be made a principle of the organization, and through a vote of the majority they resolved that anyone opposed would no longer be allowed to participate in the organization.

The ban-the-bomb movement had grown as a people’s movement, so I felt it was fine to have various different ideas. But I thought that making opposition to tests by any country a principle was an “exclusion theory.” A conflict arose in the Hiroshima Council against Atomic and Hydrogen Bombs (Hiroshima Gensuikyo) with those who felt that it was only natural for members of the Communist faction to be excluded. I accepted the post of vice secretary-general of the Hiroshima Gensuikyo when they switched from an executive director system to a representative committee system.

(In July 1962) six people, including Ichiro Moritaki, Kiyoshi Sakuma, Manso Hamamoto and Hiroshima Mayor Shinso Hamai, were elected members of the representative committee. Mitsuru Ito (professor in Hiroshima University’s Faculty of Politics and Economics) was the secretary-general. I wondered why I was selected just as the conflict between the Socialist and Communist parties was becoming apparent. It must have been on Mr. Sakuma’s recommendation. He wasn’t a member of the Communist Party, but he was a sympathizer.

At the meeting Mr. Hamamoto (then chair of the prefectural labor union council) said, “I am here representing 120,000 union members.” I only had my wife and son, and I wasn’t even sure whose side they were on. But I couldn’t allow him to intimidate me, and we got into a big argument.

Usually the Japan Gensuikyo treated big organizations and individuals the same, and their finances came almost entirely from the fees paid to participate in the World Conference against Atomic & Hydrogen Bombs. It was a unique organization with a structure unlike that of a labor union.

At the 9th World Conference in 1963 the leaders of the Socialist and Communist factions were locked in dispute, and there were repeated changes regarding who would run the conference right up until the opening session on August 5.

I told Mr. Sakuma it was clear there would be a split if nothing was done and urged him to issue a declaration to keep that from happening. I said, “Destroying unity will violate the will of the people of Japan who have supported the ban-the-bomb movement.” I drafted the declaration of the Society of Academics (issued by 13 members on August 3). Mr. Moritaki and Mr. Ito weren’t there at the time, but they approved.