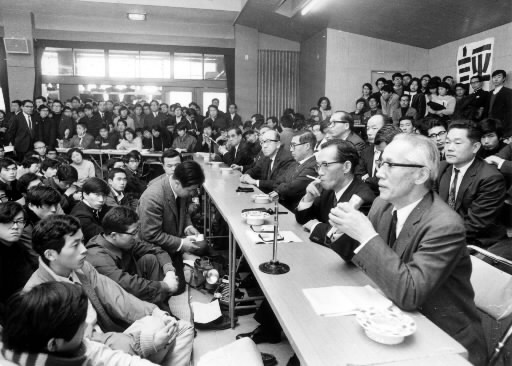 In the late 1960s the All-Campus Joint Struggle League’s movement spread, and in January 1969 a branch of the league was established at Hiroshima University. As a member of the Student Issues Committee, Mr. Kitanishi was involved in dealing with the protesters.

With the rapid growth of Japan’s economy, society overall became more controlled, and there was an undercurrent of opposition to this. But in the case of the unrest at Hiroshima University, certain factions took control and gained the support of the so-called “apolitical” students. From there things escalated rapidly.

Hiroshima University had taken the position that it would not recognize students’ right to govern themselves. In the eight-point demand issued by the university’s All-Campus Joint Struggle League, the students demanded that a consumer cooperative be set up in place of the cooperative society run by the university and that students be allowed to run the student center themselves. They said that other universities had already done this.

But the executive council (consisting of the university president and department chairs) dragged their feet and couldn’t decide on anything. I was a member of the Student Issues Committee, and I tried to persuade the administration that they should go along with the students’ demands. But the dean of students, who had come from the Ministry of Education, stubbornly insisted that he would not give in to their demands.

The Student Issues Committee was formed while Tomojiro Kawamura was president of the university. The spring 1968 graduation and entrance ceremonies were held separately, and two debaters – or rather two people who were eloquent speakers – were chosen from each department, and a committee that had executive authority was formed.

I had just become a professor in the Faculty of Politics and Economics, and the other person from our department was an economics professor. He was named chairman of the committee. He thought I was a smart-aleck, so every time I had come up for promotion he had voted against me. But he didn’t even know the difference between the assertions of the Democratic Youth League and the Revolutionary Communist League. He begged me to serve on the committee, saying he would really like to have my cooperation, so I agreed to serve. I had students from every faction in my classes, and I was the adviser to the Society for the Study of Socialism. If a club didn’t have an adviser it wouldn’t be recognized as an official club. This is another way in which the university’s system was really outdated.

So, I didn’t feel antagonistic toward students in various factions, but I felt the Joint Struggle League’s movement was isolated. With the cooperation of workers, the student protest in France in May 1968 developed into a social movement. They said it wasn’t enough just to protest on campuses.

In the negotiations with the students, when the administration started to speak they would turn off the microphone and wouldn’t allow us to speak. In short, it was just a one-sided kangaroo court. Mr. Kawamura couldn’t stand it, and he resigned (on February 18, 1969). Lockouts began with the Department of General Studies (on February 24), and the situation escalated to the point that the students demanded the dissolution of the university. I suggested Soichi Iijima (a professor in the Faculty of Medicine) as the only person who could resolve the situation and get us through this crisis. It was decided that I would go talk to him and try to persuade him to accept.