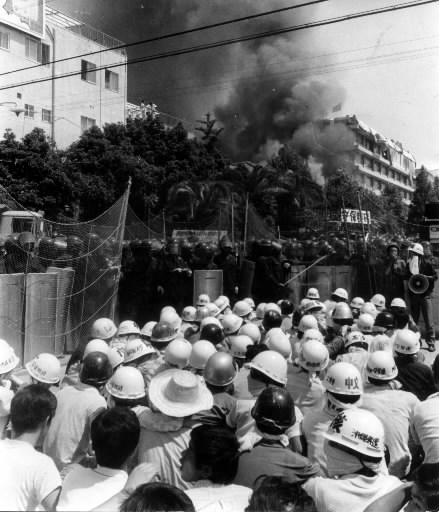 Broken up by police: Left with a bad feeling

In 1969 the lockouts at Hiroshima University spread throughout departments at the campuses in Higashi Senda-machi in Naka Ward and Kasumi-cho in Minami Ward.

I had my eye on Soichi Iijima (professor in the Faculty of Medicine) as a candidate for university president. He was vice chair of the Student Issues Committee, a man of insight and an excellent speaker. In the negotiations, I wanted to get ordinary students to understand how unreasonable the demands of the faction leading the university’s All-Campus Joint Struggle League Drive were and drive a wedge between the two groups.

Mr. Iijima had come from Nagoya University not long before. He was in his 40s and not well known at the university. When I visited his pathology lab, he and four or five others were there. They resisted my request, saying there was no need for Mr. Iijima to be a casualty at a time like that when research was important.

I told them the negotiations would continue for a while, but there would be no choice but to bring in the riot police to end the lockouts and that if he resigned to assume responsibility he wouldn’t be out of a job for long. When I was alone with Mr. Iijima I got the feeling he would accept the job. I fixed it so he was one of the five candidates for president. Only research assistants and above could vote in the election, and Mr. Iijima won by a wide margin. (He became president on May 7.)

The lockouts began with the Faculty of General Education (on February 24). When the negotiations in each department were broken off, the reasons were written on a standing signboard, and a lockout began. But in the Faculty of Politics and Economics They tried to avoid that. I turned the students away, saying they couldn’t start a lockout without writing some good reasons for it, and then spent the night by myself in the duty room. So they wrote plausible reasons on the standing signboard and (on April 22) a lockout began.

The All-Campus Joint Struggle League Drive spread to 68 of the 75 national universities. The Law for Temporary Measures concerning University Management, which was railroaded through the legislature by the government and the Liberal Democratic Party, was used to halt the educational and research functions at universities that could not get the situation under control themselves. It was applied to Hiroshima University, and on August 17 approximately 1,200 members of the prefectural riot police were sent to the campus to end the lockouts.

A group consisting of my students and others who called themselves “Politics of Liberation” was holed up in the building that housed the Faculty of Politics and Economics. The day before the riot police were to come, I warned them about it, and they all left. The next day they sat in the street in Higashi Senda-machi and watched the police take over the campus.

I felt extremely reluctant to bring in the riot police. I felt wielding power to crack down on the protests should not be allowed. I was the guarantor for students who were arrested and appeared as a defense witness at their trials. In the 1990s I served as the Hiroshima representative for an anti-war petition drive students were involved in. People asked me why I was lending them my support. It was because I had guilt feelings – or perhaps I should say I was left with a bad feeling about what had happened in the past.