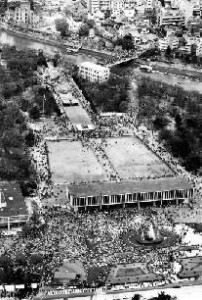 I went to England mainly to do research on the Labour Party, but I also wanted to explore ideas and strategies for bringing about nuclear abolition. I sometimes visited the offices of the London-based Campaign for Nuclear Disarmament (CND).

CND was founded in 1958 by philosopher Bertrand Russell, Anglican priests, opponents of the death penalty, among others, and it is still going. It tried to promote nuclear abolition by advocating the total elimination of Britain’s nuclear weapons and the overturning of the idea behind the arms race. Although there were internal conflicts, CND attracted support as a citizens’ movement.

I joined one of their demonstrations, and among the CND ranks were the red flag of the Communist Party, placards by Quakers and portraits of Mao Tse-tung. I was reminded of the importance of acting in concert with others who shared the same goal.

With the split in the ban-the-bomb movement, I became president of the Communist-affiliated Hiroshima Council against Atomic and Hydrogen Bombs (newly inaugurated in 1965). But the members of the Japan Congress against A- and H-bombs, which was affiliated with the Socialist Party and the General Council of Trade Unions (formed the same year), were seen as “separatists.” I didn’t see them as separatists, which made things difficult. Things fell apart, and in 1965 I left the Communist Party.

For that reason I was genuinely moved when the two groups reached an agreement on May 19, 1977. After the first joint world conference in 14 years, I served as co-chair of the local executive committee with Naomi Shono (professor at Hiroshima Jogakuin University). Mr. Shono was not affiliated with a political party. The committee didn’t make any objection to my serving as co-chair, even though I was a former member of the Communist Party. I wrote about the need for unity in essays and advocated it in speeches, but I had not engaged in anti-party activities, you know.

In 1981 I reactivated the Society of Academics and served as its president. The following year I helped with a drive to collect 30 million signatures on anti-nuclear petitions and submit them to the second United Nations Special Session on Disarmament. I accepted the post of chairman of the “Hiroshima Rally for Peace” that the General Council of Trade Unions promoted along with citizens’ groups. It just seemed the natural thing to do. With the help of my wife and friends, we transcribed all the speeches delivered at the “Hiroshima Rally for Peace” and published a collection of records at the event.

On March 21, 1982, approximately 200,000 people gathered at six locations in Hiroshima. They adopted this motto: “Let us overcome differences in philosophy and nationality and join forces to achieve our goal of eliminating nuclear weapons.” This event remains the largest anti-nuclear gathering ever held in Hiroshima.