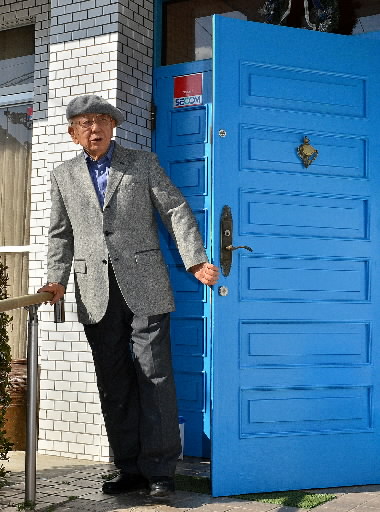 Holding out hope for individuals’ resolve and energy

On his New Year’s cards this year, Mr. Kitanishi said, “I want to become more proficient at using Facebook and continue to participate in the anti-war and anti-nuclear struggles.” He also called for a strong stand against revisions of the Constitution.

I don’t read many essays by political scientists these days. Few people espouse their vision for the future. They’re all caught up in the present. I think they’re losing the ability to be critical.

I specialized in the study of the British political party system. In the latter half of the 19th Century, the single-seat constituency system was introduced by the Conservative and Liberal parties in order to prevent the emerging Labour Party from making inroads into Parliament. Elections have two contradictory functions: to reflect the will of the people and to consolidate it, but the single-seat constituency system reflects the people’s will least of all. So on the European continent, the proportional-representation system has traditionally been used, and in that sense the United Kingdom is unique. But British political parties are integrated into people’s everyday lives, and the Labour Party has a solid base. It’s very unlikely to have a bad situation like the one that occurred here in last December’s general election in which the Liberal Democratic Party got 80 percent of the seats in the Diet despite winning only 43 percent of the vote in the single-seat districts.

Japan’s labor unions are affiliated with particular companies, so they’ve become company-controlled and too weak. Even with differences between the presidential and parliamentary systems, in Europe the business community, bureaucrats and labor unions essentially lead the politics. On the whole, policies have become more right-leaning, but the political parties that are backed by the unions still play a role in politics. But Japan has gotten into a situation in which the unions don’t participate in politics.

There is a movement afoot to strengthen the military alliance between Japan and the U.S. and then change Article 9 of the Constitution, so this is no time for the news media and others to be hailing Abenomics. The Self-Defense Forces have never killed or been killed in other countries. We still don’t have a proper overview of the war leading up to the atomic bombings, but we can be proud of the progress we have made that embodies the spirit of Article 9.

Meanwhile, since the accident at the Fukushima No. 1 (Daiichi) nuclear power plant, there is growing opposition to nuclear power. People are gathering of their own will and demonstrating, using the Internet and surrounding the Diet building. This is a new trend and completely different from the mobilization-style demonstrations of the past. We need to take a good look at the dangers of “nuclear security,” which endorses being under the nuclear umbrella of the U.S., and broaden the anti-nuclear movement, which seeks to eliminate it. I hope to see individuals’ resolve and action interconnected, and I believe that is where the beginnings of a better future lie.

(This is the final installment in this series, which was prepared by Masami Nishimoto, Senior Staff Writer.)