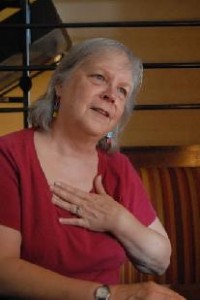 Inspired by those who have dedicated their lives to peace: Continuing to raise issues of nuclear weapons and peace

More than 25 years ago the Hiroshima International Cultural Foundation launched the Hibakusha Travel Grant for American Journalists to invite American journalists to Hiroshima and Nagasaki so that they could convey the reality of the atomic bombing in the United States, a nuclear superpower. Since filing reports on their experiences via the local news media, some reporters have continued their efforts to bring about peace at the front lines of journalism and education. The Chugoku Shimbun talked to three former participants in the program, commonly referred to as the Akiba Project, about their experiences. The following are edited excerpts from those interviews.

What does your project mean to you?
I think they were some of the most meaningful experiences of my life. For me, meeting hibakusha was very shocking but also very compelling. Once I met the hibakusha, it became a personal part of my life that I needed to continue to work on, and it affected my whole life because I felt a responsibility to the hibakusha. For 30 years, I have continued writing about hibakusha, and I did some radio stories and wrote some newspaper articles. Then I wrote a book.

So many hibakusha have been dedicating their lives to peace, and so I saw that it was really possible to do that. Because in this country, we go to school and we go have a profession, have babies and we stop doing anything political usually. But these are people who carry their experiences throughout their whole lives and have dedicated their lives to something in a way that most people in this country don't do. I think that meeting some of the hibakusha helped me realize that was something I could do, just like many of the hibakusha have been working as storytellers in schools with children. I feel like I have been doing some of that too. I consider some of the hibakusha my good friends, and I am very honored to be their friend.

How has Americans’ perception of Hiroshima changed?
In the 1980s the feelings about World War II were still fairly strong. People said that the Japanese deserved the atomic bomb. But over the years, now I find that I have a much more positive response. Things have changed a lot, and I am much more hopeful now than I was 30 years ago. When I say I'm working on Hiroshima issues and writing a book about Hiroshima, they say, "Oh, tell me about it." Before, people just wouldn't understand.

Do you think your peace activities have influenced or changed American society?
It's hard to say whether one person can make a change, because change is usually the result of many, many people. But the work I was involved in doing – both understanding what nuclear weapons were and what they do – I think has made a difference because we were able to basically force President Reagan to stop the nuclear arms race with Russia. And that was a very important time. And I wasn't the only one. There were millions of people out in this country protesting in the ’80s in New York City and Washington. I was one of them, and I think that made a difference.

Now, whenever something happens in Washington, there are people who understand what is going on and can report about it. But before, this was all so secret that reporters had nothing to report. In the ’50s, all those nuclear tests that the U.S. carried out were all secret. Nobody knew about them. Nobody knew about the effects of radiation, even in this country, on people from the testing. And so I think that eliminating secrecy was one of the most important things we have done.

Was anyone close to you changed?
My son Kevin went to Hiroshima when he was in high school. I took him when he was 16. It made a huge impression on him. So when he came back, he put on a big exhibit at his school about nuclear weapons and about Hiroshima. Now he's a journalist for New York magazine.

Since 9/11 how has the U.S. changed and influenced you?
I think that 9/11 changed America very deeply. Americans have always felt that we're invincible and we're very powerful, nobody can hurt us. But now they realize, yes, people can hurt us and the U.S. can be hurt very badly, just like everyone else in the world. And people are having a hard time thinking about that, because in the U.S. it's always that we are number one. And now the U.S. is not number one, it is one among many. All the military policy in the country is built on "we're number one" when they should be thinking more about how can we cooperate, how can we find solutions to problems that are not war, how can we get rid of all these weapons of mass destruction. I think people are starting to think about those questions now, but it's a very slow process.

Did you find any difference between Hiroshima the first time and the latest?
The [Peace Memorial] Museum has become much more professional, much more powerful, much more effective in getting the word out to people in many different ways using different media, using TV, using the Internet and all of those things that they never had before. So I think its message can be much broader and appeal to more people now. Before, it was just a little tiny voice. Now it's a much more sophisticated voice for peace. So I think that's a big difference between Hiroshima 30 years ago and Hiroshima now.

An important change over time – that I hope will continue – is to make sure that the next generation of people from Hiroshima will be as effective and as successful as the hibakusha themselves. That's a big change now that the hibakusha are growing older and the younger children and grandchildren are taking more responsibility for that, and I think that's the big challenge for Hiroshima. So that is another way that Hiroshima can help the rest of the world: by providing lots of ways that young people can learn and talk about this with their friends and with other people.

How are you going to continue your work with peace in the future?
Most of my work will be in writing, but at the same time I have been going to classrooms at colleges and high schools and talking to both students and teachers. One of the things that has been most interesting is talking to teachers about how we teach about Hiroshima, because they don't know, and American history books don't help because they don't really talk about it. A lot of social studies teachers want to talk about issues, but they don't have any knowledge or any resources to do it. My new book is called "Teaching Hiroshima." It’s about how we can teach the next generation of people about Hiroshima. I'm not sure when it will be published. Not this year, maybe next year. It will be a very small publication. I may even publish it on the Internet. That's a new way of publishing. I am exploring that now.

Diana Roose
Born in Ohio in 1948. Participated in the Akiba Project in 1980 when she was a radio producer. Her 10-part radio series entitled “Shadows of the Nuclear Age” was broadcast nationwide. Produced a play on the atomic bombing, “Ghosts of Hiroshima,” in the U.S. in 1981.

Hibakusha Travel Grant for American Journalists (Akiba Project)
The Hibakusha Travel Grant for American Journalists was launched by the Hiroshima International Cultural Foundation in 1979 in an effort to convey to Americans the reality of the atomic bombings as well as the desire of Hiroshima and Nagasaki to abolish nuclear weapons and to bring about a peaceful world. A total of 34 reporters from local newspapers and other news media came to Hiroshima and Nagasaki through 1988. The project is commonly referred to as the Akiba Project after Tadatoshi Akiba, former mayor of Hiroshima, who was then an associate professor at Tufts University and who proposed the program.