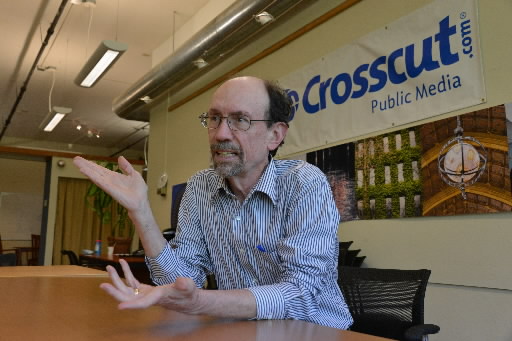 What was your experience 30 years ago covering Hiroshima and Nagasaki as a journalist?
I had read quite a bit in preparation for the Akiba project, but still to be in Hiroshima and Nagasaki was a powerful experience. And certainly before that I was concerned about nuclear weapons, but I became very much more concerned about it. After doing the interviewing and meeting hibakusha, emotionally I found it very impressive – the dedication to peace of the survivors.

Didn’t you feel hate in Hiroshima?
I’ve done repeated interviews with several people, and some of them talked about how angry they were for a number of years. But at least among the people who talk about it, they had let go of that many years ago. And that sometimes seems a contrast to the American mentality of harking back to history. That sort of forgiveness and willingness to work on solutions was probably the most impressive thing.

What did you report then?
When I came back I did a week-long series for my newspaper at the time. We did 19 articles over seven days. We just called it “The Hibakusha,” because what was so striking was the strength of character, the survival, the rebuilding and the memory of what was lost that people held. And all that people had done in the years since.

What was the response?
There was some very good response and there was some very angry response. It made some conservative people very angry and there were a lot of letters to the editor, but there were also letters to the editor in favor of it too. Some of them basically said we shouldn’t waste time talking about what happened to the Japanese, they started the war and we should have been writing about the survivors of Pearl Harbor and what happened to them.

What was the most unforgettable incident?
In some ways, I’ve kept at writing about it and researching about the bombings. The entire experience of the Akiba project has kept me working on it at different times over 27 years. Probably the single most memorable thing that really made sure that I kept working on it was we were in Nagasaki on the Akiba Project and we were doing an interview at a nursing home in the hills above Nagasaki. We were interviewing a woman there who was much younger. She was in her 40s at the time I think. She had become an orphan at the bombing. I think she was 5 or 6 when the bombing occurred. Her mother was killed that day, and her father died of radiation poisoning. I think it was November of ’45. It was just like this story that was overwhelming. Both the interpreter and I were literally crying listening to the story, which I've never done as a reporter in my life. It always convinced me that there was more to do about Japan, about the bombings. When my wife and I went to Nagasaki for the August 9th events in 2009, I was able to find her. She was very weak at the time, but it was still a good interview. She had become fairly active over the years in talking to students.

I heard you have established your own blog on Hiroshima.
Yes, in 2009 I launched a personal blog for nuclear issues called Hiroshimastories.com.

What is the driving force that keeps you writing?
Well, I think in a lot of ways, it's the cause of peace and non-proliferation that people have advocated for in Hiroshima and it's just the memories of people that I've met and what amazing people they are. I know a lot of people who have written about Hiroshima have felt like they had to race to finish something before people died. I've sort of felt that the legacy [of the hibakusha] is going to be important to carry on even after, for people to keep writing about them, whether they're still alive or not. I've been feeling that too, that there's less time. That I need to try to write faster. That I must.

Tell me about Crosscut.com.
We’re a small online news site. There are about five people full time and then another five or 10 people who work regularly for us. And then there are probably about 100 part-time occasional writers. We cover the Pacific Northwest, Seattle and Washington State, and culture to some degree and a little bit about sports. We have about 180,000 unique viewers each month. It’s about 5 years old.

Of course, I've always been impressed by the Chugoku Shimbun. It's amazing what the family has done and the whole company has done for the cause of peace. U.S. newspapers would not have that same dedication to the same cause for 65 years, 70 years almost now.

Compared with 30 years ago, what has become easier or harder to carry out peace activities in the U.S.?
I think people are more open now to criticism of U.S. foreign policy generally. Thirty years ago it would have been impossible to suggest in most media that our policies were imperialistic. People may get mad but they're willing to talk about it, so that's good. I think the World Trade Center and the 2001 bombings certainly made it difficult for a lot of media to do anything but reflect government policies, but I think that has gone away. I don't think that is a problem any more, and maybe in reaction people are looking to the media to question policies.

I think it's difficult with the economy to get readers' attention to peace issues now more than it was in the past. I think the fact that the Iraq war started despite massive protests, you know, has been a problem for peace activities here that the government managed to go ahead despite the fact that it was clear a large number of people opposed it here and around the world, so that's probably created some sort of discouragement.

North Korea is proceeding with its nuclear development. What do you think about it?
Even now, if I’m thinking about world affairs, the Hiroshima experience very much influences how I think about it. With North Korea, the most recent threats, I find myself thinking, well, they don’t dare do anything and if they do they will be destroyed. And it took me over a couple days to think about – that’s not what the people in Hiroshima would say. It would be more, we must find a way to live together and not rely on the nuclear umbrella or something like that.

How can we bring about a reduction in nuclear arms?
I think what we’re seeing with North Korea is very much a result of the U.S. and to some degree the other nuclear powers being resistant to really giving up their arms and saying we need non-proliferation for India and Pakistan and Iran, and someday we might give up some of our arms. I’m afraid we are reaping what we sowed. We’ve created this situation with North Korea to a large degree by our own resistance to really negotiating seriously about non-proliferation.

Do you think Japan should exercise more leadership?
The government over the years has changed a lot in its treatment of hibakusha, but I think in substantive ways it's really stepped up on that issue. But on leadership on non-proliferation, it sort of just comes right up to the edge and says a few nice things but doesn't want to be the leader and doesn't want to use all its moral and economic power. [With regard to the Nuclear Non-proliferation Treaty], if the Japanese government doesn't take leadership then I think the hibakushas’ voice has less power than it would.

Inevitably, it’s sad that some of the great hibakusha leaders are dying. I can’t avoid a little bit of worry about how much influence Hiroshima and Nagasaki will have in the future.

Joseph Copeland
Born in Ohio in 1948. Participated in the Akiba Project in 1986. After working as an editorial writer and columnist for the Seattle Post-Intelligencer, became an editor and writer for Crosscut.com, an on-line news site in 2010.