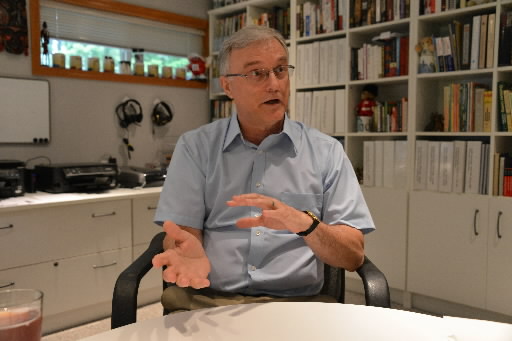 What does the Akiba Project mean to you?
The meaning of it changed for me. As a reporter, initially going to Hiroshima was an opportunity to explain to the readers of the Spokesman-Review newspaper that I worked for what it was like. The Hanford Nuclear Reservation here in Hanford, Washington is where the plutonium for the Nagasaki bomb was extracted. This continued to be the production site for plutonium for U.S. nuclear weapons through the 1970s and 1980s, so now this is one of the most contaminated radioactive sites in the world. As a reporter, the experiences of the hibakusha were a very important part of the story of connecting with people who were exposed to radioactivity here in this area. So that was one of the reasons that I applied for the Akiba Project. My expectation as a reporter was to go and report my experiences, but then it really did affect me.

What about after that?
Probably three years after that, I quit being a reporter and moved into a job in education because I didn’t want to report about policy anymore; I wanted to affect policy. I was in a role as an administrator of an agency that worked with schools all over this part of the state. Later I came to Olympia as the assistant executive director of a state agency here in Olympia working directly with the state and federal government on education policy. Peace education was always one of the things I was interested in and working on.

Tell me about your research into peace education.
I studied the curriculum in schools in Hiroshima, the [Peace Memorial] Museum, the Nagasaki [Atomic Bomb] Museum, an elementary school in Nagasaki, the lessons that they taught. You look at the grade level and you can see teaching pacifism, the elements of being peaceful. This includes teaching the Constitution. You can see that from 4th grade through the 7th grade. This is when most of the peace education is taught. I think the most impactful lessons are in kindergarten.

How do peace education in Japan and the U.S. differ?
Peace through strength is taught in the United States. That's military. So, in order to have peace, we have to have a strong military. I was surprised, frankly, that that was not taught at all in Japan, but then not surprised because that's in the Constitution. Because of the Constitution, pacifism is taught in Japan. When you look at the differences, particularly with the Constitution of Japan and what it is, these two make perfect sense.

What is important in peace education?
There are levels. Even in Hiroshima and Nagasaki, the stories of the hibakusha and the atomic bombings really aren't introduced until 6th grade, until students are 11 or 12 years old, when they're able to accept that. So, when you look at teacher education, you look at the age-appropriate elements, and that's kind of like the awareness – the understanding – of how to move forward from that. When you get into junior high school and high school, especially when students are doing project-based learning, that's when they have the ability to make connections, and I think the Hiroshima [Peace Memorial] Museum and the Nagasaki [Atomic Bomb] Museum have done incredible things with their websites now and students being able to do, from anywhere in the world, to do projects looking at artifacts and accessing the stories of the hibakusha that were never before available and integrate those into their lessons. So that's an important part.

Will that change the general public’s view of World War II?
No, I think it’s a generation. Many of that generation – my wife's dad was a World War II veteran. He was in the Army Air Corps as a mechanic and was in India then China flying planes during the war. He was there fighting the Japanese, so his perspective was very different from my perspective. And I respect that because of his experiences. I think what happened in the 1940s changed the world, but again like the cenotaph: “Let all the souls here rest in peace, for we shall not repeat the evil.” How do we make sure we don't repeat the error? That's my perspective on that.

What’s changed since the 9/11 terrorist attacks?
From conflicts between nations it changed to conflicts between religions and philosophies, and the U.S. could not deal with that. A good example is the recent bombing at the Boston Marathon. There’s no longer middle ground. The liberals and conservatives are polarized, and prejudice is rampant.

The joint statement issued by the Second Preparatory Committee for the 2015 Review Conference of Nuclear Non-proliferation Treaty in April advocated no use of nuclear weapons. Japan did not agree to the statement. What do you think about that?
The Japanese representatives said it was in conflict with policy. But what about your Constitution? Japan’s Constitution renounces war, so how can they go against that? Hiroshima is the only city in the world that can take the lead and say, “This is a mistake.” Hiroshima should point out their errors to politicians directly.

Dick Moody
Born in Washington State in 1951. Participated in the Akiba Project in 1984 while working as a reporter on the Spokesman-Review newspaper in Spokane, Washington. After returning to the U.S. he completed his doctorate in education studying Peace Education in Selected Schools of Hiroshima and Nagasaki, and has since worked with schools throughout the United States. He has most recently worked for the Northwest Evaluation Association, a non-profit educational assessment organization, since 2011.