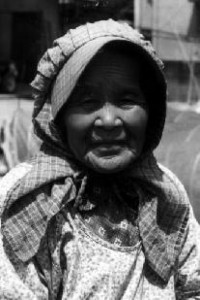 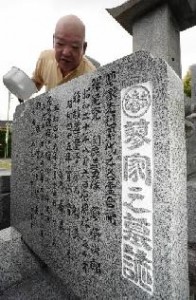 Part 1: Since that fateful day
Article 2: Learning from his mother’s life

Working day and night to raise her children: Feeling comfort only at husband’s grave

In a cemetery in the Kawauchi area, part of Asaminami Ward, Hideaki Tade, 70, closed his eyes in front of his mother’s grave and said softly, “You were so small, but you worked so hard.” His mother Kinuyo died seven years ago at the age of 99.

Kinuyo’s life changed completely the day she lost her husband Eijiro, then 49, to the atomic bombing. That morning, Eijiro, a member of the Kawauchi Volunteer Fighting Corps, was in the Nakajima-shinmachi district (now part of Nakajima-cho in Naka Ward), near the hypocenter, helping to dismantle buildings to create a fire lane. After his death, her days were heavy with hardship.

At the time, Kinuyo’s eldest son, Seiji, was 16 and a student at the former Itozaki Railway School. As the school was located in the city of Mihara, he was living away from home. On August 7, the day after the bombing, Kinuyo told her second son, Teruo, 7, to stay home then ventured into downtown Hiroshima with her third son Hideaki, just 2, on her back.

Hideaki recalled: “I heard that my mother carried me on her back, soothing me when I got fussy, and searched for my father in a river filled with bodies.” She looked for him for three days, but could find no trace of his whereabouts.

Hideaki’s mother was a very hard worker. She toiled in the fields from morning to night to provide for her three sons. She grew radishes in winter and burdock root in summer.

Prior to entering elementary school, Hideaki was cared for at a temple while his mother was working. His mother was always the last one to pick him up. They would arrive home after dark.

When Hideaki entered school, he would run right home after school on rainy days, thinking she would be there. But she was always out in the fields.

One morning, on a day he had to pay the fee for school lunches, Hideaki found that his mother had no money for him and he threw a tearful tantrum. Kinuyo then went out and returned with the money several hours later, and told him to go to school. “I guess she borrowed the money from someone because she didn’t want me feeling miserable about it,” he said.

At night Kinuyo would make screens, from reeds, which were used as sunshades. “Don’t cause any trouble to other people,” his mother always told him. Hideaki explained: “She might have thought that I would misbehave if I was hungry, so she did her best to feed me even though we didn’t have enough food.” As a boy, such simple foods as fried wheat-flour dough were a treat.

Hideaki’s mother spent no time on recreation. But she visited her husband’s grave behind their house every day. Offering seasonal wildflowers, she would put her hands together and fervently pray. “The grave didn’t hold my father’s remains, but I suppose it was the only place she felt some comfort,” he said. “I guess she managed to go on each day by talking to Dad.”

Though Kinuyo said her son could continue his education, even if she had to take out a loan, Hideaki wanted to help support the family. After completing junior high school, he began working at a foundry. It made her happy when he came home with his first wages, a little less than 3,000 yen.

Hideaki then worked for an iron factory for 40 years. Now retired, he still works when asked. “I’m a hard worker, too, like my mother,” he said.

Since the deaths of his two brothers, Hideaki looks over the family plot, which has been moved to a public cemetery. Though he has three daughters and six grandchildren, he wonders whether the grave site will be cared for after his own passing. “I hope our grave site will be faithfully tended for generations, because it was very important to Mom,” Hideaki said, gently pouring water to purify the gravestone inscribed with his parents’ names.