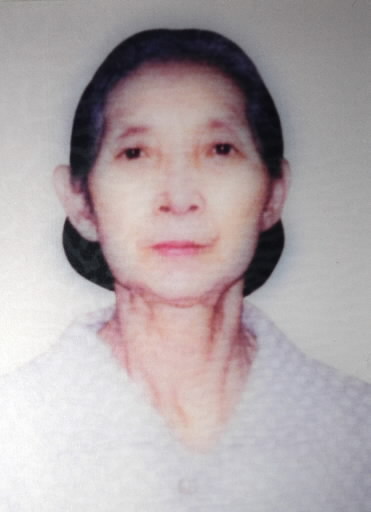 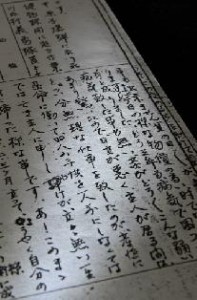 Anguish revealed in a survey: Determined to go on for her children

“My husband was my pillar of strength,” said Ayame Sogioka. “After I lost him, there was only hardship.” In 1952, seven years after the war ended, she wrote this short sentiment on a survey sheet about the husband stolen away by the atomic bombing. The survey was conducted by the town office of Kawauchi, now part of Asaminami Ward.

The survey was given to 230 bereaved family members, including family members of the Kawauchi Volunteer Fighting Corps, all of whom were killed in Nakajima-shinmachi (present-day Nakajima-cho, Naka Ward), near the hypocenter, while demolishing buildings to create a fire break. The survey respondents provided such information as how their loved one died, the number of family members left behind, and their living conditions. These responses were then compiled in a book, a copy of which has been preserved at Hiroshima University’s Research Institute for Radiation Biology and Medicine (RIRBM), located in Minami Ward, Hiroshima.

Ms. Sogioka passed away in 1998 at the age of 86. Ikuko Sakai, 75, Ms. Sogioka’s second daughter and a resident of Asakita Ward, saw her mother’s survey sheet for the first time this summer. “She never told me about it,” Ikuko said. “There was pain inside her, I think, that she just couldn’t share with her children. If the atomic bombing had never happened, she would have lived an easier life.”

In the survey she completed, Ms. Sogioka wrote that recalling the time was still horrifying for her. Back then, she was 33 years old. She had been blessed with five children, two boys and three girls ranging in age from a baby, born just eight days prior to the bombing, to a 13-year-old. But on August 6, 1945, her husband Shigeo, 37, perished while working for the Kawauchi Volunteer Fighting Corps. Her eldest son, Takakuni, 13, who was mobilized as a student and laboring in Hatchobori (now part of Naka Ward), did not return home, either.

In one part of the survey, where respondents could write freely, Ms. Sogioka revealed the details of her sorrow. Reflecting on Takakuni, she wrote, “My son must have cried out for me over and over before he died.”

Takakuni had complained of a stomachache on the morning of the bombing. But Ms. Sogioka sent him to the work site, believing it was “for the good of our country.” Until the end, she regretted this decision. Expressing her determination to her late husband, she wrote on the survey: “I will work hard to raise our four children to become productive members of society.”

Encouraged by her relatives, who said it would be best for the children, Ms. Sogioka remarried soon after Shigeo’s death. Her second husband, now deceased, was Toshiaki, seven years her junior. Although many other women of the town lost their husbands in the bombing, too, most did not marry again. Ms. Sogioka’s daughter Ikuko believes that her mother’s decision to remarry caused conflicted feelings in her heart.

After remarrying, Ms. Sogioka was no longer entitled to receive the condolence money given to wives whose husbands had died in the atomic bombing. The family carried on as farmers, like generations before them, but they lacked a stable income. On her survey sheet, Ms. Sogioka rued the hardship she faced, saying, “We’re barely able to make ends meet.”

Despite deteriorating health, and frequent visits to the hospital, Ms. Sogioka went on, tilling the land. Because she wanted her children to avoid the same fate, she stressed to Ikuko and the other children, “You need to learn a trade.” The mother encouraged her three daughters to go to vocational schools, where they learned to make clothing and kimonos, and her son to attend a technical high school.

Ikuko decided to have her two sons and her three grandchildren look at a copy of her mother’s survey sheet. “I don’t know what they’ll come away with, but I hope they’ll understand the anguish that the people of Kawauchi had to endure because of the atomic bombing and the life that my mother was forced to lead.” As a member of a social welfare council, Ikuko helps with peace education activities at a nearby preschool. She plans to share the stories of the people of Kawauchi with the children there.