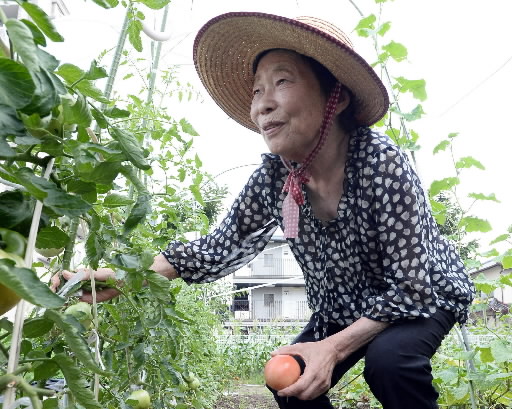 Part 1: Since that fateful day
Article 4: Losing both parents

Summer has come and the tomatoes in the garden behind Sayoko Monzen’s house have begun to ripen. Ms. Monzen, an 81-year-old resident of the Kawauchi area, part of Asaminami Ward, carefully picked some tomatoes, explaining that they were for her grandchildren. As her daughter Sumie Himemoto, 62, looked on, she said, “Mom has always put the needs of her family before her own.” Ms. Himemoto lives in the same neighborhood.

Sayoko Monzen’s father Tomeichi died of tuberculosis in 1943 at the age of 42. Her mother Natsumi perished in the A-bomb attack on August 6, 1945. As a member of the Kawauchi Volunteer Fighting Corps, she was helping to demolish buildings to create a fire lane in the Nakajima-shinmachi district (now part of Nakajima-cho in Naka Ward), near the hypocenter. Her mother was 40 at the time. Ms. Monzen, then 13 years old, and her two younger sisters, then 10 and 7, were orphaned.

On the morning of August 6, the flash of the atomic bomb struck the Kawauchi area, though it was more than 10 kilometers from the hypocenter. Ms. Monzen was in the schoolyard of Kawauchi National School, a bamboo spear in her hand as the students practiced fighting techniques. “I thought a bomb had fallen on the school grounds, so I threw myself flat on my stomach on the ground,” she said. Her family’s house lurched to one side as a result of the bomb’s blast.

On August 7, she ventured into the area near the hypocenter to search for her mother, but found no trace of her. Ms. Monzen’s aunt, who lived near her house, also lost her husband in the atomic bombing and she had five children to look after. Ms. Monzen had no one to lean on. “I had to feed my two sisters. There wasn’t time to cry,” she explained.

She had only her parents’ small field of 0.3 hectare to support them. By watching the people around her, she learned to grow Hiroshima-na (a leafy vegetable and a staple of the Hiroshima area) and burdock root. “I tilled the land and worked as hard as I could, thinking I could pay for my sisters’ school fees that way,” Ms. Monzen recalled.

All of a sudden, the adolescent girl had to become an adult, and even a parent. She had to play the role of the father, providing for her family, and the mother, treating her sisters with loving discipline.

As she did not want her sisters to feel ashamed of what they wore, Ms. Monzen made them clothing from her mother’s cotton kimonos. Although she did not attend high school herself, she was able to send her sisters to a kimono-making school.

The number of children in Hiroshima who became “A-bomb orphans” is estimated to have been 4,000 to 6,500. Some of them were forced to live on the streets. “Thanks to our farmland, we were able to go on,” Ms. Monzen said. She recalled the compassion shown by some of her neighbors, who sometimes invited her and her sisters to bathe at their houses.

When she was 18, Ms. Monzen agreed to an arranged marriage. The couple had a son and a daughter, but the relationship soured because her husband paid little interest in the family. About four years after they wed, the marriage broke up.

“After that, I worked for my children,” she said. Besides farm work, she labored at construction sites among the male workers. She also worked for a soy bean paste factory and an agricultural cooperative. Little by little, she was able to save money to raise a new gravestone for the family plot and build a new home. “Looking back, I did a good job,” she said.

Now Ms. Monzen has six grandchildren and 13 great-grandchildren. They come to visit her on weekends. Ms. Himemoto, her daughter, stops by to prepare dinner for her every day. When Ms. Himemoto said to her, “It’s your hard work that has made us what we are now,” Ms. Monzen replied, “You don’t have to go through those hardships now. We live in much better times.” She hopes that people appreciate how lucky they are to live in this era.