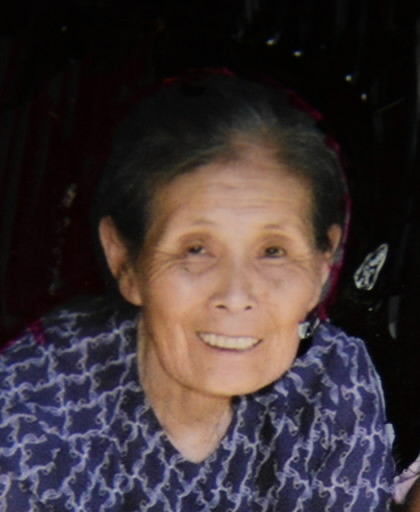 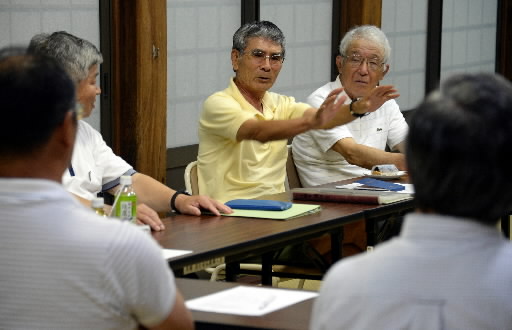 On the night of July 9, nine men assembled at Jogyoji Temple, located in the Kawauchi area of Asaminami Ward. The men are members of the steering committee of an association for the war-bereaved of the Kawauchi Volunteer Fighting Corps, which was composed of residents of the former town of Kawauchi. They gathered to make arrangements for a joint memorial ceremony that is held on August 6 each year in front of the Monument for the Volunteer Army Corps, which stands in Hiroshima Peace Memorial Park in downtown Hiroshima.

It has been 68 years since some 200 people from the town lost their lives in the A-bomb attack while demolishing buildings to create a fire lane in the Nakajima-shinmachi area (now part of Nakajima-cho in Naka Ward), located about ten kilometers to the south of Kawauchi. Many of the townspeople who lost breadwinners in their families, and had to endure hardships through the postwar period, have now passed away. One member of the steering committee, Hiroshi Dobara, 77, expressed a feeling of frustration, saying, “How will we hand down the things we experienced?”

The other eight members also shared such views as “Memories of the past are fading because of a generational change” and “Can children of this era really understand the hardships of that time?”

Hiroshi Dobara’s father Tatsunobu was exposed to the atomic bomb in Fujimi-cho (now part of Naka Ward), roughly one kilometer southeast of the hypocenter. He was hauling lumber from the demolished buildings.

Hiroshi, then 9, saw the bomb’s flash. He was being treated for pleurisy at a hospital in the Yokogawa area (in today’s Nishi Ward), about 1.5 kilometers to the north of the hypocenter. The hospital was destroyed by the blast, and Hiroshi became trapped under the wreckage of the building, but he was not seriously injured.

Two weeks later, his father died at home at the age of 43. His last words were: “Hiroshi, I’m depending on you.”

With his father’s death, Hiroshi, his mother Shinayo, and two sisters, 3 and just 9 months at the time, were now on their own. Their tiny 0.1 hectare farmland could not support the family so his mother worked on tatami mats at home and labored as a day worker at construction sites in connection with the city’s reconstruction.

Wanting to make his mother’s life easier, Hiroshi entered the Mitsubishi Heavy Industry’s school for training technical specialists after he completed junior high school. He then got a job at a factory in Gion-cho (now part of Asaminami Ward), working for the company Hiroshima Precision Machine Manufacturing. After he got married, he continued to live with his mother. He recalls how she shared the stories of her hard times with his son and daughter. His mother finally passed away in 2007 at the age of 96.

When Hiroshi returned home after the meeting, his granddaughter Ayano greeted him. Ayano is a third-year student at Jonan Junior High School. That same day, the students at her school made origami paper cranes, which will be offered at the monument by student representatives on August 6.

“I heard it was a very hard time,” Ayano said. “I don’t think I could bear it.” Hiroshi was particularly pleased when Ayano told him that she wanted to learn more about her great-grandmother.

An important decision was made at the meeting at Jogyoji Temple. It was decided that materials will be compiled about the A-bomb victims from the Volunteer Fighting Corps and the history of the town. “The atomic bomb took away fathers from the town and caused the mothers awful hardships,” Hiroshi said. “The history of Kawauchi must never be forgotten.”

(This article concludes part 1 of this series.)