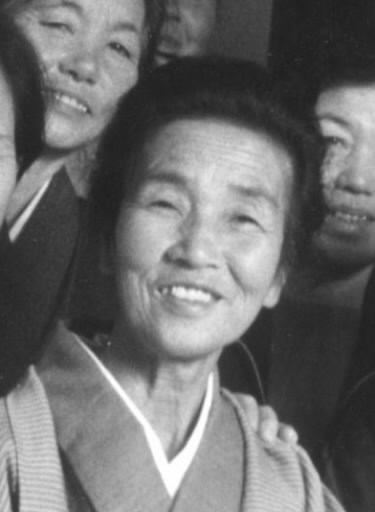 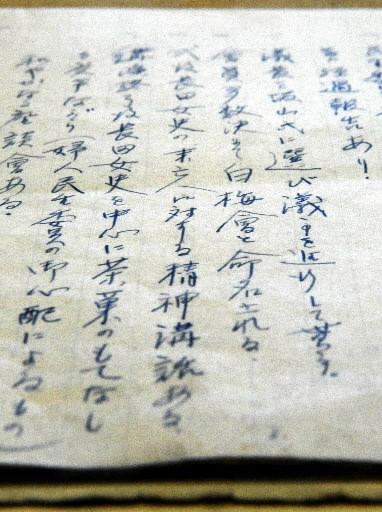 Part 2: Supporting each other
Article 2: “The White Plum Society”

An old notebook has been preserved at Hiroshima Peace Memorial Museum. Recorded in this notebook is the history of the “Shiraume Kai” (“The White Plum Society”), a support group that was formed by wives in the town of Kawauchi (now part of Asaminami Ward) who lost their husbands to the atomic bombing or to the war.

The group was established in 1949, four years after the bombing. It took its name from the Japanese plum tree, which braves the cold of winter and produces beautiful white blossoms. The group’s activities over its first three years have been neatly written down in the notebook.

Kawauchi was home to more than 70 widows whose husbands died in the atomic bombing. Yukiko Takasaki, 81, a resident of the town, reminisced about her mother-in-law, Haru Takasaki: “She worked non-stop every day. Her only pleasure was spending time with her friends,” said Yukiko, who lived with Haru for 44 years after marrying her son.

Haru’s husband Masaru Takasaki perished in the A-bomb attack on August 6, 1945. As a member of the Kawauchi Volunteer Fighting Corps, Masaru, then 51, was helping demolish buildings to create a fire lane in the Nakajima-shinmachi area (now part of Naka Ward) near the hypocenter. Haru searched for days, but could find no trace of his remains.

With Masaru’s death, Haru and her family also lost their breadwinner. What’s more, they were forced to relinquish most of their farmland of three hectares as a result of the land redistribution policy pursued after the war. Haru worked long hours in the fields with her son Yutaka, now 86, who was demobilized from the Imperial Navy and returned home when he was 18. She married off her two daughters.

Another entry reads: “September 4. Shellfish gathering. Freeing ourselves from the cares of everyday life, we enjoyed digging clams, feeling a kinship with those in the same circumstances.” The members of the group sometimes gathered shellfish or went hiking to unwind in the open air. Haru would try to cheer up others by telling them, “When you feel lonely, go to the mountains or to the beach and call your loved one’s name at the top of your lungs.”

The notebook also describes how the group was a source of financial support to the widows. Some found work through the group. Donations to the group from the townspeople and other contributors were saved and used to help with living expenses. Members held sessions where they learned practical skills, like mending socks, or ideas to improve the quality of their lives.

Today, Shiraume Kai serves as a welfare organization for mothers, children, and widows in the Kawauchi area. The notebook was given to the museum by Minako Ishigame, 76, a former president of the group. Ms. Ishigame felt that the notebook stands as a testament to how the women supported one other to go on with their lives, and that it should be handed down to posterity.

Another mark made by Shiraume Kai is the monument to the local war dead and other victims of the war, which stands behind Kawauchi Elementary School. The group’s first president, Chiyono Nishimura, and other members raised money and erected the monument in 1953. (Ms. Nishimura died in 1983 at the age of 89.) The monument is inscribed with “Kawauchi Widows’ Society Shiraume Kai” and includes Haru’s name among the other members of that time.

Every summer, a local senior citizens’ group holds a ceremony before the monument on the day of the community’s Bon Festival dance. This year the ceremony will be held on August 10. Yukiko, who has never missed the ceremony, sees it as an opportunity for local citizens to gather in the hope of handing down the spirit of mutual support fostered by Shiraume Kai.