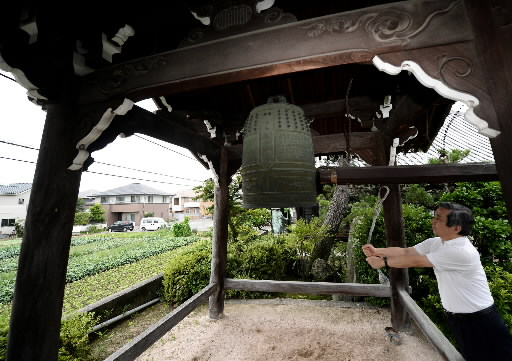 In the Kawauchi area of Hiroshima’s Asa Minami Ward, the bell of Jogyoji Temple heralds the arrival of morning. The bell is rung six times at 6 a.m. every morning without fail. “I toll the bell with a desire for peace,” said Atsushi Sakayama, 64, the temple’s chief priest, as he swung the bell hammer.

Jogyoji temple, which was built in 1570 during Japan’s Warring States period, is affiliated with the Jodo Shinshu sect of Pure Land Buddhism. During World War II, the temple’s hanging bell was turned over to the government because of a shortage of metal. Temple adherents residing in Kawauchi chipped in to purchase the current bell, which was manufactured in April 1952.

At that time, Mr. Sakayama’s grandfather, Kishu, was chief priest of the temple. Kishu, who died in 1972 at the age of 79, began the tradition of ringing the bell every morning.

The bell is rung six times at 6 a.m. signifying both August 6 and the six characters in the name of Amida Butsu (Amitabha, the principal Buddha of the Jodo Shinshu sect). On August 6, 1945, when the United States dropped the atomic bomb on Hiroshima, the approximately 200 members of Kawauchi’s Volunteer Fighting Corps were demolishing buildings near the hypocenter. All were killed.

Many victims who fled to Kawauchi after experiencing the A-bombing at school or work also died. Kishu Sakayama attended their cremations. Day after day smoke rose from the banks of the Furukawa River.

The women who had lost their husbands in the atomic bombing worked in the fields from early in the morning to support their families. When they heard the sound of the temple bell, they stopped their work and put their hands together in prayer.

A free day care center was opened at Jogyoji Temple. Masue Takeuchi, 70, a native of Kawauchi who now resides in Hiroshima’s Nishi Ward, went there until she entered elementary school. “I sat at a long desk with other kids and ate the lunch that my elder sister had fixed for me,” she recalled. “We all sang together.”

Ms. Takeuchi’s father, Kyoichi Shitanaka, then 46, was a member of the Volunteer Fighting Corps who was killed in the A-bombing. Her mother, Chie, was 33. Chie, who died in 2002 at the age of 90, was left with three boys and two girls. Her youngest child had been born just 11 days before the A-bombing.

Ms. Takeuchi’s sister and brothers told her that one day their mother took all of them to the banks of the Ota River near their home, intent on killing herself and forcing her five children to die with her. But the children said they didn’t want to die, and Chie was deterred her from throwing herself into the river.

Afterwards Chie sent her five children to the day care center at the temple and worked hard. “Thanks to the temple, my mother was able to concentrate on farming and our family somehow managed to get by,” Ms. Takeuchi said. The temple’s day care center remained open until 1953, when a municipally run kindergarten opened in Kawauchi.

On September 6, 1945, one month after the atomic bombing, Jogyoji Temple held a memorial service for those who had been killed. Many families had been unable to find the bodies of their loved ones and could not hold a funeral. About 600 friends and family members of the victims filled the temple grounds.

Memorial services continued to be held on the 6th of every month. On that day only the women took a break from their farm work and gathered at the temple. When Mr. Sakayama was a boy, the temple’s main hall was always filled with people. “People tended to linger at the temple,” he said. “It was a place where they could give each other encouragement and feel at home.”

Twenty-five years have passed since Mr. Sakayama took over as chief priest of the temple, and he senses the passage of time. Most of the women who supported their families after the war have died. Masako Nomura, 92, who still resides in Kawauchi, is now the only one of them who attends the monthly memorial service on the 6th. “People lost their families and were forced to struggle to survive,” he said. “What the A-bombing did to Kawauchi must not be forgotten.” With this in mind, he continues to ring the temple bell.