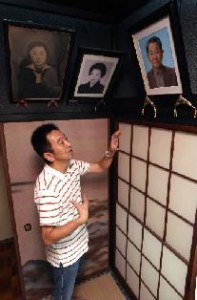 Forebears buffeted by war between Japan and the U.S.; relief supplies delivered to struggling hometown

Eight photographs of deceased people hang on the walls of the Buddhist altar room in Shigenori Doi’s home in the Kawauchi area of Hiroshima’s Asa Minami Ward. One shows a young girl in a school uniform. “My family suffered extraordinarily in the war,” said Mr. Doi, 49, a company employee, who has pieced together the story from things he has heard: his forebears whose lives were thrown into confusion between warring Japan and the United States and his aunt who lost her life in the atomic bombing.

Mr. Doi’s father, Shigenobu, who died in 2007 at the age of 78, was a second-generation Japanese-American. He was born in Fresno, California. His parents had emigrated to the U.S. from their home in Kawauchi.

In 1934, when Shigenobu was 5 years old, he and his sister, Nobuko, who was three years older, were brought to Japan by relatives because their parents wanted them to be educated in Japan. They began living with their grandparents in Kawauchi. Their sister, Shizuko, who was five years younger than Shigenobu, later came to live with them as well.

War between the U.S. and Japan broke out in 1941. A bitter fate awaited all three of the Doi children.

Nobuko was killed in the A-bombing on August 6, 1945 while dismantling buildings near the hypocenter as a member of Kawauchi’s Volunteer Fighting Corps. She was 18.

In 1952 Kawauchi conducted a survey of the families of local residents who had died in the atomic bombing. “My sister died as a victim of the Japanese people. When I think of her having died in terror and anguish, I feel so sorry for her,” Shigenobu wrote on the questionnaire.

Shigenobu dropped out of middle school and worked hard cultivating the fields. After graduating from middle school, Shizuko contributed to the family’s income by working as a seamstress. Then in 1955 she went back to the U.S. at the suggestion of her parents, who were still there. Shigenobu decided to remain in Kawauchi to take care of the family home, so the brother and sister were separated.

Shizuko married a Japanese-American named Yoshioka. She is now 79 and still lives in Fresno. “I have only bitter memories of Hiroshima,” she said. “But my family in the U.S. suffered as well.”

Shizuko’s parents worked in a local vineyard and saved their money little by little. But during the war they forfeited their entire savings and were sent to an internment camp. Approximately 120,000 Japanese Americans were forced to undergo the same hardship. “War is wrong,” Shizuko said.

In 1948, three years after the end of the war, a large quantity of food, clothing and other relief supplies were sent to Kawauchi by natives of Hiroshima Prefecture who were living in the U.S. and who were concerned about the plight of the people in their hometowns. There is a photograph that shows families of the Volunteer Fighting Corps members who had died along with the supplies piled up on the grounds of a temple.

When Mr. Doi was in elementary school, Shizuko and other American relatives came to visit once. Mr. Doi also saw Shizuko and her family when he and his wife went to the U.S. on their honeymoon.

But he has never heard details of the story of his family, who were buffeted by the tide of history: emigration, war, the atomic bombing. “I’m sure my father didn’t say much about it because he didn’t want to recall those times,” Mr. Doi said. As he grows older, he has begun considering another idea: “If possible, I’d like to go back to the U.S. once more and ask Aunt Shizuko about my father and Aunt Nobuko.”