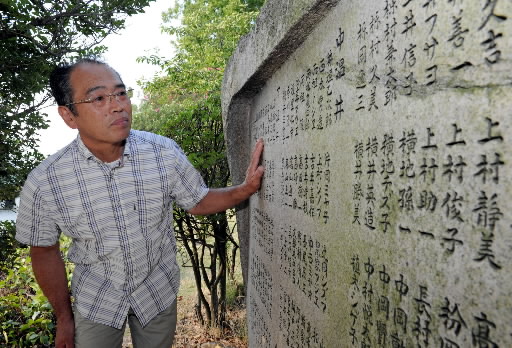 Part 2: Supporting each other
Article 5: Monument to the victims

Monument raised to remember 180 who perished: Handing down grandfather’s wish

The summer sun beats down on Hiroshima Peace Memorial Park, the buzzing of cicadas fills the air. In a green zone on the west side of the park, by the Honkawa River, stands the Monument for the Volunteer Army Corps. Engraved on the back of the monument are the names of 180 victims of the atomic bombing, members of the Kawauchi Volunteer Fighting Corps who were residents of the town of Kawauchi, now part of Asaminami Ward.

Toshiki Kamimura, 59, a farmer living in Kawauchi, recalled what his grandfather Shigeru would say over and over again: “My daughter died for me.” (Shigeru died in 1981 at the age of 85.)

On August 6, 1945, when the atomic bomb exploded above the city, Shigeru was in the hospital in the town of Midorii, now also part of Asaminami Ward. He had undergone surgery for appendicitis, and it was taking a long time for him to recover from the infected incision.

Shigeru, then 49, had been a squad leader of the corps. On the day of the bombing, his oldest daughter, Shizumi, then 21, took his place as a corps member and was helping to tear down buildings to create a fire lane in the Nakajima-shimachi district (now part of Naka Ward). The work site was near the hypocenter and Shizumi perished in the blast. Mr. Kamimura heard from his aunt that his grandfather wept in his hospital room. “Why did I get sick at a time like this!” he said.

Compounding Shigeru’s grief was the loss of his fellow corps members. It was painful for him to meet with bereaved family members. “My grandfather felt responsible,” Mr. Kamimura said. “And he must have felt guilty for having survived.” Shigeru neglected the work on his own farm to help with the chores of neighbors who had lost men in the family.

Shigeru also devoted himself to consoling the souls of his daughter and his friends. In 1946, a monument to their memory was raised on the fire-ravaged grounds of Seiganji Temple in the Zaimoku-cho district (now in Naka Ward), where members of the corps once took breaks. With the construction of Hiroshima Peace Memorial Park and Peace Boulevard, the temple was relocated to the foot of Mt. Mitaki. At this time, the monument was moved to the cemetery at the temple.

Shigeru heard some bereaved family members say that they wanted to hold memorial services at the site where the victims had died. He spoke with residents of the town and urged them to act to create another monument. He served as head of the group of bereaved family members and engaged in negotiations with the city government. The new monument was unveiled in August 1964.

Since that year, the group has held a memorial service in front of the monument annually on the morning of August 6. Though invitations were not sent, last year about 200 residents and family members of the victims from the Kawauchi area attended the service. “The monument is a symbol of the sorrow the people of Kawauchi have shared and our history of helping one another,” Mr. Kamimura said.

Mr. Kamimura has since followed his father Tetsuo, 87, by becoming one of nine members of the group’s steering committee. Three of these members--Mr. Kamimura and two others--were born after the war. With the numbers of those having firsthand knowledge of the war era dwindling fast, the group feels a sense of urgency to collect accounts and materials related to the war.

The monument reads: “Hand down forever this noble sacrifice, now the land shows signs of peace.” Mr. Kamimura feels that these words express the mission his grandfather has given him.

Mr. Kamimura’s second son Ryusuke, 30, shares his father’s feelings. Ryusuke, who lives with him, said that he wants to follow in his father’s footsteps and plans to attend the memorial service. In this summer, 68 years since the atomic bombing, they will stand before the monument to console the war dead and pledge to pass down the experiences of war.

(This article concludes the series “Living in Kawauchi, Town of the Atomic Bomb.”)