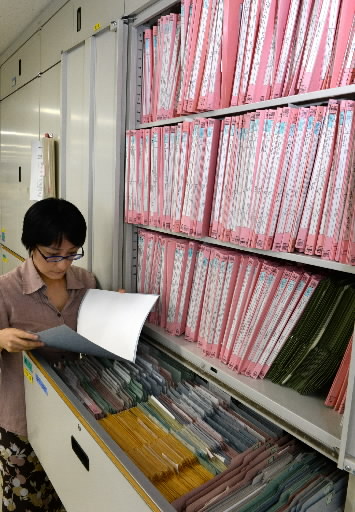 Fragile framework is addressed as presence grows on world stage

Abolish nuclear weapons through the solidarity of cities.

With this rallying cry, Mayors for Peace was established 31 years ago in the midst of the Cold War. Since that time its membership has grown extensively, beyond the framework of nation states. However, the organization has reached an important stage, seeking to find an effective way to advance the elimination of nuclear arms by the year 2020, the vision which has helped attract cities to become members of the global network. With the General Conference of Mayors for Peace set to open at the International Conference Center Hiroshima on August 3, the Chugoku Shimbun will explore the challenges the organization now faces.

The secretariat for Mayors for Peace is located in the office of the Hiroshima Peace Culture Foundation office, 400 meters southwest of the A-bomb’s hypocenter. The shelves are filled with files, each one containing a member city’s application and correspondence.

Mayors for Peace was founded in 1982 in response to a call by the mayors of Hiroshima and Nagasaki for solidarity among cities supporting nuclear abolition. Early on, its membership grew slowly, but in 2005 alone, 601 cities joined the organization.

In 2003, two years before the surge in membership, Mayors for Peace announced a new campaign called the “2020 Vision,” which calls for immediate action to advance the abolition of nuclear weapons. A concrete action plan was also incorporated, resulting in a rise of support. “Articulating the goal of eliminating nuclear weapons was the primary factor,” explained Mr. Murakami. From 300 to 1,000 cities have joined Mayors for Peace each year since this time.

Meanwhile, the mayors of Hiroshima and Nagasaki, serving as the president and vice president of Mayors for Peace, respectively, have been given the opportunity to speak at every preparatory committee or review conference of the Nuclear Non-Proliferation Treaty (NPT) since 2003.

Akira Kawasaki, co-chairperson of the International Campaign to Abolish Nuclear Weapons (ICAN), an NGO, said, “The speeches made by Mayors for Peace are given more weight than those made by other NGOs. This idea is shared by officials of governments.”

With the increase in its membership, Mayors for Peace has stepped up its presence on the international stage. At the same time, its fragile framework has been recognized as a problem. In some cases, the mayors of overseas nations promptly joined when asked, since no fee was assessed to become a member, but when new mayors took office, the ties faded.

A language barrier, too, must be overcome. Communication between the secretariat and member cities is mainly done by email in English. When messages are sent in foreign languages other than English, translation is needed for the Hiroshima mayor. Above all, there is no clear mechanism to follow the activities being pursued by member cities for nuclear abolition.

Member cities in name only

The secretariat for Mayors for Peace has 10 staff members, including Mr. Murakami. There are three non-Japanese specialists stationed in Europe and the United States, charged with soliciting new members and gathering information on nuclear issues. A senior official of the Hiroshima municipal government said, “There is too much for Hiroshima to handle alone.”

The situation in France offers a model that may help solve these administrative issues. France, which has 145 member cities, set up a branch office of Mayors for Peace in 1997 and each member city was asked to pay a certain amount as an annual membership fee, relative to its size. The money collected is then used to defray the costs involving personnel and translation of information received from Hiroshima into French.

To better organize the regional activities of the organization, a new “leader cities” system will be approved during the general conference. All member cities will also be asked to pay an annual membership fee of 2,000 yen per member in order to strengthen their sense of participation. These steps are the first measures for reforming the organization.

Japan itself is far from able to boast a solid foundation, either. In 2011, students at Hiroshima Shudo University carried out a survey of 180 Japanese member cities. The results indicated that more than 10 percent of those surveyed had not pursued any particular actions with regard to nuclear abolition, making them members in name only. Tadaakira Jo, a professor at Hiroshima Shudo University and an expert in international law, said, “First, member cities in Japan should be encouraged to be more active, which will make Japan’s appeal stronger at the national level and set an example for cities overseas.”