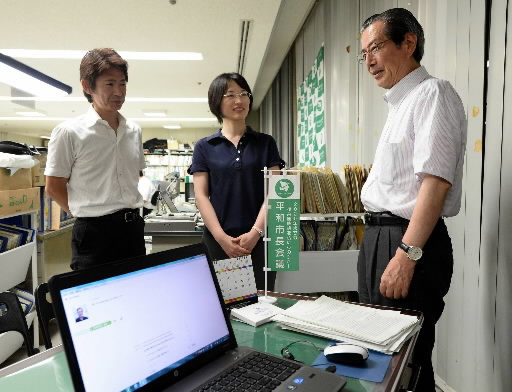 At 10 p.m. on July 30 in the headquarters of Mayors for Peace at the Hiroshima Peace Culture Foundation, Yasuyoshi Komizo, the foundation’s chairperson, talked via Skype with the Mayors for Peace representative in Manchester, England, who serves as one of the vice presidents of the organization.

Speaking in English, Mr. Komizo discussed the direction of the organization’s four-year action plan, which was to be debated at the general conference scheduled to start on August 3, saying he said he would like to focus on implementing a treaty to ban nuclear weapons as soon as possible.

“There are various paths to nuclear abolition, but we will focus on the conclusion of a treaty banning nuclear weapons,” Mr. Komizo said, “because that is the desire of the people.”

In 2003 Mayors for Peace announced its 2020 Vision Campaign, which calls for the elimination of nuclear weapons by 2020, the 75th anniversary of the atomic bombings of Hiroshima and Nagasaki. The campaign, which has been launched both in Japan and overseas, is centered on a total ban on the manufacture, possession and use of nuclear weapons.

When he came to Hiroshima to attend the Peace Memorial Ceremony in August 2010, Ban Ki-moon, secretary-general of the United Nations, hailed the 2020 Vision as “a perfect vision.”

A resolution in support of the 2020 Vision was passed at the annual U.S. Conference of Mayors in Las Vegas in June of this year. Jacqueline Cabasso, an American peace activist and executive adviser to the Hiroshima Peace Culture Foundation, said that setting a specific deadline accentuated the strong desire for nuclear abolition and noted that the vision differed from a political expression.

No prospect for start of negotiations

Mayors for Peace has a total of 577 member cities in the five nuclear powers, including the U.S., as well as in India, Pakistan, and Israel, de facto nuclear powers. These cities have declared their opposition to nuclear weapons while under the protection of nuclear deterrence. This gesture has not prompted any action on the part of their governments.

This holds true for Japan, the only nation to experience atomic bombings. The government’s policy is inconsistent, sticking with reliance on the nuclear umbrella of the U.S. for security while calling for the abolition of nuclear weapons. The government has also aligned itself with the U.S. on the path to nuclear abolition, supporting its policy of calling for step-by-step reductions in nuclear arms. There is no prospect for the start of negotiations on a treaty to ban nuclear weapons, much less the conclusion of a treaty by 2015 as set out in the 2020 Vision.

In December 2010 Mayors for Peace began collecting signatures on petitions, both in Japan and overseas, calling on world leaders to start negotiations on a treaty banning nuclear weapons. So far more than 770,000 signatures have been collected.

But only 137 municipal governments in Japan, representing less than 10 percent of its member cities, have cooperated with Mayors for Peace and submitted petitions. Naomi Arase, director of the Peace and International Solidarity Promotion Division for the City of Hiroshima, said, “Even in Japan, the purpose of the treaty has not been conveyed to municipalities or to citizens.”

As part of a survey of the 19 executive cities of Mayors for Peace conducted by the Chugoku Shimbun in July, the cities were asked the following question: In your city, do you see positive signs of support for nuclear abolition by 2020, the goal promoted by Mayors for Peace? Of the 10 cities that replied, only Nagasaki said, “Yes, a lot.” Six cities, including Hiroshima and Volgograd, Russia, replied, “Yes, some.”

The call to abolish nuclear weapons, based on the inhumanity of nuclear weapons and a desire to avoid another atomic bombing, has continued for 68 years. The Mayors for Peace conference is taking place as this effort gains strength around the world. The member cities must reaffirm their role in bringing about a world without nuclear weapons and discuss ways in which they can do this effectively.

The replies of the 19 executive cities to the survey question on nuclear abolition by 2020 were as follows:

No, not much
1 Manchester, England

Not at all
None