An interview with Foreign Minister Fumio Kishida: Japan must take the lead in the debate on nuclear disarmament 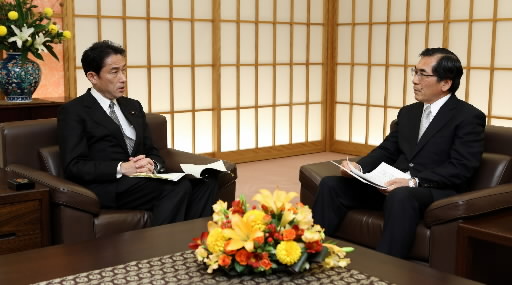 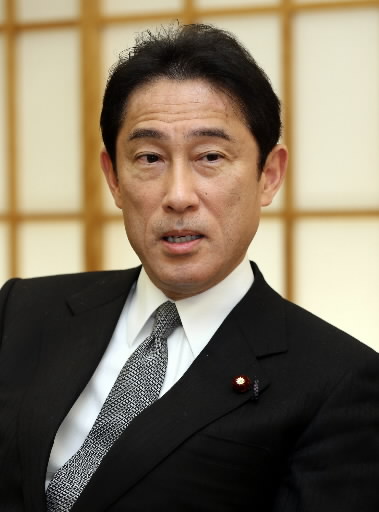 More than a year has passed since the launch of the second administration of Prime Minister Shinzo Abe in which Fumio Kishida, who represents Hiroshima District No. 1, serves as foreign minister. As the 70th anniversary of the atomic bombing in 2015 approaches, how will the Hiroshima-based foreign minister advance the cause of the abolition of nuclear weapons, the wish of Hiroshima? Meanwhile Japan’s relations with China and South Korea remain strained over perceptions of history and territorial issues. Starting this year the Abe administration is poised to enter into serious debate on allowing Japan to exercise the right of collective self-defense. Japan’s diplomacy and its security policy are approaching a major turning point. In an interview with Yoshinori Okatani, president of the Chugoku Shimbun, Mr. Kishida discussed his thoughts on nuclear abolition and the outlook for a multitude of issues facing the nation. The following are excerpts from that interview.

Okatani: Happy new year! One year has passed since you became foreign minister. What sort of a year has it been?

Kishida: I’ve focused on the issues of nuclear disarmament and non-proliferation in particular. For example, I set up the system of Youth Communicators for a World without Nuclear Weapons because I believe that young people also must tell future generations of the inhumanity and horror of nuclear weapons.

In September 2013 I gave a speech at United Nations headquarters in New York during a high-level meeting of the General Assembly on nuclear disarmament. In my speech I stated my personal desire to bring about nuclear disarmament. I’ve taken the opportunity to say the same thing on various occasions.

Okatani: In October of last year, a joint statement citing the inhumanity of nuclear weapons and opposing their use was issued at the U.N. Japan, which had always declined to support similar statements, signed for the first time. This seemed to reflect a strong personal desire on your part.

Kishida: As the only country to experience atomic bombings, Japan has a responsibility to take the lead in the debate on nuclear disarmament. But Japan is in a very tough security environment right now. I directed employees of the Foreign Ministry to accommodate Japan’s wishes with reality and said we should sign the joint statement.

I also met with the foreign ministers of New Zealand and other nations involved to ask for their cooperation, and the statement was revised to reflect Japan’s feelings. In terms of Japan’s contribution to nuclear disarmament, signing the joint statement was a big step, but we have a long way to go before reaching the goal.

Kishida: First of all, it’s important for them to be exposed to the reality of the atomic bombing by hearing the experiences of survivors and visiting the Peace Memorial Museum. I’d also like them to hear from the Youth Communicators for a World without Nuclear Weapons. Beyond that, we must debate the issues and then put out a strong message from Hiroshima. I’d like to tie this to the spring 2015 Nuclear Non-proliferation Treaty (NPT) Review Conference and move forward toward a world without nuclear weapons.

Okatani: Meanwhile the government is accelerating its negotiations to conclude a nuclear power agreement with India, which is not a party to the NPT. This has been criticized by people in Hiroshima, and since the 2011 disaster in Fukushima the public has concerns about the peaceful use of nuclear energy.

Kishida: The nuclear non-proliferation regime must not be undermined by the signing of an agreement. In recent years India has taken a positive approach to the non-proliferation regime, such as by observing a moratorium on nuclear testing. Through the framework of the agreement, India will in effect be integrated into the NPT regime. We will proceed with discussions while observing India’s handling of various matters.

Visit to Hiroshima by Obama

Okatani: Caroline Kennedy has assumed her post as U.S. ambassador to Japan. She visited Hiroshima on her first trip to Japan in 1978 and has a strong interest in the city.

Kishida: I hope she will visit Hiroshima again soon.

My wife and I celebrated the ambassador’s birthday with Ms. Kennedy and her husband shortly after she arrived in Japan. Among other things, we talked about her trip to Hiroshima and her favorite baseball team, the Boston Red Sox, including the fact that both the Red Sox and the Hiroshima Toyo Carp wear red.

I gave her a cosmetic brush made in Kumano in Hiroshima Prefecture. Judging from her thank-you note, it seemed she was pleased with the brush, and she mentioned that friends had told her that her make-up looked better. I’m sure she has a strong interest in Hiroshima.

Okatani: There seems to be an even stronger desire in Hiroshima for global figures such as Ms. Kennedy, and particularly President Obama, to visit the city. What are your thoughts on lobbying Ms. Kennedy, who has a close relationship with Mr. Obama, to get him to come here?

Kishida: I realize that it would be highly significant for Mr. Obama, who has called for “a world without nuclear weapons,” to visit Hiroshima and to see for himself the reality of the destruction caused by the atomic bomb. Now that Ms. Kennedy, who has a strong interest in Hiroshima, has been appointed ambassador, I think the president may consider coming. I will raise the issue with Ms. Kennedy, but at this point nothing has been decided.

Okatani: Hiroshima and Nagasaki were determined to recover from the destruction they suffered. Today, the peace of many people throughout the world is threatened, not only by war but also by poverty and disasters. I’d like you to convey to these people and to prominent people around the world that Hiroshima recovered from disaster and that it is a city of hope. I hope that, as a foreign minister from Hiroshima, you will work to do that.

Kishida: I agree that looking at peace from a broad perspective is very important. With that in mind, I will work hard to get Hiroshima’s message out.

Okatani: The relocation of the U.S. military’s Futenma Air Station [in Okinawa] is a major challenge for the Abe administration. How do you feel the government should proceed in terms of reducing the burden on Okinawa?

Kishida: When considering the current situation at Futenma Air Station, which is located in a city, we need to be flexible. I’d like to move forward with shifting the training flights of the MV-22 Osprey tilt-rotor transport aircraft deployed at Futenma outside of Okinawa and with relocating the KC-130 air tankers to the Marine Corps Air Station in Iwakuni [Yamaguchi Prefecture].

Okatani: A lot of concern has been expressed about the safety of the Osprey and the relocation of the air tankers to the base in Iwakuni.

Kishida: I’m aware that there are various opinions on the issue and that people are concerned. I will continue to work to thoroughly explain the significance of these policies and their safety.

Okatani: Japan’s relations with China and South Korea remain strained. This is not a good situation from the standpoint of security and peace in East Asia. What do you think should be done to resolve the deadlock?

Kishida: China and South Korea are important neighbors. Unfortunately, there are thorny issues between Japan and both countries. But, precisely because these issues exist, dialogue between the leaders of Japan and these nations is important. It’s also important to explain to the international community how Japan feels about the current situation and what it is doing about it. I will continue to stress that Japan’s door to dialogue is always open.

Kishida: As a member of the government, I don’t want to comment on the nature of the debates in the Diet. But I feel that the government needs to continue to make efforts to explain the meaning, content and impact of the law in order to ensure that the public fully understands it.

Okatani: The ordinary session of the Diet will open in late January. I imagine that the debate on authorizing the exercise of the right of collective defense will be heated. You are the leader of the Kochikai, a mainstream conservative faction of the LDP that has promoted a lightly armed military and a focus on the economy. As such, how do you regard the issue of the right of collective self-defense?

Kishida: I’m proud of the history of the Kochikai, which has been described as “dovish” and “liberal” over the years. But when it comes to security and the preservation of people’s lives and property, the things that have to be done must be dealt with by going beyond labels like “conservative,” “liberal,” “dove” and “hawk.” I’d like to underscore the Kochikai’s philosophy while looking back at the role the faction has played in the areas of the perception of history and our relations with our neighbors.

Okatani: So, you mean we have to be prepared to preserve peace.

Kishida: The debate on the right of collective defense is still going on. But the reality is that it’s not so easy for a nation to ensure the safety of its people by itself. When you factor in terrorism, the safety of the people can be secured precisely because the international community as a whole is stable. I feel this notion is important now.

First of all, it’s important to gain the understanding of a broad segment of the public. In order to do that, it’s important to thoroughly debate the issue. The role of the Kochikai should be to contribute to a thorough debate within the party on the issue of the right of collective self-defense.

Fumio Kishida
Born in 1957. Graduate of the Faculty of Law at Waseda University. Elected to the House of Representatives in 1993 after working for a bank and serving as secretary to his father, Rep. Fumitake Kishida. Reelected six times. Has served as vice minister of the Ministry of Education, Culture, Sports, Science and Technology; Minister of State for Okinawa and Northern Territories Affairs; Minister of State for Consumer Affairs and Food Safety, and chair of the Liberal Democratic Party’s Diet Affairs Committee. Assumed his current post in December 2012.