Fukushima and Hiroshima, Three Years After the Nuclear Accident, Part 1 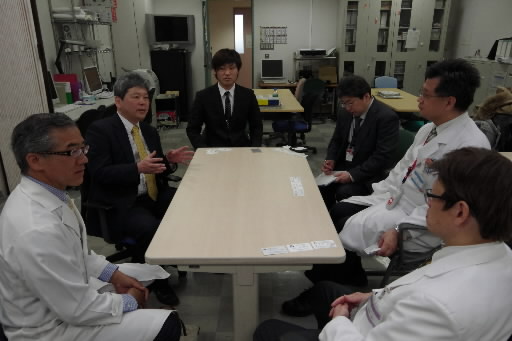 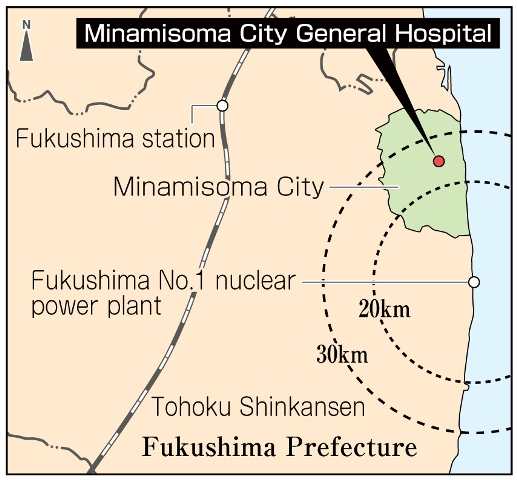 Almost three years have passed since the accident at the Fukushima No. 1 (Daiichi) nuclear power plant. In Fukushima Prefecture, which has suffered from a range of radiation-related damage, many people still live as evacuees, anxious about their health. Some have remained in their hometowns, working to rehabilitate their communities. Others have given up the idea of returning home and are seeking compensation from the Japanese government. What can Hiroshima, a city that has also experienced nuclear damage, do for Fukushima? The Chugoku Shimbun reports on the situation today.

“After the accident at the nuclear power plant, many of the veteran doctors left the hospital, probably fearing exposure to radiation. We don’t have enough people to serve in leadership roles, so I’m filling in, even though I don’t have enough experience or expertise,” said Yoichiro Ikeda, 28, a physical therapist working at Minamisoma City General Hospital in Fukushima Prefecture. He spoke during a visit to Hiroshima University Hospital, located in Minami Ward, Hiroshima, in late February.

Mr. Ikeda, set to begin a training program at Hiroshima University Hospital in April, was explaining the situation at his hospital to the doctors in Hiroshima, who will be in charge of his training. Two years have passed since he moved from a local health care facility for elderly people to the general hospital in 2012. The expression on his face clearly conveys his determination to fulfill his role.

Minamisoma City Hospital is a key hospital in the city of Minamisoma, which has a population of about 64,000. Located 23 kilometers from the nuclear power plant, it is the closest hospital to the stricken site.

Before the earthquake, there were 12 people on the hospital’s rehabilitation staff, but many of them have left since the disaster. At one time, the number fell to a mere three. Even today, there are few experienced or mid-level staff members. Therefore, Mr. Ikeda and other staff in their late 20s must assume responsibility for teaching, too.

Tomoyoshi Oikawa, the deputy director of Minamisoma City General Hospital, is in charge of coordinating the training. “Besides Tokyo, the cities concerned about health care in Fukushima are Hiroshima and Nagasaki, which experienced the atomic bombings,” he said. “We are greatly encouraged by their support.”

Health care needs in the earthquake-affected areas are continually changing. In the immediate aftermath of the nuclear accident, there was a particular need for medical doctors and technicians who specialize in examining internal exposure to radiation, to make up for hospital staff who had evacuated.

To bolster support for these areas, the number of physicians has been increased. Today there are more doctors at Minamisoma City General Hospital than before the earthquake, and the number of nurses has reached about 90 percent of the previous level. However, as in the case of physical therapists, the hospital still faces a shortage of more experienced personnel who can assume leadership roles. The number of inpatients suffering from cerebral apoplexy has spiked to 2.4 times (per 100,000 residents) as many as before the earthquake, possibly due to the prolonged period of evacuation. Rehabilitation and home care are expected to grow in importance.

Masaharu Fujishima, 68, president of an association of residents who live in temporary housing in Minamisoma, said, “Among the 174 families in our association, six people have died in the last two years. The evacuees have become inactive since they can no longer work on their farms. They also suffer from a lack of sleep because they wake up easily when they hear a neighbor’s footsteps during the night. Health care for the evacuees is a major issue.”

Yukio Urabe, a professor at Hiroshima University’s graduate school (Department of Sports Rehabilitation) who lent support to the health services in Minamisoma after the earthquake, regularly visits the temporary accommodations for evacuees to offer advice and interviews them to pinpoint emerging needs. “We must understand how the relationships among the residents affect their health in this long displacement,” he said. “Three years since the earthquake, this is what is needed.”