Fukushima and Hiroshima, Three Years After the Nuclear Accident, Part 2 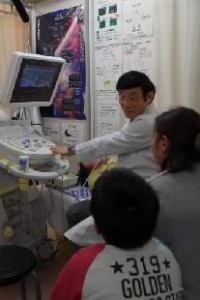 “It’s not cancer,” Dr. Nobuo Takeichi said in early February, speaking kindly to a girl and her family who had come from the city of Fukushima to his clinic in Minami Ward, Hiroshima. He was showing them the ultrasound images of her thyroid gland. The girl smiled, and mother and daughter embraced.

Following the nuclear accident at the Fukushima No. 1 (Daiichi) nuclear power plant, Fukushima Prefecture conducted a health management survey, targeting everyone 18 or younger at the time of the disaster. When the girl received a health examination in 2012, she was categorized as “A2,” the second lightest of the four categories. A notice was mailed to her, which stated: “There is a small lump or cyst, but additional testing is not necessary at this time.”

The family, though, did not feel comfortable waiting two years for the next round of examinations and asked a hospital in the city of Fukushima to reexamine her. The hospital, however, declined their request, saying that if the girl had undergone the examination conducted by the prefecture, she did not need to be examined again. The family was given no further explanation about her condition, and was also unable to obtain her ultrasound images. They were told to submit an information disclosure request in order to obtain them. A sense of mistrust mounted.

Learning about Dr. Takeichi, who is providing thyroid examinations free of charge for children from the earthquake-affected areas, the family visited his clinic for the first time last August. Half a year had passed since then. The mother said, “It’s reassuring, sitting together with my daughter to hear the doctor’s explanation. He shows us the images, too.” They hope to continue paying visits to Hiroshima so the girl’s health can be checked.

By the end of January, 155 people from Fukushima Prefecture had received examinations at Dr. Takeichi’s clinic. Three years have passed since the earthquake, but he continues to see new patients who wish to be examined. Koyo Daiichi Clinic in Asakita Ward, Hiroshima, has also examined about 10 people, who visit the clinic regularly.

As of early February, Fukushima Prefecture had conducted examinations on roughly 254,000 people. Of this number, 33 people have been diagnosed with thyroid cancer. It is not known whether these cases can be attributed to the nuclear accident.

As Hiroshima has a wealth of expertise when it comes to the medical care of A-bomb survivors, which includes radiation-related diseases, there are high hopes for the city to play an important role in shedding light on the cause of these illnesses. It must be noted, however, that the atomic bombings are different from nuclear accidents because the former release high levels of radiation in an instant while the latter result in low doses of radiation exposure over a long period of time. A different form of health management, and know-how, are therefore needed.

In mid-February, Hiroshima University’s Research Institute for Radiation Biology and Medicine (RIRBM), located in Minami Ward, Hiroshima, signed an agreement to form professional ties with a research institute in Belarus, which has studied the high incidence of thyroid cancer due to low-level radiation exposure following the accident at the nuclear power plant in Chernobyl. A lot can be learned from the experience of Belarus, which has managed to reduce the rate of recurrence through various efforts, such as drawing accurate maps to indicate areas of contamination and conducting frequent health examinations for high-risk individuals.

Toshiya Inaba, the director of RIRBM and a member of the committee assessing the health management survey, commented, “Hiroshima has an important role to play in offering its expertise to Fukushima. We would like to learn from Belarus to lend support to Fukushima.”