Fukushima and Hiroshima, Three Years After the Nuclear Accident, Part 3 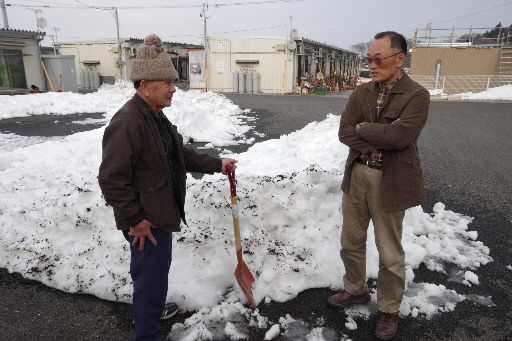 Compensation could be based on Atomic Bomb Survivors’ Relief Law

Snow still lay on the ground in the city of Fukushima in late February. In a temporary housing unit, evacuees from Iitate, Fukushima Prefecture, sat around a kotatsu, a low table with a heater underneath, covered with a quilt. “Many people are now giving up the idea of returning home,” they said somberly. Due to the radiation contamination caused by the accident at the Fukushima No. 1 (Daiichi) nuclear power plant, the former villagers of the town of Iitate are all still living as evacuees.

A few days before, Hiroshi Kanno, 65, who heads up a group of villagers called “Magenedo Iitate!” (“Never Give Up, Iitate!”), had visited the village to see his house, located in a zone where living is restricted. The rooms were covered with mold, and the rusty water supply was not functioning. Decontamination work in the area had made little headway. He was no longer sure if he could ever go home for good.

Fujio Watanabe, 60, a member of the “Magenedo” group, said, “Even after the decontamination work is done, we won’t feel safe going home until the radiation levels go down, and that will mean more years. Instead of spending money on decontamination, we want the government to spend more money on supporting us so we can rebuild our lives in the communities where we now live.”

The members of the group fear that the village authorities may declare that it is “safe to return” to the town before the level of radiation falls to a point where they can feel safe. In this event, the evacuation will become “voluntary,” and the compensation they receive from the Tokyo Electric Power Company will eventually be cut off. They were driven from their homes as a result of the accident at the nuclear plant, which was constructed in line with the policy of the Japanese government. Therefore, some are calling on the government to play a more active role in providing financial support to those who have been displaced. The Act on Compensation for Nuclear Damages, however, sets the ceiling of compensation from the government at 120 billion yen per nuclear power station.

The members of the villagers’ group are concerned about their health and their livelihoods in the future. They have taken note of the Atomic Bomb Survivors’ Relief Law, which has made possible a maximum monthly allowance of about 130,000 yen per person, paid by the national government, as well as an exemption for medical expenses. They believe this law could serve as a model for creating a relief system for the victims of the nuclear accident.

Last summer Mr. Kanno visited Hiroshima and was advised by experts: “The Japanese government does not easily acknowledge cause and effect. You must maintain your own records, which you’ll need in the future.” The villagers’ group now tells its members, via its newsletters and on various occasions, to keep records of their health examinations.

In 1980, a report issued by the “Informal Gathering to Discuss Fundamental Problems of the Atomic Bomb Survivors” set a direction for the Japanese government to implement measures to support the A-bomb survivors. It stated that damages from the war must be endured, with the exception of nuclear damage, and based on this report, the government provided compensation to the survivors of Hiroshima and Nagasaki. Tadatoshi Akiba, the former mayor of Hiroshima, commented, “It is a matter of course that the national government should provide compensation for nuclear damage caused in times of peace, too. The local autonomies, particularly Fukushima Prefecture, must take the lead.”

Mr. Kanno, however, said that the government is putting more priority on decontamination work, seeking to restore the population of local communities, rather than providing compensation to individuals. Opinions vary among the affected people, and a movement calling for compensation from the national government has not gained momentum in Fukushima.

Noriyuki Kawano, a professor at Hiroshima University’s Institute for Peace Science, said, “In Hiroshima and Nagasaki, people of all parties have united and persistently called for the abolition of nuclear weapons and improvements to relief measures at the annual memorial ceremonies.” He went on to say that the people of Fukushima Prefecture must unite as well and that learning more about how A-bomb survivors gained their rights should be helpful to this cause.