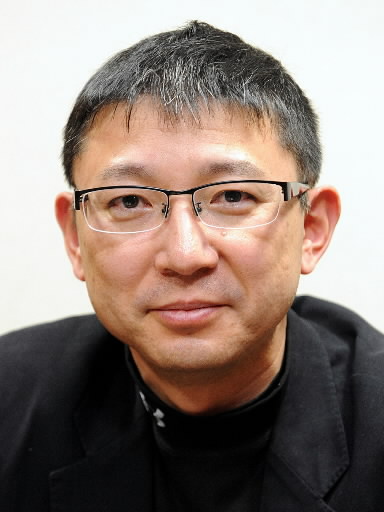 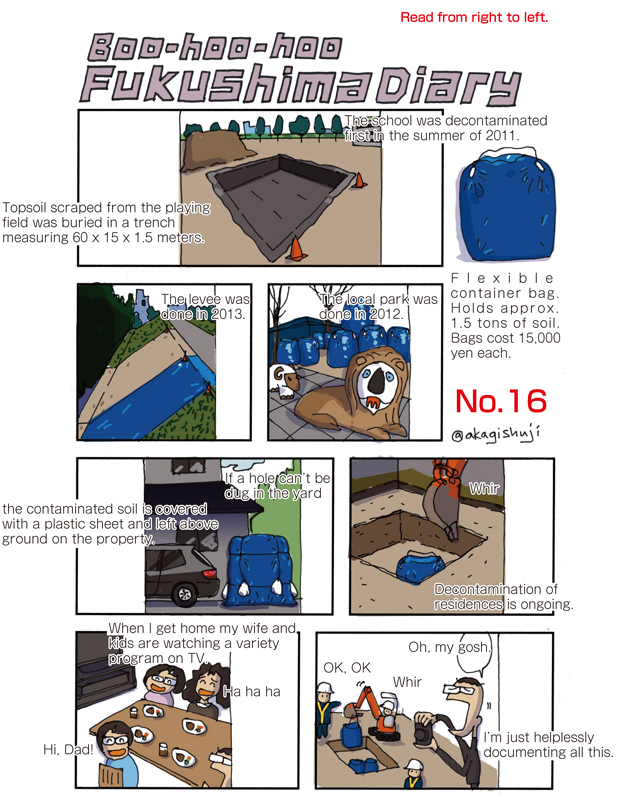 Fifteen editions of the “Boo-hoo-hoo Fukushima Diary,” a series of cartoons and essays by Shuji Akagi, 46, an art teacher at a high school in Fukushima City, were carried in the lifestyle pages of the morning edition of the Chugoku Shimbun through March of last year. On the third anniversary of the accident at the nuclear power plant, Mr. Akagi provided his 16th report from Fukushima.

This is not about one of the towns in the evacuated area where there’s no one left. This is about Fukushima City, the prefectural capital with a population of more than 280,000, where people are going about their everyday lives as usual.

The school was decontaminated first. I observed that in June 2011. A huge hole was dug in the schoolyard. Parks and other facilities that are frequently used by the public were decontaminated next, followed by residences in districts with high levels of radiation.

No one will take the contaminated soil. There’s no place to put it in the densely populated city. So, as a rule, it must be temporarily stored on the premises of schools and residences. When the contaminated soil can’t be buried in the yard on account of water, tree roots or pipes, residents just cover it with uncontaminated soil and a plastic sheet and leave it there, supposedly until an interim disposal facility is decided on.

[As of February 1] about 30 percent of the 95,000 homes and businesses in Fukushima City have been decontaminated. It is expected to take another two and a half years to do the rest.

When you walk around the areas that have been decontaminated, at every house you see where soil was buried or a mound of contaminated soil covered by a plastic sheet. The things I see can’t help but seem historically unusual to me.

But a lot of office workers and students who work hard from early morning to late at night have almost no opportunity to see the work being done from 9 to 5. It may be that they don’t want to see it. When I was a student, my photography teacher said, “People only see what they want to see.”

My family relocated to the city of Aizu Wakamatsu in Fukushima Prefecture. Whenever I get home, my wife and our two daughters, a first-year junior high school student and a fourth grader in elementary school, are watching a variety show produced in Tokyo and laughing as if nothing had ever happened.

While wondering if I’m the only one whose perceptions are off, I continue to photograph as many of these scenes around Fukushima City as I can, with the idea that my photos may someday have historical value.

The first 15 editions of “Boo-hoo-hoo Fukushima Diary” are available in both Japanese and English on this website under “Features” for 2013.

Exhibitions of photos by Mr. Akagi entitled “The Soil by the Side of the Road” are being held at the Yamaneko Cafe and Bisou restaurant in Onomichi in eastern Hiroshima Prefecture. Both exhibitions feature about 30 photos taken by Mr. Akagi over the past three years including shots of the decontamination work in Fukushima City. The photos will be on display through March 30. About 130 of Mr. Akagi’s photos will also be exhibited at the Onomichi Central Library from April 2 through April 13. All three exhibitions are free and are being sponsored by Reikodo, a local compact disc shop. For further information, call Nobue at (090) 1336-4757.