Far from Home: 60 Years After the H-bomb test at Bikini Atoll, Part 2 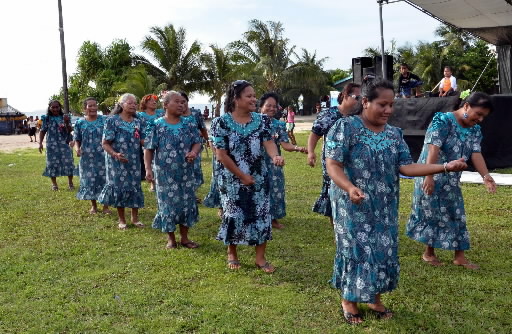 On March 1, the government of the Marshall Islands, located in the Pacific Ocean, held a memorial ceremony for the victims of the hydrogen bomb test that took place at Bikini Atoll on March 1, 1954. A group of women who were born on Rongelap Atoll came to Delap Park, located in the city center of the capital, Majuro. Wearing formal muumuu dresses, they performed traditional dances to the sound of lively music.

Suffering from the effects of residual radiation from the H-bomb blast, the Rongelap islanders left their homeland for good in 1985. Since then, 29 years have passed. One of the members of the women’s group and a former senator, Abacca Maddison, 47, told me that their culture is an integral part of their lives and that at every ceremonial occasion, they try to convey their indigenous wisdom and values.

The former islanders of Rongelap and their descendants live in groups of several hundred people on the islands of Majuro, Mejatto, and Ebeye. Those who live on Ebeye work at a nearby U.S. base. As it is customary for them to visit relatives for extended stays, the local government is unable to determine the precise number of people.

Vercina Kallie, 22, is a college freshman in Majuro. Her grandfather was born on Rongelap. While she expressed pride for her homeland without hesitation, she shared mixed feelings about living there: “My life is based in Majuro. There are no stores on Rongelap. It would be fine to visit there for a short time, but...” Maintaining love for her homeland, which she has never visited, and carrying on its culture and traditions, seem a challenge.

The situation is more complex for the former islanders who were exposed to the radioactive fallout. Nerje Joseph, 66, experienced hair loss and other effects. She said, “For many years, I’ve dreamed of returning to my home on that beautiful island. I would like to die on my native island and be buried according to Marshallese tradition.” Ms. Joseph, however, has decided not to go back for now. “I have come to the conclusion that my biggest priority is my children and grandchildren. I can’t feel confident that the island is safe enough.”

Ms. Joseph and others like her have suffered bitter experiences. Three years after the H-bomb test, they returned home, believing in the assurances of safety made by the United States, but then were beset by cancers and abnormal pregnancies. Ms. Joseph herself experienced two miscarriages.

The resettlement plan promoted by the Rongelap Atoll Local Government has removed only the surface soil in the residential area, which is a mere six percent of the island. Many of the former islanders feel that the land is still unsafe.

From the end of February to March, to coincide with the 60th anniversary of the hydrogen bomb test, the Japan Council against Atomic and Hydrogen Bombs (Gensuikyo) offered medical consultations in Majuro for former islanders. Only three people out of 30 said they wanted to go back to Rongelap Island immediately. Of the 20 who said they did not want to return, 15 cited their fear of residual radiation.

In addition to Gensuikyo’s medical consultations, Hiroko Aihara, 46, a freelance journalist from the city of Fukushima, interviewed the former islanders on her own. “I can’t make an easy comparison between the two, but we share similar anxiety about the effects of invisible radiation,” she said, referring to the victims of the accident at the Fukushima No. 1 (Daiichi) nuclear power plant.

Rongelap Atoll
Rongelap Atoll is one of 29 atolls in the Marshall Islands, located in the Pacific Ocean. The main island of the atoll is Rongelap Island. Due to the hydrogen bomb test conducted by the United States on March 1, 1954, 86 islanders (including 4 babies in the womb) were exposed to a large amount of radioactive fallout. Two days later, the islanders were evacuated by U.S. ship. In 1957, the United States declared the island “safe,” and many people returned. A number of them, though, suffered cancers and abnormal pregnancies. In 1985, all 325 residents left Rongelap for Mejatto Island, which had been uninhabited, lying about 200 kilometers south of Rongelap.