Far from Home: 60 Years After the H-bomb test at Bikini Atoll, Part 3 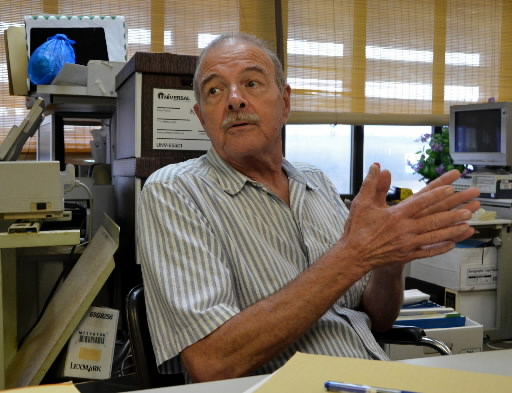 Hopes for solidarity with Hiroshima to call for compensation

The Nuclear Claims Tribunal is located in Majuro, the capital of the Marshall Islands in the Pacific Ocean. In the tribunal’s office, surrounded by disorderly piles of documents, Bill Graham, 67, said bitterly, “The fund is depleted. A part-time worker is scanning the past documents. That’s the only thing being done here.” He is a former staff member from the United States.

The tribunal is an organization that certifies the damage caused by the hydrogen bomb test conducted by the United States in 1954, including damage to human health, such as cancer and leukemia, and damage to land and other properties, and provides compensation. When the Marshall Islands became an independent state in 1986 from a trust territory administered by the United States, the U.S. government provided 150 million dollars (equivalent to about 24 billion yen at the time) to operate the fund. When the fund was depleted in 2009, the organization’s activities virtually ceased.

Even after the tribunal stopped functioning, applications for filing damages continued to come in. The government of the Marshall Islands then asked the United Nations Human Rights Council to investigate the matter. In September 2012, the Council released a special report urging the United States to provide additional compensation. The United States, however, has not taken any action, and the situation is now at a standstill.

Due to the residual radiation from the fallout, all the islanders left Rongelap Atoll. Kenneth Kedi, 42, a senator elected from Rongelap, says, “We are still fighting this negative legacy. The U.S. government has not fulfilled its responsibility.” He said indignantly that people cannot return to the island without further decontamination of the soil and better infrastructure.

Mr. Kedi said that the compensation paid to the people affected by nuclear tests in the U.S. state of Nevada is about 15 times as much as what has been paid to the people in the Marshall Islands. If the U.S. government does not agree to pay additional compensation, he is prepared to wage a long battle of lawsuits in the United States against the companies and research institutes that were involved in the nuclear tests.

A small island nation in the Pacific Ocean is demanding that the United States, a superpower, compensate for the nuclear damage it caused. Sixty years have passed since the hydrogen bomb test, but a resolution to the problem is still not in sight. Tony de Brum, 69, the Minister in Assistance to the Marshall Islands President and third in power, said, “If the nuclear victims all unite, can’t we have a stronger voice?”

He was referring to solidarity with Hiroshima. When President Christopher Loeak visited Japan in February, he paid his first official visit to Hiroshima at his own request and called for solidarity with the A-bombed city.

On July 1, 1946, eleven months after the atomic bombing of Hiroshima, the United States began performing atomic and hydrogen bomb tests in the Marshall Islands. From 1946 to 1958, 67 tests were conducted in the region. Hiroshima and the Marshall Islands lie about 4,000 kilometers apart across the Pacific Ocean, but the two nations are linked by the history of U.S. nuclear development. Seiichiro Takemine, 37, associate professor at Meisei University and co-chair of the Global Hibakusha sub-committee of the Peace Studies Association of Japan, said, “As the nuclear damage in the Marshall Islands is not known to the world, it may well be forgotten. I would like Hiroshima, which is recognized widely, to take the lead in promoting solidarity among the nuclear victims and speak out on their behalf.”