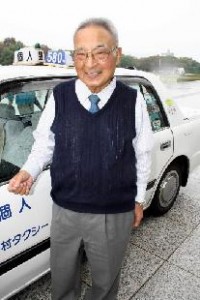 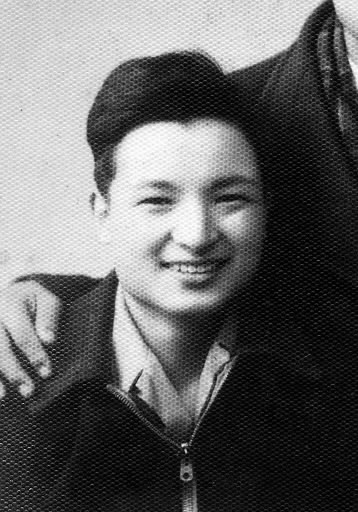 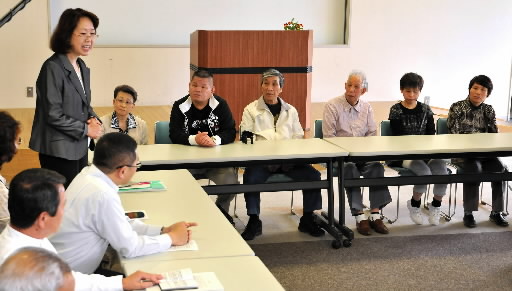 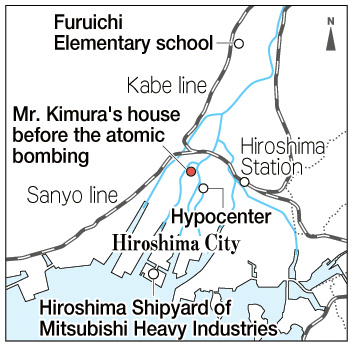 Father and younger sisters lost to the atomic bomb

Left school to start working / Shares experience in his tax

Iwao Kimura, 79, who was exposed to the atomic bomb when he was 13, shares his experiences with customers while working as a taxi driver. "It was an enormous catastrophe that can't be imagined by looking at the city today," he said. "I want to convey that fact, even if only a little."

On the day of the bombing, he was in the Hiroshima Shipyard of Mitsubishi Heavy Industries (located in present-day Naka Ward), 4.3 kilometers from the hypocenter. Because of the shortage of workers for the war effort, students, including Mr. Kimura, had been mobilized to help. He was waiting for the signal to start working when the bomb flashed and the blast hit. He quickly covered his head. Leaving the building, he saw the mushroom cloud rising above the city. He was worried about his family so he tried to return home to the Hirosekita area, about 1 kilometer from the hypocenter, but he wasn’t able to approach his house due to the heat from the fire that had erupted. He retreated back to the shipyard, where he spent a sleepless night in an air raid shelter.

He was reunited with his parents at an evacuation site, Furuichi Elementary School in today's Asaminami Ward. His father suffered only light injuries, but his mother had fallen unconscious as a result of burns and broken bones. He had seven siblings, who met a range of fates. An older brother, 18, was off fighting the war, while two other siblings had been evacuated before the bombing when groups of students left the city. An older sister, 16, who he was still living with, went missing, while a 2-year-old sister died near his home. His 6-year-old brother was at Tenma Elementary School when the bomb exploded, and his 4-year-old sister was trapped under their fallen house. His father was frantic to rescue her, but when the fire drew near, his father's friend pulled him away. "I could feel my father's pain," Mr. Kimura said, explaining that when he learned about this incident after his father's death, he cried and cried.

Soon after the relief he felt at being reunited with his parents, his father developed spots on his body and his hair fell out. These were the effects of the radiation he was exposed to when he went searching through the city for family members. He passed away on September 5. On a bank of the river near his school, he said goodbye as his father was cremated. "How will I go on now?" he wondered. It took all his strength just to stand there. Even now, when he passes by that river bank, he thinks of his father and says a prayer to the Buddha.

After the war, Mr. Kimura went to live at a relative's house, along with his mother and remaining siblings. His mother had recovered from her injuries and was now working to provide for her children. Later, the family lived in a shack that they built in the Tenma area. The following spring, his younger brother Yuji, now 65, was born. But he was a tiny baby that could be held in two hands. It was eventually learned, with Yuji experiencing a delay in his development, that he had been exposed to the atomic bomb while in the womb and suffered A-bomb microcephaly.

Mr. Kimura stopped going to school in order to work and lessen the burden his mother was bearing. When he was 16 years old, he wanted to strike out on his own and so he left Hiroshima for Osaka. He worked in a bakery, baking cakes and pies.

At the age of 29, he returned to Hiroshima and started working as a taxi driver. But until he reached his late 30s, he was reluctant to talk about his experience of the bombing, for fear of being discriminated against. At the same time, he felt resentment toward his father for being unable to save his younger sister.

However, when he met a passenger who was eager to hear about his experience, he came to feel encouraged to speak out more. "It's because I became a taxi driver that I can talk about my experience of the atomic bombing," he said. “Being a taxi driver is my calling, and maybe it's my mission, too." As for his brother Yuji, he works for a dry cleaner. Because his mother, who took care of Yuji for many years, died in 1985, and his younger sister passed away in 2007, Mr. Kimura is now concerned about what the future holds for Yuji.

Mr. Kimura said he doesn't hold a grudge because of the bombing. He added, however, "If the atomic bomb was used to test its effects on human beings, that would be a terrible thing." And as a message for today's youth, he said, "I hope you will do all you can so a foolish war like that isn't fought again. Study hard and strengthen your thoughts for peace." (Sakiko Masuda, Staff Writer)

When the United States dropped the atomic bombs on Hiroshima and Nagasaki, many babies were exposed to these weapons while in their mother's womb. As a result, a number of them came to be born with the disorder known as "A-bomb microcephaly." The cause of the condition was their exposure to high levels of radiation while in an early stage of development as an embryo. The size of the head is smaller for such patients, compared to ordinary people, and they often suffer from mental and physical disabilities. According to the Ministry of Health, Labor and Welfare, there are 22 patients with A-bomb microcephaly living in Japan as of the end of March 2011. They are known as "the youngest atomic bomb victims."

It took 20 years, after the bombings, for the existence of A-bomb microcephaly patients to become widely known. At first, the Atomic Bomb Casualty Commission (ABCC), now the Radiation Effects Research Foundation, told the patients' families that the disorder was caused by malnutrition during pregnancy, not by the atomic bombing.

In 1965, a group of writers and journalists called the "Hiroshima Research Group" published the book "Kono sekai no katasumi de" ("In One Corner of the World"), which brought the existence of microcephalic patients, who had long been left in shadow, out into the light. With this as inspiration, the patients and their families formed the "Mushroom Club" and began to lobby the government. Then, in 1967, the government finally admitted that their disorder was a consequence of the atomic bombings.

Microcephalic patients have suffered from the damage wrought by nuclear radiation from the time of their birth. While their ties to society are tenuous due to fears of prejudice and discrimination, they now face the problem of growing old and losing their parents. The government has a duty to strengthen the support measures for these individuals.

Impressed at his strength to move forward into the future
Mr. Kimura told us that he doesn't hold a grudge because of the atomic bombing. At first, I had trouble believing that as I thought surely all the A-bomb survivors hold a grudge.

Mr. Kimura has a younger brother who suffers from A-bomb microcephaly. Even though the disease was caused by the bombing, he thinks about how to support his brother rather than feeling angry about what happened.

Since the bombing, he has striven hard to go on living. I was very impressed to see him smiling and saying, "I'm grateful to have lived this long." I felt the strength of his way of thinking, holding gratitude in importance while moving forward into the future. (Yumi Kimura, 15)

Blessed to be living in this era
I think it's incredible that Mr. Kimura began working to help support his family after his father died. He was the same age as me at the time. In Japan today, we have plenty of food and we can't imagine losing a family member to war. I think we're really blessed to be born in this era.

As my generation will inherit the future, I think it's our responsibility to see that we never fight another war. I want to do all that I can to help build a peaceful society and avoid repeating the misery brought about by events like the atomic bombing. To start, I plan to tell my friends not to fight when conflict breaks out around me. (Naho Shigeta, 13)

I met Iwao Kimura for the first time on March 10, 2010. I happened to step into his taxi. I only spoke to him briefly then, but the story he told about his younger brother with A-bomb microcephaly left a strong impression on me. At the time, I only knew about the issue of microcephaly from the newspaper and TV. My conversation with Mr. Kimura drove home to me the reality of these patients who have been suffering this form of nuclear damage since they were born.

Since then, I have had opportunities to report on the issue. This past May, I met Mr. Kimura again at a meeting of the "Mushroom Club," which consists of patients, family members, and supporters. I was able to listen to his story at length.

Apparently, the 22 patients in Japan with A-bomb microcephaly suffer from varying symptoms. In some cases the cause of their condition, whether or not related to the atomic bombing, cannot be confirmed. As I interact with these individuals whose futures were stolen away when they were just embryos, I feel anger toward the atomic bombs and I realize keenly the horror of nuclear weapons.

A junior writer once asked me: "Why do we have to hand down the A-bomb experience?" This time, another junior writer, a junior high school student, accompanied me when I interviewed Mr. Kimura. Afterwards, the student said, "Even though 66 years have passed, it's now clear to me that the damage from the atomic bomb still continues today." We should see the reality of the atomic bombing as a problem here in the present, not simply a historical event.

Peace Seeds has been covering issues in connection with building peace for the future. At the same time, we should focus more on our starting point, the atomic bombing. Through this new series in which we listen to A-bomb experiences, I would like us to consider what role we can play as residents of the city which suffered the world's first nuclear attack. (Sakiko Masuda, Staff Writer)