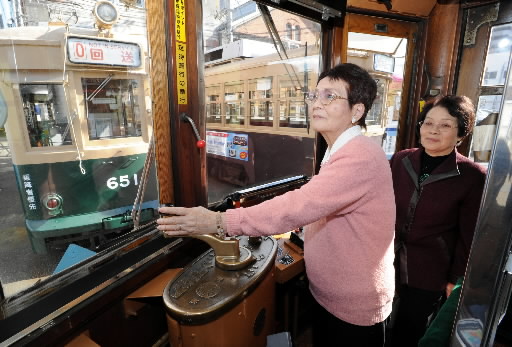 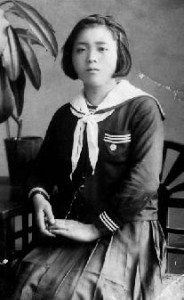 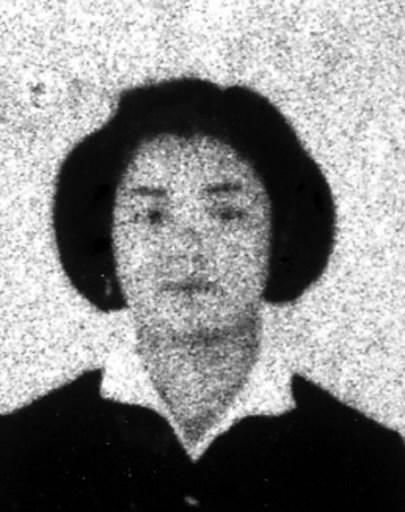 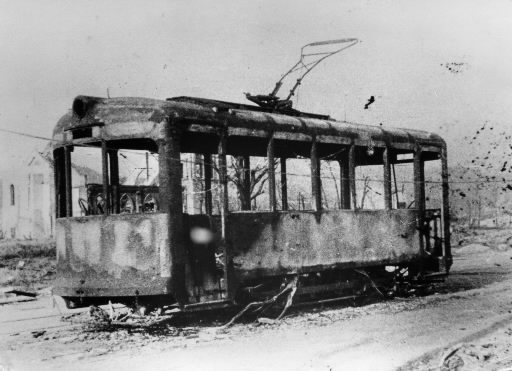 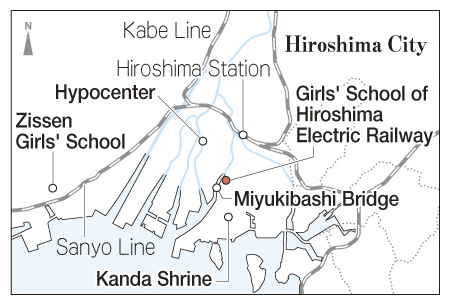 Indelible scars on the body, in the mind

Operating streetcars during the war: Helping each other reach an evacuation site

The atomic bombing left Sachiko Masuno (maiden name, Konishi), now 81, with 114 scars on her back. She was 15 years old at the time of the bombing. Flying fragments of glass pierced her entire back and she suffered a bad burn to her right leg. In the aftermath of the blast, her cousin Toyoko Kodama (maiden name, Ameda), 83, who, like Ms. Masuno, was born in the town of Miyoshi, brought her to an evacuation site, practically having to drag her there.

Both women were students at a girls' school, located in Minami Ward, that was established by the Hiroshima Electric Railway Company during the war, because many men had been drafted to fight on the front lines. The girls studied half the day, then worked as drivers or conductors on the city's streetcars for the other half. Near the end of the war, however, their lessons dropped off and they were working on the streetcars most of the day.

When the atomic bomb exploded, at 8:15 a.m. on August 6, 1945, Ms. Kodama was operating a streetcar, moving in the direction of Ujina Port and approaching the Miyukibashi Bridge. The moment she opened the streetcar door, she was blown from the vehicle. After coming to, she found herself in an air raid shelter. Her head was bleeding.

Meanwhile, Ms. Masuno worked until midnight on August 5, and she was scheduled to start working again from 5:30 a.m. on August 6. But she had a bad stomachache that morning and took the day off. She was sleeping in the dormitory when something struck her head and she woke up. The ceiling was gone and there was dark rubble and dust around her. She fled to the Kyobashigawa River, near the dormitory, and was cooling the burn on her leg when she realized that her back was bleeding profusely.

Following the instructions of school officials, the two girls hurried to Kanda Shrine in Ujina and reunited there. That evening, they moved to Zissen Girls' High School in the village of Inokuchi (now, part of Nishi Ward), which had been designated the evacuation site for the Hiroshima Electric Railway. In only her bare feet, Ms. Masuno was walking down the hot road, suffering the pain of her wounded back and leg. Again and again she would stop and sit, saying, "I'm ready to die, so just leave me here and go on." But Ms. Kodama urged her to keep going, telling her "Don't talk like that; you have to fight," and helped her reach the evacuation site.

There, in a hallway of the school, Ms. Masuno lay on her stomach and endured the pain in her back. Ms. Kodama, with a bandage wrapped around her head, went back to work on August 9, serving on a streetcar that had started running again between Koi and Nishitenma. She also helped carry the bodies of those who died at the evacuation site to be cremated out on a hill behind the building.

By the spring of 1948, Ms. Masuno had recovered from her injuries and began working in a cotton mill in the city of Himeji in Hyogo Prefecture. While bathing with coworkers in a company dormitory, she heard whispers about the scars on her back. When asked about them, she answered, "I was in Hiroshima when it was bombed." Her coworkers quickly left the room over fears that they would be "infected." She was left distraught and in tears, thinking, "If only there had been no war, no atomic bomb..."

Today there is the plight of the people of Fukushima, who themselves are suffering from groundless rumors due to the accident at the Fukishima No. 1 nuclear power plant. Ms. Masuno empathizes with their pain, saying, "They're not responsible for that situation." As for the young people of Hiroshima, she hopes they will give the city their support and help hand down Hiroshima's legacy. (Rie Nii, Staff Writer)

During the war, the Hiroshima Electric Railway Company opened a school for girls in April 1943 in order to maintain a work force for the streetcars because their male drivers and conductors had been drafted into military service. The school building and the dormitory were located in Minami Ward, Hiroshima.

After graduating from national "advanced elementary school" at the age of 14, the girls enrolled in the school's three-year program. Students there went to classes for half the day, and worked on the streetcars for the other half. However, at the tail end of the war, the schedule changed and they were working as drivers or conductors from early morning until late at night.

On the day of the atomic bombing, most of the school's 300 students were either working on streetcars or in their dormitory, which was located 2.1 kilometers from the hypocenter. Twenty-nine students and one teacher were killed in the blast.

Three days later, when train operations resumed between Koi and Nishitenma, students who escaped serious injury were put in charge of the streetcars. After the war, the school's objective of addressing the shortage of male workers was over and the school was closed. Two A-bombed streetcars still run through the city today, mainly on weekday mornings.

Before, when I heard the words "war is wrong," I wasn't entirely convinced. But when I heard their story, I got to thinking how I wouldn't want to experience a life like that, feeling threatened by air raids and hiding in an air raid shelter. (Yuka Ichimura, 15)

I've seen a play about the streetcar that started running again only three days after the atomic bombing. I was surprised to find out that the streetcar was operated by Ms. Kodama. (Arata Kouno, 14)

Ms. Masuno and Ms. Kodama were just teenagers when they were helping to operate the streetcars running through the city. I was surprised when they told me that the work was "fun." While working as conductors, they found it hard to handle the so-called "pole," a hand-held device for maintaining the electrical current, but they enjoyed waving to their classmates driving by on other streetcars and they liked ringing the warning bell. At the time, there weren't many streetcars operating and they ran slowly, at 10 kilometers per hour, so they weren't that difficult to drive. Working on the streetcars also offered them the opportunity to hear a variety of news from passengers on days when they didn't have the chance to read a newspaper or listen to the radio. Examples include: "It seems Kure was hit by a massive air raid" and "I hear that a lot of people in Okinawa have chosen to commit suicide rather than surrender."

Through their work, they also had romantic encounters. In that era, a young man and woman would hesitate to walk together for fear of being seen by others, but Ms. Masuno was asked by a boy from the Prefectural Industrial School to join him to see a movie in Hatchobori. After the movie, they said goodbye to each other at the exit. Then, around November 1945, when the wounds on her back and leg had healed, she boarded the streetcar to return to school. The school had since closed, but she worked as a conductor on the Miyajima line for a while. During this time, the boy she had seen the movie with got on her streetcar and she enjoyed chatting with him. They never even held hands, but to this day they still exchange New Year's greeting cards. Meanwhile, one military doctor took an interest in Ms. Kodama and he approached Ms. Masuno to ask about Ms. Kodama's work schedule. She heard from her classmate that the doctor said "I'm leaving for the front on August 5." Recalling that time, Ms. Kodama smiled and said, "I'd like to find out what became of him, but I guess it's better to leave things as they were." Ms. Masuno is grateful to Ms. Kodama for saving her life. They remain close friends, and even today, Ms. Kodama will stay overnight with Ms. Masuno or the pair will go on trips together. (Rie Nii, Staff Writer)