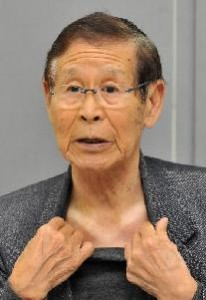 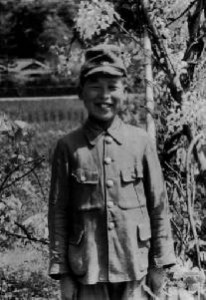 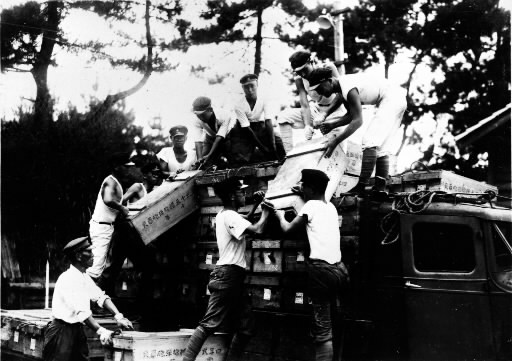 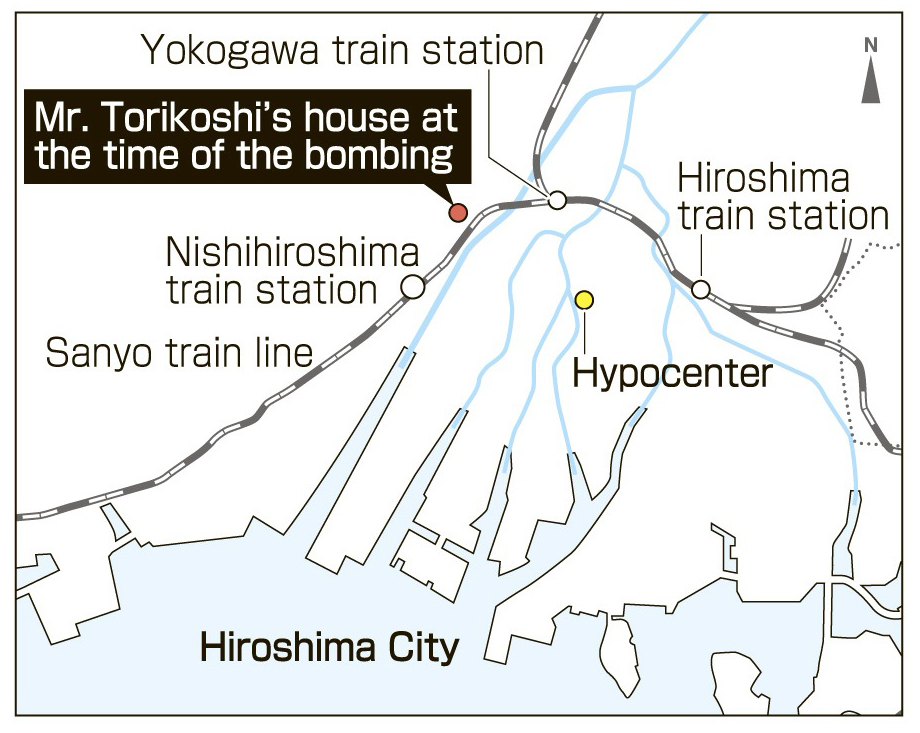 Scar on neck is ever-present reminder

Critical condition from bomb's heat rays: Plays harmonica with thoughts of his mother

Every time Fujio Torikoshi, 80, removes his clothes when taking a bath, he sees the keloid scar on his neck in the mirror. The sight jolts him back to August 6, the day of the atomic bombing. He has mixed feelings about sharing his story, wanting to forget what happened and yet believing he must recall his experience to hand down his account to others. "I'm already 80 now," he said, "and it's just something I'd like to forget..."

Mr. Torikoshi was born and raised in the Yamate section of Hiroshima, now part of Nishi Ward. His house was located at the foot of a mountain, and from its elevated site he had a full view of the downtown area.

In 1945 he was 14 years old. On the morning of August 6 he was at home, about to head to the hospital to retake a physical exam instead of going to work with other students mobilized for the war effort.

Hearing the sound of American planes, he stepped out of the house. He was looking up in the sky, to the east, when he spotted a dark object in the air above the city center. At that moment he saw a tremendous flash and a wave of heat, like the heat from a blazing fire, struck his face. A roaring wind, the bomb's shock wave, then slammed into him and blew him 7 or 8 meters into the air, to a water cistern intended for fighting fires.

He was wearing a V-neck T-shirt, with short sleeves, and long pants, and he felt pain on his uncovered face and arms. His mother was at home, and she wasn't injured in the blast, so she rushed to him and brought him to an air raid shelter in their yard.

As he slipped in and out of consciousness, his face swelled and he could no longer see. That afternoon, a neighbor took him to a hospital in the nearby city of Hatsukaichi. He came home with his face wrapped in bandages.

He was unconscious for a few days, after August 7, and suffered from a high fever and bleeding. Then he finally came to again, sensing light through his bandages and hearing his mother singing to him. His face was still swollen, though, so he was unable to open his mouth. His mother chewed up food for him and fed it to him using a straw.

In October, he was hospitalized near his maternal grandparents' house in the city of Iwakuni. The next spring he was discharged and he enrolled at a junior high school there. His new classmates teased him about his face, dark red in color, telling him, "You have a funny red face!"

Influenced by his older brother, who was a teacher at the high school and university level, Mr. Torikoshi became a teacher, too, in the spring of 1952. But he didn't want others to see his keloid, so he would wear shirts that covered his neck, even during swimming lessons.

While he was in the hospital, his mother gave him a harmonica. Thinking "I want to learn to play the song my mother was singing when I regained consciousness," after his retirement in 1991, Mr. Torikoshi became engrossed in playing his harmonica. Now he teaches harmonica lessons at his home and performs in concerts around the Chugoku region. "I feel happy that I'm still breathing," he said. "I'm grateful that I survived. I hope children will feel appreciation for their lives." As he plays the harmonica, he thinks of his mother, who loved him so deeply. (Rie Nii, Staff Writer)

During World War II, particularly towards the end of the war, Japanese teens were compelled to work at munitions factories and help clean up the debris of buildings that were demolished to create fire lanes. They were known as "mobilized students" and they attended few, if any, classes.

This mobilization was imposed on students who were of junior high school age and above; in other words, older than 12 or 13. In August 1941, by the order of the Ministry of Education, students were mobilized into groups to support the war effort. As the war intensified, they were forced to work longer hours, and in March 1944, they began working full days throughout the year.

In Hiroshima, older students were directed to work at munitions factories, where they made parts for ships and planes, or they sewed military uniforms at their schools. Starting in November 1944, they helped demolish houses and buildings in order to create fire breaks in the event of air raids.

According to an exhibition held at Hiroshima Peace Memorial Museum in 2004, of the total of roughly 26,800 mobilized students in Hiroshima, about 7,200 of them perished in the atomic bombing. Some 5,900 of the dead were working at demolition sites near the hypocenter.

The future is our responsibility
I was left with a strong impression when he said, "Human beings make war; dogs and cats don't fight wars." Someday the children of today will be adults making decisions for society. I feel this responsibility for how we shape the future will be in our own hands. (Reiko Takaya, 14)

Mr. Torikoshi was told by a doctor at the hospital in Iwakuni: "At most, you'll live until the age of 20." After he began working as an elementary school teacher, he was operated on twice for his keloid and then continued to teach while battling an A-bomb illness that saw the number of his white blood cells dwindle. "It can't be helped if I die any time," he thought, but when he reached his 40th birthday, he felt, "I was able to live this long, so I want to live as long as I can," and he started jogging.

He then trained to take part in a national track and field meet for athletes over the age of 40. He set a new Japanese record for a distance of 800 meters for men in their 50s. He was a fast runner, and even in his 60s, he ran 100 meters in 12.7 seconds.

Three years ago, he developed myelodysplastic syndrome, an incurable disease, and the following year underwent two kidney operations. "But it's important that I stay positive," he said. "I want to keep smiling and continue challenging and stretching myself." In this way, he enjoys playing and teaching the harmonica, skiing, and playing golf. (Rie Nii, Staff Writer)