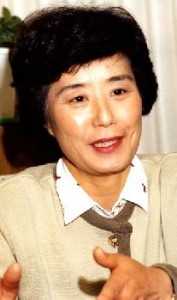 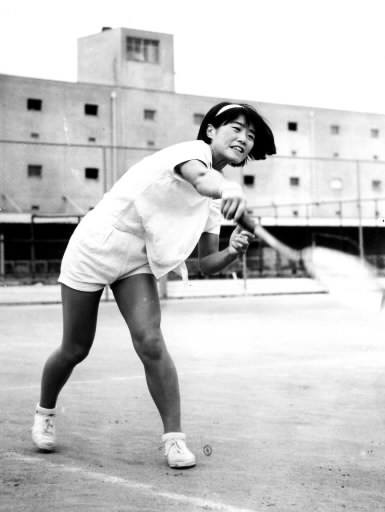 
Happiness found in normal everyday life
“I'll be 50 soon,” said Hiroko Fujii to her bedridden mother. Her mother, whose right side is now paralyzed and has come to find speaking difficult, responded with only a short “Oh.” On August 6, 1945, Ms. Fujii's mother, who had given birth just minutes before the atomic bombing, was pelted by the black rain in a sewage canal as she held her baby, not yet named, in her arms.

The fourth daughter of Torao Tomita and his wife Yoshiko, residents of the Nakahiro area of Hiroshima, was born at about 8 a.m. on August 6. Right after the newborn baby was given her first bath and the midwife left, there was a flash in the sky. Flying fragments of glass pierced Torao's back as he was looking at the baby. The roof of their house caved in and the baby was blown to a corner of the room, crying, but unharmed beneath a sewing machine. The couple's third daughter, who was four, had run to a neighbor's house after the birth to spread the good news. She was trapped under the neighbor's house when it collapsed and she never returned home.

Hiroko Fujii was that infant and she is undoubtedly the youngest A-bomb survivor to have directly experienced the atomic bombing. Naturally, she has no memory of the event. Since she was a small child, Ms. Fujii has never suffered a serious illness. As a member of the “soft tennis” team at Hiroshima Girls' School of Commerce, she reached the semi-finals of a national high school tournament. After graduation, she worked as a clerk for a company in Hiroshima for four years.

Ms. Fujii gave encouragement to the A-bomb survivors, as they pursued the reconstruction of the devastated city. She appeared in the media on a number of occasions and was nicknamed “Pikako-chan,” which meant “Flash Girl.” She wasn't bothered by this, even though her friends took up calling her “Pika-chan.” However, as she grew older, she came to feel burdened by the interview requests from newspaper companies and TV stations. Since marrying at the age of 23, she has avoided all interviews.

Her husband had been a regular customer at her mother's restaurant. A year before their wedding, he rented space at a paint factory in Hiroshima and launched a sheet metal business. In the years that followed, they had a son and a daughter. Beyond her roles as mother and homemaker, Ms. Fujii has also helped with the accounting for her husband's business and stood by with tools to assist with the disassembly of automobiles.

“We have only one employee,” Ms. Fujii said. “We're muddling along, doing our best to pay the wages on time.” In the 12th year of their marriage her husband bought a piece of land, that had been leased by Ms. Fujii's parents, of 115 square meters in size. A three-story building was constructed and their new life began. Ms. Fujii now lives with her husband, her parents, and her children, and the family members enjoy lively conversations. Ms. Fujii laughed and said, “I feel happiest in my normal everyday life.”

Last summer, Ms. Fujii paid tribute to her older sister, Hiromi, at a memorial service on the 50th anniversary of her death. Hiromi's gravestone, which stands on the grounds of a temple in downtown Hiroshima, is inscribed with the words “Died on August 6, 1945.” “My 'birthday' is my sister's 'deathday,'” Ms. Fujii said. Although she doesn't deliberately avoid the topic of the atomic bombing, she rarely brings up the subject. On the day of the memorial service, too, Ms. Fujii spent the anniversary making lighter conversation.

At one point Ms. Fujii's mother told her: “We took the 'Hiro' from Hiromi for your name.” Ms. Fujii does not wish to think of herself as a reincarnation of her older sister. Still, she feels strongly that “Somehow I was given the chance to go on living.” “It must have been very hard,” Ms. Fujii said, imagining the chaos caused by the atomic bombing, the process of reconstructing the family, and their health concerns that have lingered long after the blast. After giving birth to two children and serving as the primary caregiver, Ms. Fujii came to understand her mother's struggles for the first time. When her mother Yoshiko, 77, fell ill four years ago, then her father Torao, 83, suffered poor health of his own last summer, someone who knows the family history told her: “You have to do all you can for your parents.”

As August approaches, old friends remember her and telephone Ms. Fujii. However, the idea that her birthday is somehow tied to “destiny” is too heavy a weight, she feels. On her birthday last year, too, she simply did what she does every year: stop her housework and put her hands together in prayer.

On this occasion, for the first time in 26 years, Ms. Fujii agreed to an interview, with her family's consent. After the interview, her parting words to me were: “Please tell them Pika is fine.” I wondered to whom her message was meant. Her eyes, which shone with her strong spirit, were wet with tears at the time.

Fifty years have passed since the atomic bomb exploded and Hiroshima was turned into a hell on earth. For those who fled under the mushroom cloud, and managed to survive, their lives were irrevocably changed since that moment. Even when they seem to have lived in a calm manner from that point forward, the scars that remain hidden in memory have been hard to heal. What has become of the survivors who once appeared in the pages of the Chugoku Shimbun and offered testimony about the era? The Chugoku Shimbun will revisit those who have survived for the half century since the atomic bombing.

As of the end of October 1994, there were 33 people in Hiroshima who were born on August 6, 1945. Some of them undoubtedly moved to the city after the bombing took place, while others with the same birthday have moved away. Meanwhile, the death toll due to the atomic bombing of Hiroshima stood at 236,570 as of the end of fiscal 1992, according to a report compiled by the Ministry of Health and Welfare. However, the precise number of fatalities, including those who died of direct exposure to the atomic bomb, remains unclear.