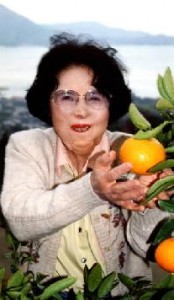 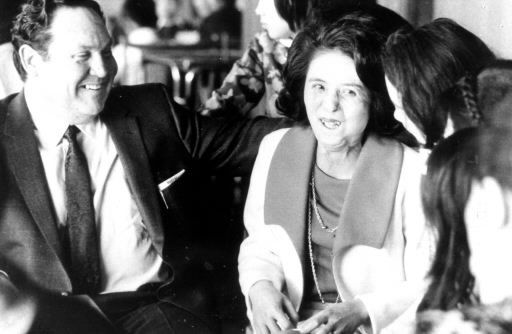 
Healed by husband’s love, now describes memories of life in U.S. in memoir
Hiroko Tasaka began writing her memoir on an island in the Seto Inland Sea, a place colored by mandarin oranges. Five years have passed since she returned to her hometown from the United States after her husband, with whom she lived for 24 years, passed away. Her desire to reflect on the last half century of her life, during which she has carried scars from the atomic bombing, was the impetus to begin her memoir.

“The atomic bomb will continue to create difficulties for me until the day I die,” Ms. Tasaka said. The skin that was grafted to her face in order to conceal her scars stretches tight, preventing her from opening her mouth fully. She vividly recalls the words which slipped from the lips of the late Masao Tsuzuki, a professor at the University of Tokyo, who examined her in the year following the atomic bombing: “This girl wasn't fated to die.”

“Yes, it may be something like fate that has allowed me to live, rather than me surviving on my own,” Ms. Tasaka said.

The image of the glittering body of an airplane flying in the blue sky above Hiroshima is imprinted in her mind's eye. She was near Tsurumi Bridge with girls of the same year from the former Hiroshima Girls’ School of Commerce. They had been mobilized for the war effort, dismantling buildings to create a fire lane in the event of air raids. A voice called: “Here comes B-chan!” “B-chan” was the nickname the girls had given to the U.S. B-29 bomber. “Where is it, Ms. Tasaka?” The moment she heard her friend's voice, Ms. Tasaka glanced up from her work and the bomb exploded.

In the years that followed, she suffered cold stares and multiple surgeries on her face; in one six-month span, she underwent no less than 13 operations. However, her brave facing of such severe hardship spurred her to become independent and she began attending a dressmaking school located in a Hiroshima suburb. Then, ten years after the atomic bombing, she heard the news of a campaign to bring A-bombed women, dubbed “Hiroshima Maidens,” to the United States for medical treatment.

“I had a huge desire to get better, if only a little,” Ms. Tasaka said. “I had no room to hesitate because it was the United States.” She traveled to New York, where the medical treatment was provided. As a living witness of the atomic bombing, the first time human beings had suffered such a fate, Ms. Tasaka and the other women from Hiroshima stunned people across the United States. Their struggles to overcome the hardships wrought by the bombing made a deep impression on Americans. A man named Harry Harris was one of them.

Mr. Harris, who was wounded on a battlefield in Europe, offered encouragement to Ms. Tasaka by visiting her and writing to her. It did not take long for his compassion to evolve into love. However, when he proposed, Ms. Tasaka turned him down. “I thought he was brash,” she said. “Besides, I had these scars. I couldn't imagine marrying.”

Ms. Tasaka returned to Japan a year and a half later and devoted herself to pursuing a career in dressmaking. But Harry Harris did not give up. Love letters continued to arrive. One week, she recalls, she even received three letters. She wrote a letter to again turn down his proposal--looking up every other word in a dictionary to do so--but his letters continued to come. Finally, when she was 33 years old, ten years after Mr. Harris had first proposed, Hiroko accepted on a summer day.

They began their life together in the city of Baltimore in the U.S. state of Maryland. Mr. Harris worked for a newspaper company, transporting newspapers, and Ms. Tasaka found a job in the women's clothing department of a department store. Once in a while, a customer would ask about the scars on her face. As she pinned a dress, Ms. Tasaka would share her experience and the customers responded with regret. She felt comfortable amid the open-minded nature of the American people and American society, where she could speak heart-to-heart with others.

Mr. Harris's love for her never changed. When the couple ran into his friends on the street, he invariably introduced her to them. These small gestures made her happy. Though her husband was always true to his word, their plans to celebrate the 25th anniversary of their wedding with a trip to Hawaii could not be realized. At the age of 68, he died during an operation.

“I decided to forgive the doctor,” Ms. Tasaka said. “I'm sure Harry would be pleased. He was the one who taught me how precious real love is.”

A bust of Mr. Harris is found in her white house, surrounded by groves of mandarin orange trees. She returned to Japan from the United States because she found it hard to live in a place filled with memories of her husband. Only until recently has she begun to feel easy enough to look back on the past. And so she has now finished writing about her A-bomb experience for her memoir.

The other day, a letter came from an acquaintance telling her about an upcoming trip to the United States. The familiar names of places reminded her of her husband's smile. She wrote back to the person with her heart full of feeling: “Please say hello to Baltimore for me.”

Norman Cousins, an American journalist, proposed that young women from Hiroshima, who had been scarred by the atomic bombing, be brought to the United States to receive medical treatment there. In 1955, Japanese and American doctors performed a succession of surgeries. At Mount Sinai Hospital in New York, 25 girls underwent orthopedic treatment.