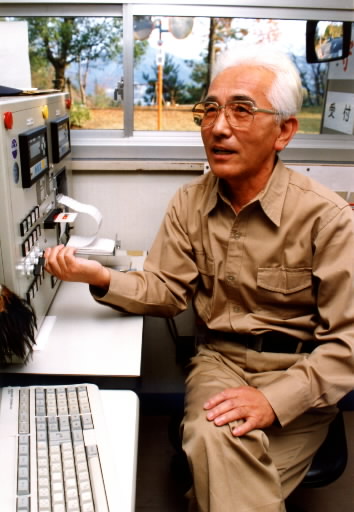 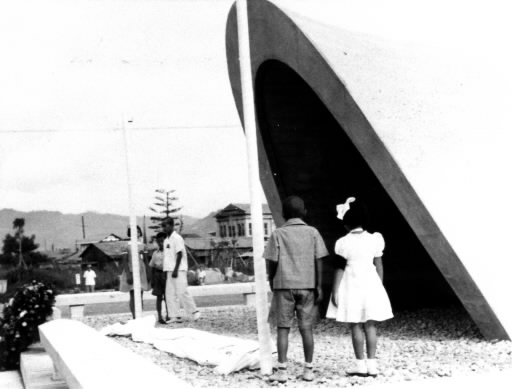 
“Orphan” bears psychological scars and cancer burden
He mused for a while in thought, then Hitomi Ota said: “I guess it was what fate decided.” Although he experienced the atomic bombing at the hypocenter, 500 meters from the spot below where the bomb exploded in the air, he miraculously survived. “Fate,” which lies outside human will, is the only word Mr. Ota can come up with to describe his experience of the bombing.

Back then, Mr. Ota was in the second grade at Fukuromachi National School (now, Hiroshima Municipal Fukuromachi Elementary School), located in the heart of the city. At the time of the bombing, about 60 children in the first and second grades with close-cropped or bobbed hair were gathered in the school yard, which had been halfway turned into a sweet potato field, and they began clearing a wooden school building that lay demolished. Older students were absent, as they were urged to evacuate the city in the spring.

“I happened to be barefoot,” Mr. Ota said, “and my teacher told me that was dangerous. So I went down to the basement of one of the school buildings, where the shoe cubbies were. The bomb exploded when I was running up the stairs with my shoes in my hands.”

He doesn't recall if he was knocked to the ground and lost consciousness. He doesn't recall where his classmates and others in the schoolyard disappeared to. No matter how hard and painstakingly he tries to trace that day in his memory, he is unable to come up with clear answers.

He remembers only piecemeal scenes that he cannot forget, even if he wanted to. Such scenes include: “When I stepped out of the basement of the reinforced concrete school building, which was three stories high, the sun was blazing down”; “I poured water over my head and simply followed the fleeing adults”; “As I was running away, I saw an elderly woman standing rooted at the sight of a burning telephone pole that had toppled over”; and “On that night, from Hijiyama Hill, I saw roaring flames ominously covering the city.”

Last year, Mr. Ota held a rite to commemorate the deaths of family members, equivalent to the Buddhist rite marking the 50th anniversary of a person's death. Six of the nine members of his family, including his father Satoru, then 45, his mother Kameno, then 44, his older sister, and his younger brother, died at home in Nobori-cho in downtown Hiroshima and at other locations.

Mr. Ota said, “Talking about it won't change anything. Besides, I don't want to remember...”

As the subject shifted from his family to his life after the bombing, his words slowed. Even after half a century has passed, the trauma endured by the then eight-year-old boy, who survived the bombing at the hypocenter, has not fully healed.

Standing by while an older brother and sister were taken in by relatives, Mr. Ota was sent to the Hiroshima Prefectural War Orphans Foster Home (now, Ninoshima Gakuen), located in Hiroshima Bay. On his own, he spent his days shaping his “destiny.” To attend the Hiroshima Peace Memorial Ceremony in 1952, when the Cenotaph for the A-bomb Victims was unveiled, Mr. Ota visited the hypocenter for the first time since the day of the bombing, seven years before.

Five children who, like Mr. Ota, had lost their parents unveiled the cenotaph together. “Come to think of it, I took part in a radio interview with a girl. I wonder how she's doing... No, I don't think she would want to see me, either,” declared Mr. Ota at his current workplace, an incineration plant in Asaminami Ward.

Mr. Ota, who once operated a photo studio and then worked as a taxi driver, is now a city employee. Like many other A-bomb survivors, he has lived his life with no time to look back at the past. He has raised two children with his 52-year-old wife. He now finds himself at the age where he is holding grandchildren.

Four years ago, Mr. Ota was diagnosed with stomach cancer. In a series of four operations, his stomach was completely removed. Since then, Mr. Ota has stopped drinking alcohol, which he had enjoyed.

There were two other children who survived the atomic bombing in the basement of Fukuromachi National School. On the 25th anniversary of the bombing, the three reunited at the school. One of them now lives in the city of Osaka, while the other, who ran a sushi restaurant in Shimane Prefecture, passed away two years ago at the age of 57. He died of stomach cancer.

“I feel bad for him,” Mr. Ota said. “But it’s just a coincidence, I think. Otherwise, A-bomb survivors would all be suffering from stomach cancer. I myself don't believe at all that my cancer was an effect of the atomic bombing.” His words were said in parting, with a forced sort of cheerfulness, as if speaking to himself.

According to the Hypocenter Reconstruction Study, in which the Research Institute for Nuclear Medicine and Biology at Hiroshima University reproduced a map, in 1972, showing a 500-meter radius from the hypocenter, 3,662 people were present at the hypocenter at the time of the atomic bombing. Among them, 78 percent died that day, while 97 percent of the survivors were dead by the end of September. Among those 3,662 people, 59 survived beyond that time.